Growing up in England, Beverly Dwyer celebrated Christmas by going to church and spending time with her family, but it wasn’t until she moved to Israel that she fully began to experience the holiness of the holiday.

Back home, “Christmas is a time of great commercialization, a moneymaker for the stores,” said Dwyer, an evangelical Christian who has lived in Israel on and off for 18 years. “The birth of our savior isn’t usually the focus.”

In Israel, “the holiday is much more low-key,” Dwyer said. “You have to make an effort to celebrate. The lack of commercialization and consumerism gives me the opportunity to really reflect on the true meaning of the season.”

Compared with how the holiday is celebrated in Christian-majority countries — with dazzling lights, Christmas-themed shows and sales — the public observance of Christmas in Israel and the Palestinian territories is downright modest.

Christians are a tiny minority in the Holy Land, comprising about 2 percent of the population, not including the many Christian clergy, aid workers, students, migrant workers and asylum-seekers who reside in Israel, sometimes for decades. 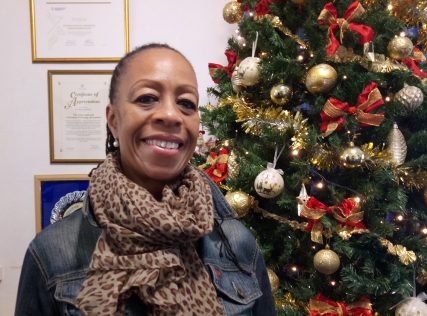 Beverly Dwyer, who has lived in Israel on and off for
18 years, says that in Israel, Christmas is much more
low-key than it is in England, where she grew up.
RNS photo by Michele Chabin

It is possible to find public displays related to Christmas, but you need to look for them.

The municipalities of Bethlehem in the West Bank and Haifa and Nazareth in northern Israel decorate their towns with Christmas lights and organize Christmas-themed events, concerts and bazaars. In south Tel Aviv-Jaffa, the city puts up a big Christmas tree, and stores sell everything from ornaments to Santa suits.

In Jerusalem, Christians celebrate the holiday mostly behind doors, in their homes and churches, and Dwyer considers this a godsend.

“For me, personally, Christmas without external distractions has given me a lot more time to strengthen my relationship with God,” she said. “I can read more, reflect more. I can spend more time in prayer. I’m able to invest myself in my spiritual walk with God.”

The Rev. Petra Heldt, a pastor ordained in the Protestant Church of Germany, feels much the same.

“Here the content is more important than the wrapping. Showing the love of God is the content and the wrapping is the glitter and glamor” of westernized Christmas celebrations, said Heldt, who has lived in Israel for the past 39 years.