25 Years After It’s Beginning, Phil Vischer Has Hope for the Future of VeggieTales

Twenty-five years ago, Phil Vischer had a big idea.

He and a college friend, Mike Nawrocki, had dreamed up a Monty Python-esque Christian cartoon for kids— a mix of silly songs, wisecracks and Bible lessons, delivered by a host of lovable animated vegetables.

Armed with $60,000 borrowed from family and friends, they put together the first episode, working mostly on a computer in Vischer’s spare bedroom.

The first episode, “Where is God When I’m S-Scared?” — starring the comic duo of Bob the Tomato and Larry the Cucumber — debuted just in time for Christmas. Sales were slow at first. Then college kids who worked at Christian bookstores began to play copies of the videos for customers.

Still, 25 years later, VeggieTales lives on. The show had stints on Saturday morning TV and Netflix and even spawned a second film, “The Pirates Who Don’t Do Anything.” It’s currently owned by Universal.

Vischer, who continued to do voices for VeggieTales for years, moved on. He’s become an author, speaker and host of The Holy Post podcast. And he is still making videos about the Bible for kids.

Religion News Service editor Bob Smietana recently caught up with Vischer to discuss the 25thanniversary of VeggieTales and what he’s learned along the way.

This interview has been edited for clarity and length.

What are you up to these days? Are you still involved with VeggieTales? 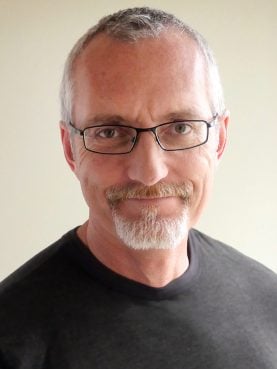 Now that Universal owns VeggieTales, I’m involved in some conversations about if, when or how to bring it back for another round. Nothing is guaranteed yet, but there are some interesting possibilities. Beyond that, I’ve got a small team here in Chicago producing videos to open up the Bible for kids. You can find those videos on RightNow Media and, we hope, some other outlets soon.

Do you miss being closely involved with Bob and Larry? What’s your relationship with them now?

We’re still on speaking terms. Sometimes Bob can be cranky, but Larry will always take my calls. There are always new conversations when VeggieTales ownership transitions, so with Universal now in charge, there’s hope for some new life.

Are you surprised VeggieTales is still around after 25 years?

I was surprised it became as big as it did, but things that become that big tend to stay around for a long time — though part of why it’s still prominent is the lack of other strong content for Christian families, which is a little sad. In the general market, good shows don’t hang around long because there’s always another good show right around the corner. In the Christian market, unfortunately, that hasn’t been the case.

Old cartoon characters don’t die — they just get displaced by newer ones. If Bob and Larry are still on top in another 25 years, well, that’d be a real problem!