US Jesuit Groups Release Names of Priests Accused of Abuse

All U.S.-based provinces of the Society of Jesus are releasing the names of clerics they say are credibly accused of child sex abuse, joining other Catholic institutions that are embracing increased transparency as they rush to respond to the resurgence of the Catholic sex abuse crisis.

The revelations are seen as an important step by the Society of Jesus, the Catholic church’s largest male religious order of priests, commonly referred to as Jesuits, which claims more than 16,000 members worldwide, including the pope. Although it does not represent the whole of Catholicism, the group is deeply influential both inside and outside the church: Jesuits operate or are affiliated with several U.S. colleges and universities, including Boston College, Georgetown University in Washington, D.C., and Santa Clara University in Northern California.

On Monday, the society’s Midwest province in the U.S. published the names of 65 priests it says have an “established allegation” of sexual abuse of children since 1955.

The accused priests were broken down into three categories: 37 accused of sexual abuse of a minor who were investigated while the Jesuit was living or against whom multiple established allegations were received after his death; 18 with a single established allegation received after his death; and 10 whose names have already been published in another place.

A post on the province’s website explained that officials consider an “established allegation” to be “based on the facts and circumstances where there is a reasonable certainty that the accusation is true and that the sexual abuse of a minor has occurred.”

The Very Rev. Brian G. Paulson, provincial of the Midwest province, said in a public letter his organization will conduct an additional investigation of its clergy records in 2019 with the help of Hillard Heintze, a Chicago-based investigative firm. 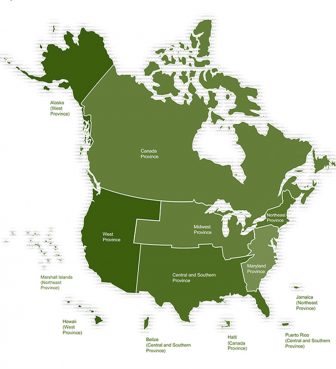 A map of the Jesuit provinces in the United
States and Canada. Image courtesy of
Jesuits.org

“The Midwest Jesuits take this step in the spirit of transparency and reconciliation,” Paulson wrote. “As we look back at our history, the failures of the Society of Jesus and the Church to protect those entrusted to its care fill our hearts with outrage, sorrow and shame. On behalf of the Midwest Jesuits, I apologize to victim-survivors and their families for the harm and suffering you have endured.”

The Maryland province, which stretches from southern New Jersey to Atlanta, also released a list Monday morning of 19 priests accused of child sexual abuse dating back to 1950.

The categories of accused clerics were slightly different in the Maryland province’s report. They comprised priests currently within the province or whose abuse took place in the province; priests who are deceased; and priests against whom an allegation “could not be fully investigated to determine credibility, but for which there is a reasonable possibility (semblance of truth) that the alleged offense occurred.”

The province noted 10 additional priests who have already been listed as accused by other groups but either operated within the Maryland province or were assigned there at some point.