Daytime TV Legend Kathie Lee Gifford Announces She Is Leaving ‘Today’ on April 7, 2019, After 11 Years, in Tearful Farewell During Which She Thanks Her ‘Beautiful Egyptian goddess’ Co-Host Hoda Kotb

Kathie Lee Gifford is stepping down as the host of the fourth hour of Today.

She made the announcement on Tuesday morning alongside her longtime co-host Hoda Kotb.

Gifford has spent the past 11 years at NBC, joining Today to launch the fourth hour alongside Kotb. 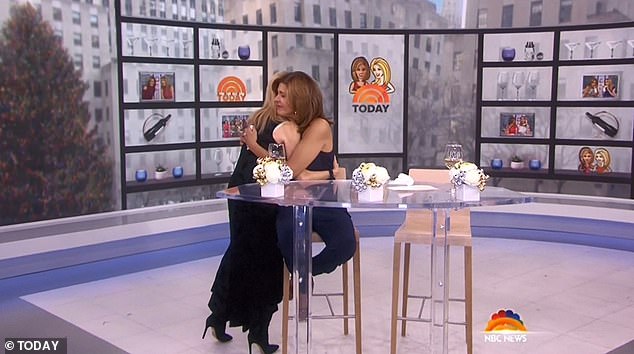 Emotional moment: ‘It’s an exciting time for me … but it’s also hard is because the reason I stayed longer than a year is because I love everybody here,’ said Gifford (above hugging Kotb) 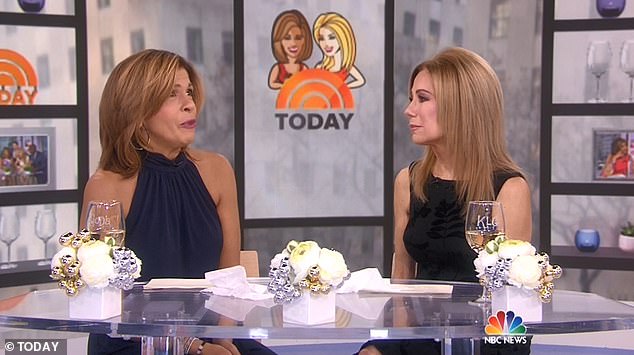 Lots of tears: Kotb noted how everything good that happened in her life came after Gifford picked her to co-host the fourth hour 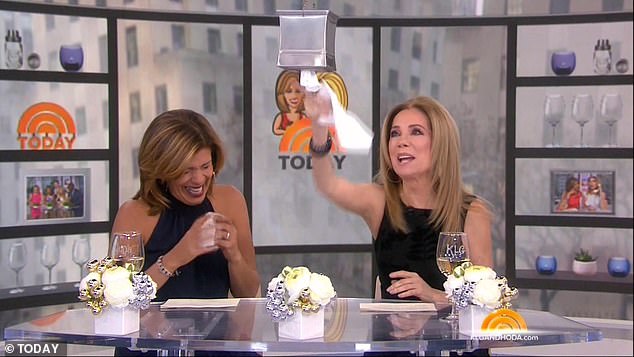 Dry those eyes: The two women then asked Jerry, their faithful grip, to dangle over the box of tissues that the two women sometimes use to dry their eyes

‘I have something to share with everybody. It’s bittersweet as these things always are, but I have been here almost 11 years. Thought I would stay one year. Something happened along the way and I fell in love with a beautiful Egyptian goddess and when it’s our 11th anniversary I will be leaving the “Today” show,’ said Gifford.

‘It’s an exciting time for me and I’m thrilled about the projects coming up, but it’s also hard because the reason I stayed longer than a year is because I love everybody here. I have been in this business for 20 years and never worked with a more beautiful group of people who just give, give, give every day, four hours of live television five days a week.’

She continued: ‘We have fun and we laugh and we support one another and know each other’s kids names and we know when somebody is having a colonoscopy. We do life together and nobody more so than my Hoda.’

That is when Gifford broke down in tears, causing her co-host to do the same.

She then explained that the friendship between the two women would not change and would be just like when she left Regis Philbin on Live With Regis & Kathie Lee, explaining that it brought the two closer.

When it was Kotb’s time to speak she was so overcome with emotion that she had to collect herself multiple times.

‘The minute you stepped into my life, everything changed,’ said Kotb.

The two women then asked Jerry, their faithful grip, to dangle over the box of tissues that the two women sometimes use to dry their eyes.

‘I was writing about the day and I was thinking about everything and you chose me. That’s how it started,’ said Kotb, who is now the anchor of the NBC morning show.

She then noted how in addition to her work success, she met her partner and then adopted her daughter because of Gifford.

The women then shared a hug and got about their business, kicking off the show as if it were any other day. 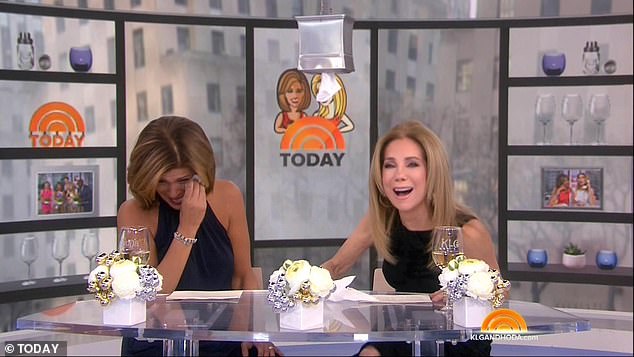 Sharing: ‘I was writing about the day and I was thinking about everything and you chose me. That’s how it started,’ said Kotb 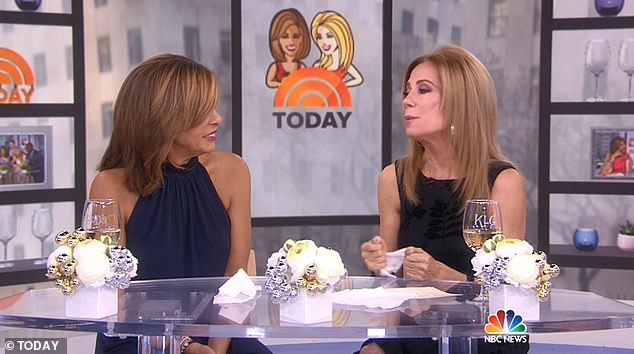 Sharing a moment: Kotb then noted how in addition to her work success, she met her partner and then adopted her daughter because of Gifford. 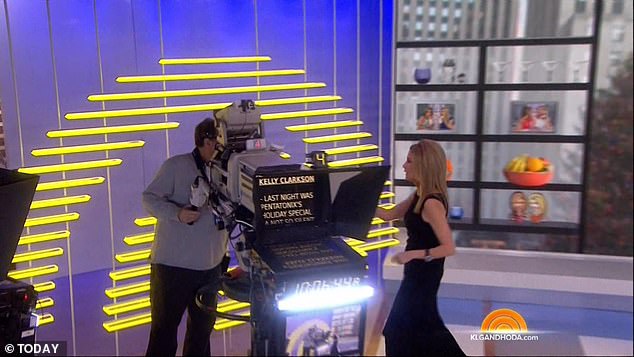 Drying eyes: Gifford pointed out that it was not just the people on camera who were crying and walked over to give one of the camera operators a tissue (above)

Moving on: The women then got to work with the day’s news after their emotional intro (above)

Gifford said she would be leaving on the 11th anniversary, which would be next April.

This could mark the end of Gifford’s illustrious television career.

She got her start back in the 1970s on the game show Name That Tune, in which she performed as a vocalist.

Gifford then found work in a handful of television shows and made appearances on Good Morning America.

She became a household name in 1985 when she was selected to co-host The Morning Show with Regis Philbin.

Gifford remained on at Good Morning America for a few years while working with Philbin on what would soon become one of the most memorable morning shows in television history.

In 1988, The Morning Show was renamed Live With Regis and Kathie Lee. 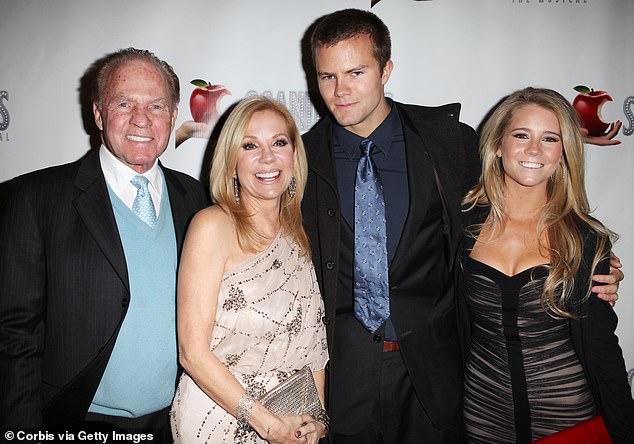 Family life: Gifford often discusses her personal life on the show. Her husband Frank Gifford sadly died in 2015. Here they are pictured together with their children Cody and Cassidy 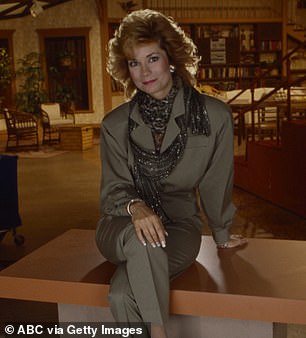 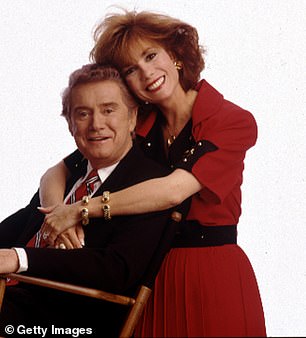 Starting out: Gifford had a long career at ABC before switching to NBC. She’s pictured top in 1986 on GMA and bottom in 1982 on The Morning Show with Regis Philbin

Gifford was on the show for 12 more years before leaving in 2000, saying she wanted to spend more time with her family.

She was replaced by Kelly Ripa, who is now the highest paid woman in morning television.

At the same time, she continued her singing career and launched an ill-fated clothing collection that was later revealed to be made in sweatshops.

Gifford returned to the airwaves in March of 2008 on NBC, joining Kotb to host the fourth hour.

She provided viewers with the same glimpses into her personal life as before, talking about her husband and children and her faith.

Gifford, who was born Kathie Lee Epstein, became a born-again Christian when she was 12 after watching a Billy Graham film.

She went on to marry Christian composer Paul Johnson in 1976 but the two divorced in 1982, one year before she met Frank Gifford.

The former football star was 23 years her senior but the two wed in 1986 and later welcomed a son Cody and a daughter Cassidy.

They remained together for the next 29 years, until Frank passed away in 2015 at their Greenwich home.

Some had speculated Gifford might leave the show then but she stayed on, but will be saying her final farewell in just four months.

And she could be back in a big way next holiday season too, as she has been hard at work on her theatrical adaptation of It’s A Wonderful Life.

NBC INTERNAL MEMO ON THE DEPARTURE OF KATHIE LEE

It is with mixed emotions that I share the news Kathie Lee Gifford has decided it’s time to leave TODAY.

As we all know, Kathie Lee’s plate has been overflowing lately with film, music and book projects, and after giving us eleven extraordinary years, she’s decided to focus her attention full-time on those other creative endeavors.

When we first launched this incredible hour, no one could have predicted the lightning (or rather, wine) in a bottle that is Hoda & Kathie Lee. Whether in studio or on one of their many road trips, they have delighted our audience with their distinct brand of fun, friendship and adventure. During that time, Kathie Lee has cemented her status as one of the most enduring and endearing talents in morning television. In short – she is a legend.

Jimmy Fallon summed it up best when he channelled Kenny Rogers on the tenth anniversary show earlier this year: Through the years, Kathie Lee has never let us down, she’s turned our lives around and she’s brought some of the sweetest days we’ve found…

As Kathie Lee told me today: “In 2008, I joined the TODAY Show family intending to spend one year. But something unexpected happened along the way: I fell in love with a beautiful, talented, extraordinary Egyptian goddess named Hoda, and an amazing group of individuals who work tirelessly and joyfully at their jobs, many of them starting at midnight, creating an unprecedented four hours of live television. I stayed year after year making a million memories with people I will never forget. I leave TODAY with a grateful heart but I’m truly excited for this new creative season in my life. Many thanks to all the wonderful people who made the years fly by.”

Kathie Lee is generously staying with us through the show’s next anniversary, April 7, 2019. We will have much more to share before then about our plans for that hour, which will, of course, continue to include Hoda.

Please join me in congratulating Kathie Lee on a dazzling run at TODAY. We look forward to celebrating her in the months to come.