With the passing of George H.W. Bush from this life, we will have the opportunity to be stirred once again by tales from his lengthy journey. We will hear of his early heroism at war. We will be reminded of his storied political career. We will be touched anew by his tender 73-year marriage. We will be told of his mistakes, and of regrets of a kind familiar to us all.

Yet we will likely hear little about his religious faith, and this is unfortunate.

The truth is that his deep sense of God’s calling lay beneath all that he was and all that he gave us. We should remind ourselves of this part of him, both because it is an act of honor and because his brand of faith offers a needed antidote to some of the toxins of our time.

The faith that shaped his life was first embedded in him by his New England, Episcopal Church upbringing. It is common today to speak of such a heritage with disdain. Yet for Bush, it was the means of receiving a faith that could fashion destinies. He was shaped by the church services and the liturgical seasons and the oft-repeated rituals, of course, but there was more. Each morning when he sat at the family breakfast table, his mother read the Bible aloud. Young George listened, absorbed, and came to regard what he heard as the steely truths of life.

A favorite verse was Proverbs 27:2: “Let another man praise you, and not your own lips.”

It was nearly the Bush family creed. Never vaunt yourself. Never set yourself above. No good will come of it, and God is watching. 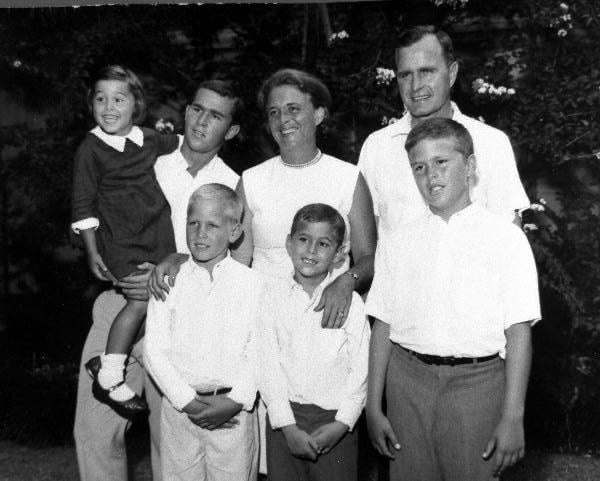 The Bush family in the early 1960s. Photo courtesy
of Creative Commons

Another part of the family canon were the words of Jesus in the gospel of Luke: “To whom much is given, of him much shall be required.” The gifts you have received form a mandate. Show gratitude by serving. Live for a cause greater than yourself.

He stepped into adulthood, then, armed with an elegant version of traditional Christianity and the hard-won maxims for living his parents had wrung from the pages of Scripture. Yet his was a quiet faith, one woven into the fabric of his life but never held aloft as a banner for selfish gain.

Religion was a personal thing. It formed a mandate, yes, but secretly, sounding in a whisper from private places in the soul. It was embarrassing to speak of it publicly.

This was the ethic that carried Bush through valiant service during World War II, through Yale, through years in the oil fields of Texas, and then into his half-century of government service: Congress, the U.N., China, the CIA, the vice presidency and, ultimately, the White House.

Yet it was when he ran for president that his faith was forced, against his will, into public view. This was during the campaign of 1988. Bush faced contests with the popular religious broadcaster Pat Robertson and a charismatic Baptist governor from Arkansas named Bill Clinton.

Though Bush had a deeper resume of public service than any presidential candidate in American history, he seemed — in contrast to Clinton and Robertson — a man churched but perhaps not converted, a man religious but unable to explain the connection to God he said defined his life.

It was all hard to watch.

His own son wrote that though the elder Bush was religious, he was uncomfortable espousing his faith in the public square. This was an understatement. George H.W. Bush was nearly inarticulate in matters of faith.