The bulk of the migrant caravan that started out from Central America this fall has reached the United States’ border with Mexico, and the city of Tijuana is overwhelmed by more than 6,000 people who have arrived, many hoping to gain political asylum in the United States.

Although accustomed to constant traffic across the border, Tijuana is not fully prepared to accept such a large group for an unknown amount of time.  Nonetheless, the Central American migrants have seemingly been welcomed thus far, in part thanks to religious groups that are organizing to help manage the sudden influx. 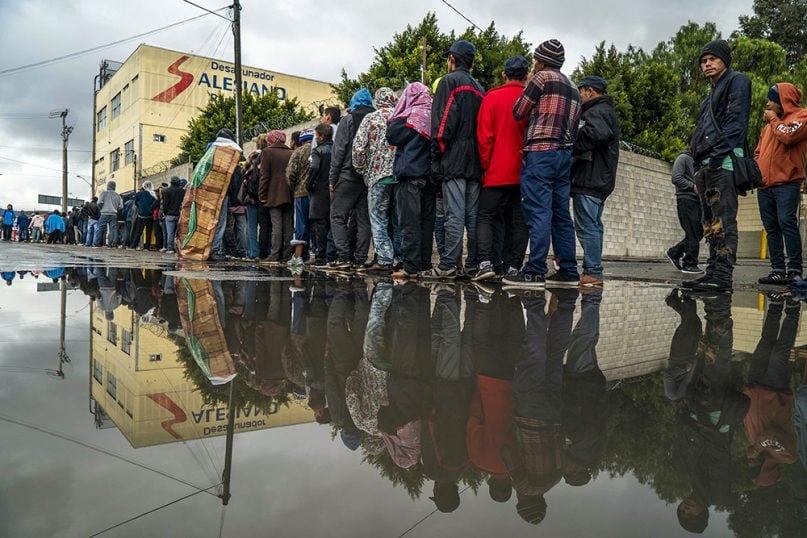 The Salesian Refuge of Tijuana, run by members of the Roman Catholic Salesian order, manages the Padre Chava Refectory, located north of Tijuana, just a few meters from the border. The refectory has been serving meals for more than 19 years. Typically, the Salesians serve 800 breakfasts per day to migrants and street people in Tijuana. However, the group plans to offer three meals per day to help the migrant caravan. Last week the group was already serving more than 1,200 breakfasts alone.

Situations like this are not new for the Salesians, whose main objective is to help vulnerable people and migrants in particular. In late 2016, another migrant group, consisting of about 3,000 Haitians, became stranded at the border. The Salesians helped find shelter for many of them in the Mexican state of Baja California, after they were denied asylum in the U.S. Volunteers with a mobile unit of the Church of the Nazarene in Mexico treat a migrant’s head lice and offer other medical care in Tijuana, Mexico. RNS photo by Jair Cabrera Torres

Similarly, the Church of the Nazarene in Mexico has installed a mobile unit on the outskirts of the Salesian shelter to address the migrants’ medical needs. Many of the Central Americans arrived with lice, bedbugs and a plethora of other ailments after trekking several thousand miles.

Aside from large religious groups, some individuals are proselytizing to migrants, or at least hoping to help with spiritual needs in addition to the myriad external needs the caravan members face. Pastor Jorge Guillermo Santos Ríos offers nightly prayers, and dozens have come asking for a little hope in achieving the American dream.