2,000-Year-Old Ring Thought to Have Belonged to Pontius Pilate

An intriguing 2,000-year-old copper alloy ring bearing the inscription “of Pilatus” may be only the second artifact testifying to the historicity of the infamous Pontius Pilate. Unearthed 50 years ago, the ring was overlooked until recently, when it got a good scrub, and a second look.

Pilate, a Roman prefect who ruled the Roman province of Judaea from circa 26–36 CE, is mentioned in several accounts in the New Testament, as having ordered the trial and crucifixion of Yeshua, a Second Temple-period radical preacher from the Galilee, more commonly known as Jesus.

The ring was first found among hundreds of other artifacts in 1968–1969 excavations directed by archaeologist Gideon Foerster, at a section of Herod’s burial tomb and palace at Herodium that was used during the First Jewish Revolt (66–73 CE). Recently, current dig director Roi Porat asked that the engraved copper sealing ring be given a thorough laboratory cleaning and scholarly examination.

The scientific analysis of the ring was published in the stalwart biannual Israel Exploration Journal last week, by the 104-year-old Israel Exploration Society. It was also popularly publicized — with slightly differing conclusions — on Thursday in Haaretz, under the headline “Ring of Roman Governor Pontius Pilate Who Crucified Jesus Found in Herodion Site in West Bank.” 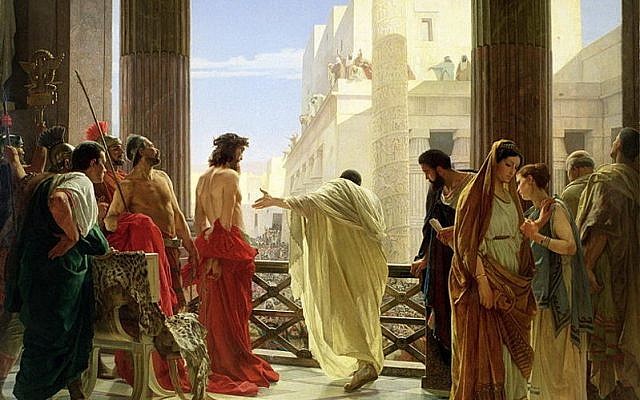 Archaeologist Porat told The Times of Israel on Thursday that to him, all explanations are equally possible for who was the historical owner of the simple copper ring.

“It was important to publish a careful scientific article,” he said. “But in practice we have a ring inscribed with the name Pilate and the personal connection just cries out,” said Porat.

The IEJ’s analysis, “An Inscribed Copper-Alloy Finger Ring from Herodium Depicting a Krater,” was written by a collective of scholars including Kaye Academic College’s Art & Aesthetics Department professor emeritus Shua Amorai-Stark, and several archaeologists and academics from the Hebrew University of Jerusalem: Malka Hershkovitz, Foerster, who excavated the ring, Yakov Kalman, Rachel Chachy, and Porat. Epigrapher Leah DiSegni, also of the Hebrew University, is credited with deciphering the inscription.

While it is unclear exactly when the ring was forged, it was discovered in an eastern garden built on a porch in a room constructed of secondary building materials. The room offered an archaeological layer which dates to no later than 71 CE, with “a wealth of finds,” including an array of glass, ostraca, pottery and decorated mud stoppers, and “an abundance” of metal artifacts, such as iron arrowheads, a large number of First Jewish Revolt coins, and one copper alloy sealing ring. 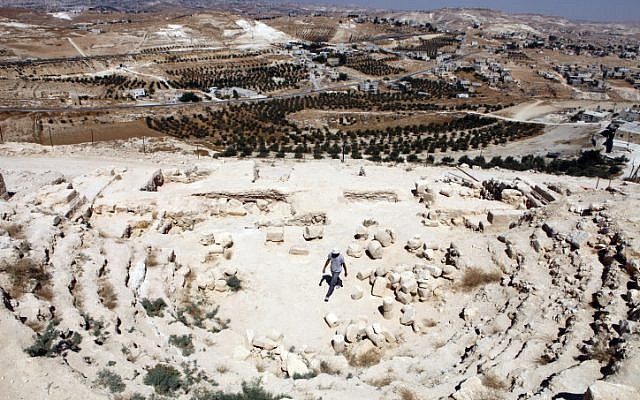 A 2010 view of the mountain fortress of Herodium in the Gush Etzion region, outside of Jerusalem. (Abir Sultan/FLASH90)

At the center of the ring is an engraved krater, a large wine vessel, which is encircled by minute “partly deformed” Greek letters spelling out “of Pilatus.” Interestingly, according to DiSegni, the direction of writing for the two words is different, and one word is “disturbed by a defect” in the metal.

Could this “Pilatus” be the Pontius Pilate described in the New Testament?

According to the scholars, the bezeled ring, which has a narrow outer rim, was cast in one unit by a less-than-expert craftsman. There is evidence that the “mold for this ring was engraved quickly before pouring the melted metal or that the device was not prepared by a master smith,” they write.

The design at the center of the ring, write the authors, was likewise not necessarily elite. They reference a still unpublished clay sealing bulla that was discovered in the Temple Mount Sifting Project and archaeologists have tentatively dated to the first century CE.

The unpublished clay impression has at its center a single vessel, which is described in the IEJ article as “flanked by Greek letters placed in a manner similar to that of the letters on the ring bezel from Herodium. Like the inscription on the ring, the one on the bulla gives the name of a person (or his nickname or title).”