Selena Gomez has left the psychiatric facility on the east coast where she was getting treatment after an emotional breakdown.

The Back To You singer checked out and is ‘laying low’ according to a Wednesday report from TMZ.

The ex of Justin Bieber – who wed Hailey Baldwin in September – was in the facility for one month after checking in in early October. The site added that the treatment involved ‘dialectical behavior therapy,’ which was described as ‘a therapy that treats various mental health disorders.’

In late September, her family reportedly ‘drove her to Cedars-Sinai Medical Center in L.A. for treatment.’

The source added, ‘She was released days later but had to be readmitted the next week because her low blood cell count persisted. She went into a downward emotional spiral.

‘After she was admitted to the hospital for the second time, she demanded to leave. When doctors wouldn’t oblige, she had “a meltdown” and tried ripping the IVs out of her arm. It was characterized to us as “an emotional breakdown,”‘ said the source.

This comes a day after her tattoo artist said she ‘seemed in great spirits’ before taking a break to focus on her mental health.

The Fetish singer’s artist Keith McCurdy revealed he spoke to her not long before her decision and, to him, she was well.

Speaking to Page Six TV, the designer – known as Bang Bang – said: ‘Right before I heard [Selena’s] taking some time to work on her mental health, I talked to her.

‘She was going to come in and get tattoos with a couple of friends and she seemed in great spirits. She sent me a video describing what she wanted to get,’ he said. 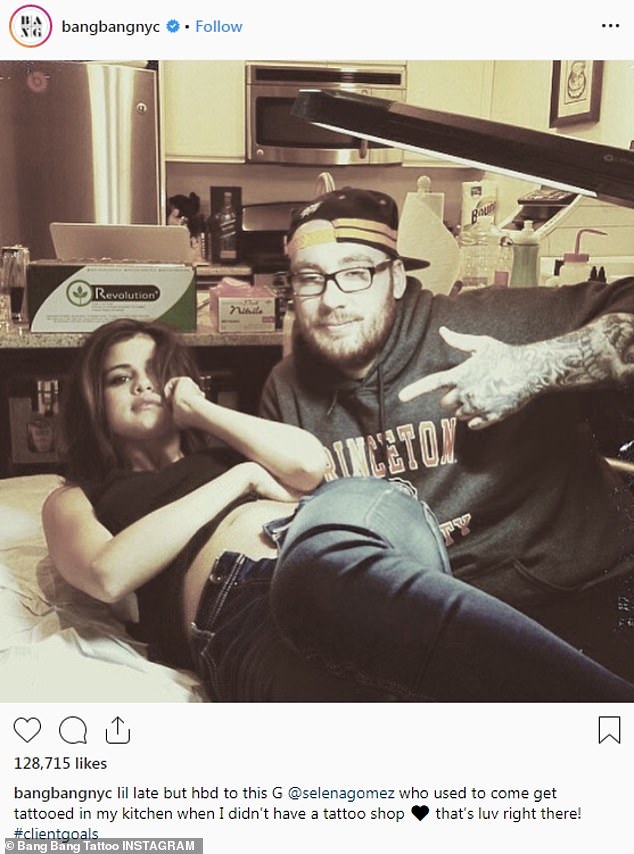 Ready for ink: The artist also worked in his kitchen; here she is seen on a table

Fans have speculated that Selena had a breakdown not over her health but rather over her ex Bieber.

After Selena and Justin split in March, he quickly moved on to Baldwin, 21, whom he had previously dated.

The Purpose singer and the Elle model were inseparable and soon were engaged during a tropical vacation.

In September they wed in a NYC courthouse and a large wedding ceremony is in the planning stages for next year, according to multiple sources.