It Is Revealed That the Pittsburgh Synagogue Shooter Is a Gun-Obsessed Anti-Semite who Believes Trump Is a Puppet for Jewish Interests, as His Disturbing Social Media History Reveals a Fascination with Conspiracy Theories and Pride for His ‘Family of Glock’ Handguns

The 46-year-old shooting suspect accused of killing 11 people at a synagogue in Pittsburgh is a Trump-hating white supremacist who spewed his anti-Semitic views online.

Robert Bowers is accused of opening fire at the Tree of Life Congregation Synagogue in the Squirrel Hill area of Pittsburgh shortly before 10am Saturday.

After the killing spree, he allegedly exchanged gunfire with police and surrendered after being injured in that fight. He was taken to the hospital under police guard and remains there.

In the hours following the shooting, information about Bowers and his hate-filled social media posts have come to light.

An hour before the first reports emerged of the shooting, Bowers posted this on the social media website Gab. He was enraged by HIAS, the Hebrew Immigration Aid Society which helps Jewish migrants settle in the US, and said he couldn’t ‘sit by’ and watch ‘my people get slaughtered’ 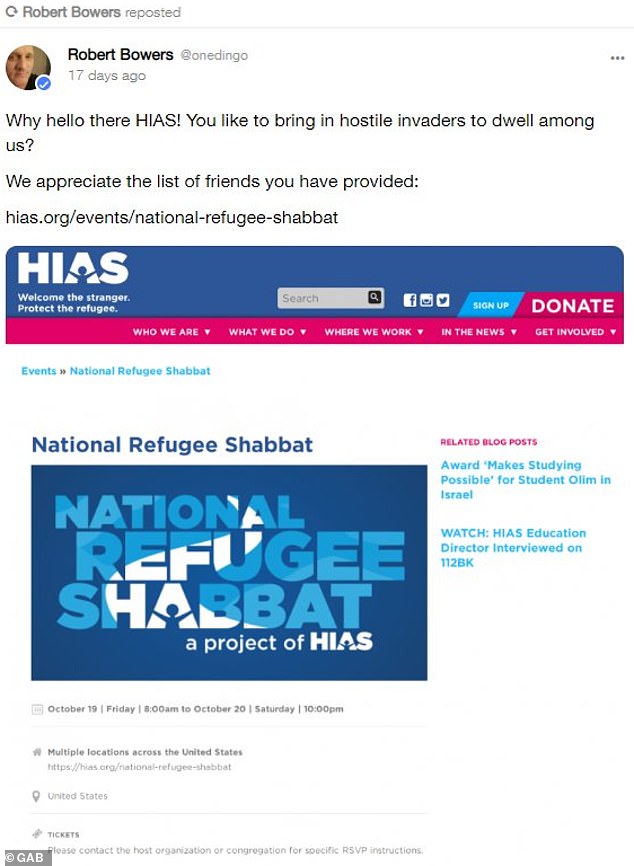 Bowers initially wrote alongside an article 17 days ago: ‘Why hello there HIAS! You like to bring in hostile invaders to dwell among us? We appreciate the list of friends you have provided’

The most revealing are on the social media network Gab, beloved by users because it promises never to censor them or hinder their free speech.

The bio section of his profile, which was quickly deleted after the shooting, reads: ‘jews are the children of satan. (john 8:44) — —- the lord jesus christ is come in the flesh.’