WATCH: The Touching Moment an African-American Dad Befriends His Son’s Bully and Buys Him New Clothes After Learning He Is Struggling Because His Family Is Homeless, Setting a Great Example for His Son and Ultimately Mending the Relationship Between the Two Boys

A Houston man showed love and kindness to the boy bullying his son, only to find out the now-former bully was homeless, so he took action and now the two children have become fast friends.

Aubrey Delinzer, as his name is listed on Facebook, shared a video of him taking the boy, named Tamarion, on a shopping trip that ended with him seated across from his son, Jordan, poised to hash out their differences.

‘Speak your mind, son,’ the tattoo artist says in the clip. ‘This is a meeting. We’re having a meeting.’

The next photo Aubrey shared was of the boys passing a video game controller back and forth, with the words, ‘problem solved’ written across it.

The story quickly went viral on Twitter, where it was viewed over 4.5 million times.

Delinzer used the notoriety he’s gained from sharing the story to start a GoFundMe campaign for Tamarion and his family, who have been living in a hotel. 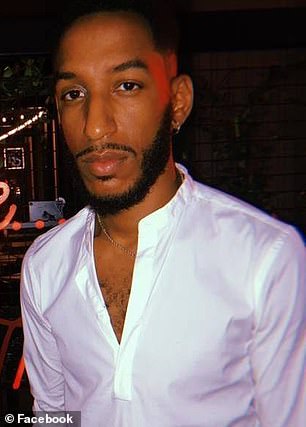 Houston tattoo artist Aubrey Delinzer, as his name is listed on Facebook, showed former bully Tamarion kindness when he picked on his son, Jordan, and learned the child was being bullied, himself, due to being homeless

‘I know you guys can’t see exactly how great things are going for the boys .. but he’s been hanging out with us ever since,’ Delinzer shared in an update to the GoFundMe page on Friday night.

‘Things really turned out phenomenal.. more than I could ever have imagined .. just wanted everybody to know that I appreciate all the love and support from all across the world .. shoutout to you guys .. the boys are having a sleepover next weekend […]  this is really greater than we imagined.’

Delinzer shared with KHOU that he had been bullied when he was younger, which gave him a unique perspective into the situation.

‘It taught me something. I was angry at first, then I said let me try something different,’ Delinzer said. 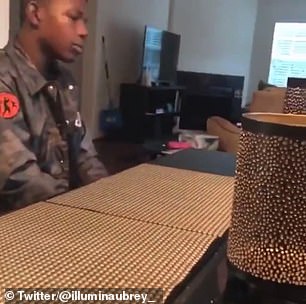 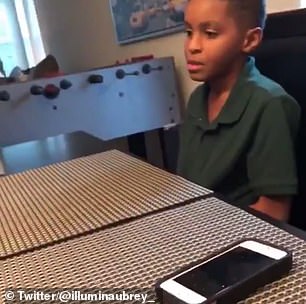 On Tuesday, Tamarion (top) and Jordan (bottom) were seated across from each other poised to hash out their differences, and by the end of it all, they had become fast friends

Along with the video that Delinzer first shared on Wednesday, he revealed what he learned when he took a ride with Tamarion and listened to what he had to say.

‘I decided to spend some time with my son’s school bully yesterday .. just to dig a little deeper on “why?” .. come to find out he was being bullied for not having clean clothes n clean shoes..,’ Delinzer wrote on Facebook. 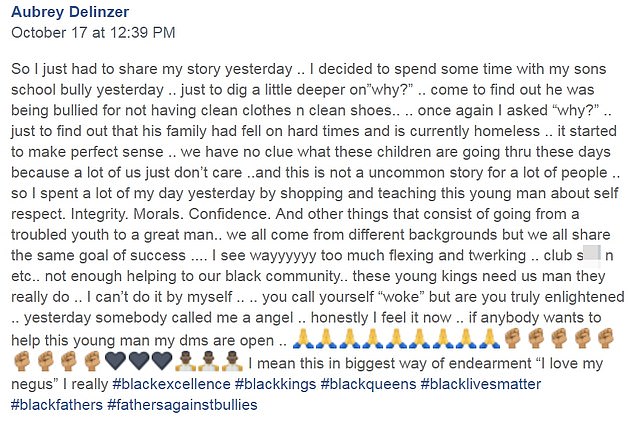 Along with the video that Delinzer first shared on Wednesday, he revealed that he learned that Tamarion was homeless, and was being bullied, himself, which led to him picking on Jordan

‘Once again I asked “why?” .. just to find out that his family had fell on hard times and is currently homeless .. it started to make perfect sense ..,’ he wrote.

‘We have no clue what these children are going thru these days because a lot of us just don’t care ..and this is not an uncommon story for a lot of people .. so I spent a lot of my day yesterday by shopping and teaching this young man about self respect. Integrity. Morals. Confidence. And other things that consist of going from a troubled youth to a great man.. we all come from different backgrounds but we all share the same goal of success …. I see wayyyyyy too much flexing and twerking .. club s**t n etc.. not enough helping our black community.. these young kings need us man they really do .. I can’t do it by myself .. .. you call yourself “woke” but are you truly enlightened .. yesterday somebody called me an angel .. honestly I feel it now .. if anybody wants to help this young man my dms are open …’

He added another line to say, ‘I mean this in biggest way of endearment “I love my negus” I really do #blackexcellence #blackkings #blackqueens #blacklivesmatter#blackfathers #fathersagainstbullies.’ 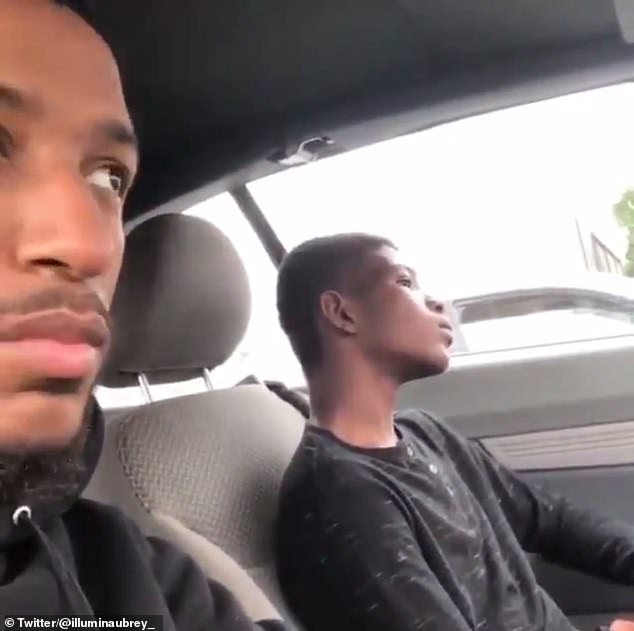 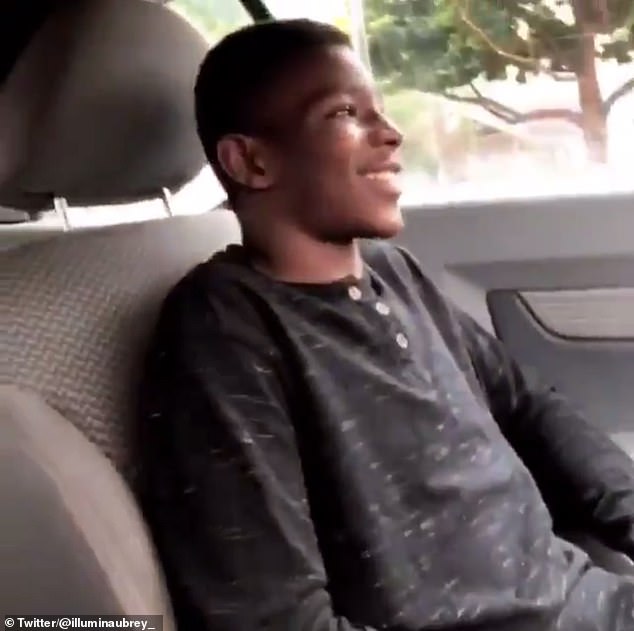 After a moment, Tamarion quickly loosens up with a big smile on his face, listening to music

The video shows Delinzer in a car, at first with a reluctant-looking Tamarion. Delinzer asks him, ‘What are you thinking about?’ as the child stares out the window, and replies, ‘Nothing.’

But after a moment, Tamarion quickly loosens up with a big smile on his face, listening to music and laughing with Delinzer. 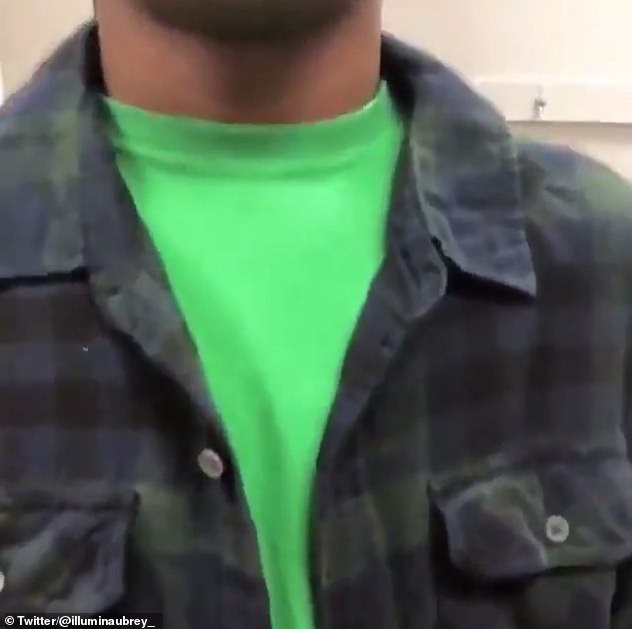 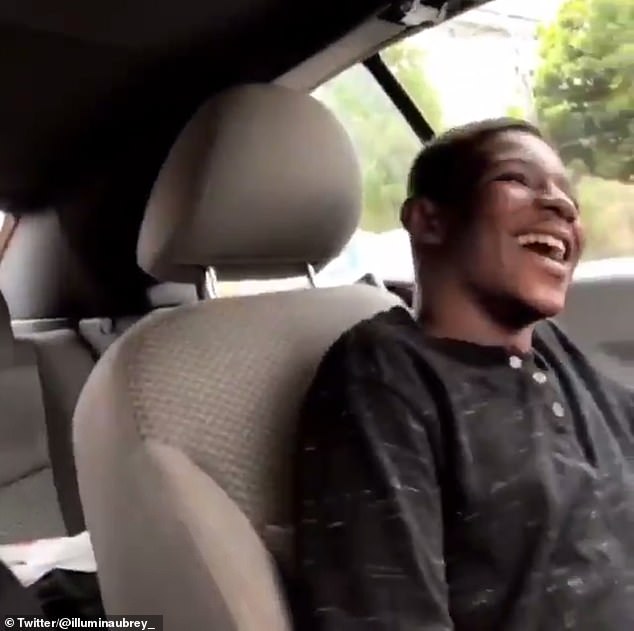 Back in the car, the two are all smiles with the radio blasting, as Delinzer yells, ‘Sing!’ 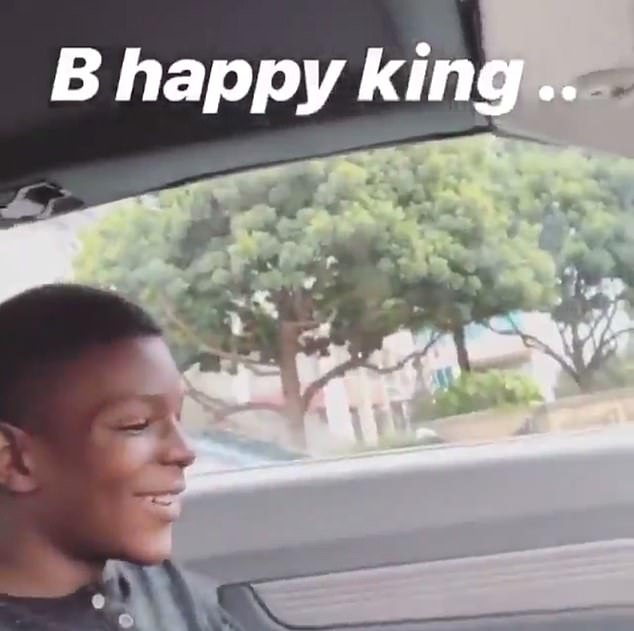 Back in the car, the two are all smiles with the radio blasting, as Delinzer yells, ‘Sing!’ and Tamarion laughs, shouting back ‘I can’t sing!’ through a toothy grin, before another clip focuses on the boy with Delinzer showing off his new clothes.

The shopping trip took place on Tuesday, and the very next day, the boys were sharing a video game controller at Delinzer’s tattoo shop off of Westheimer Road. 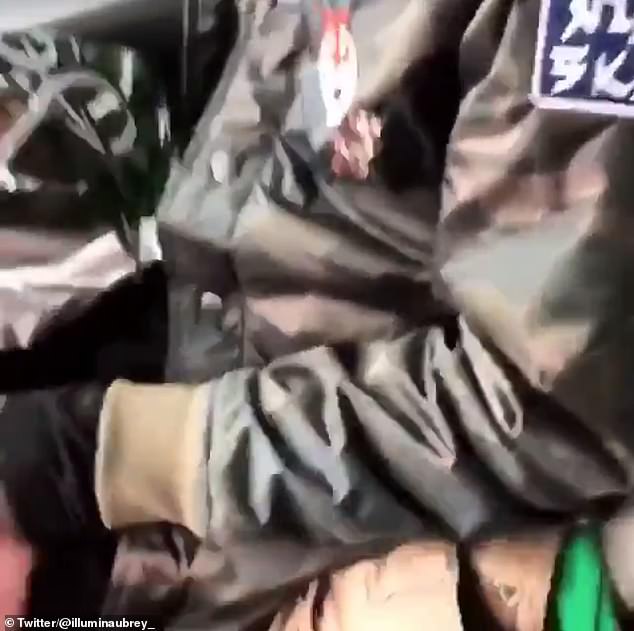 ‘This is today .. .. potnas .. n now I’m a first time mentor [man shrugging emoji, praying hands emoji],’ he tweeted on Wednesday, with a photo of the two boys standing behind a parked car, with big smiles on their faces.

Delinzer reflected on how his son’s newfound friendship made him feel, and the advice he would give to other parents who find their families in similar situations.

‘That’s not my only child, so I went through a lot being a father and it means a lot to me to see that,’ he said.

His best advice for others is to simply listen, whenever possible. It can be that simple, he said, as long as you commit to keeping an open mind. The shopping trip took place on Tuesday, and the very next day, the boys were sharing a video game controller in Delinzer’s tattoo shop off of Westheimer Road (pictured)