Third Kavanaugh Accuser Says the Supreme Court Nominee Was There When She Was Drugged and Gang-Raped at a High School Party, and Claims She Saw Him ‘Lined Up’ to ‘Take His Turn’ with Drunk Girls – but Nominee Says Allegation Is ‘From the Twilight Zone’

Brett Kavanaugh was dramatically accused Wednesday of drugging a high school girl and taking part in a gang rape.

Julie Swetnick, his new accuser, released a sworn statement through her attorney Michael Avenatti saying that Kavanaugh and his friend Mark Judge were there as she was abused by a ‘train’ of teenage boys.

She said she was drugged ‘using Quaaludes or something similar’ which had been put in her drink – and that Kavanaugh and his friends would spike ‘punch’ at parties with grain alcohol or drugs to ’cause girls to lose inhibitions and their ability to say ‘No’.’

Swetnick, who says she has worked for the State Department and other government agencies including Homeland Security, accused Kavanaugh of being part of a group of boys abusing her.

‘In approximately 1982, I became the victim of one of those ‘gang’ or ‘train’ rapes where Mark Judge and Brett Kavanaugh were present,’ she said in the statement.

‘During the incident, I was incapacitated without my consent and unable to fight off the boys raping me.’

Judge is the other student Christine Blasey Ford says was present when Kavanaugh jumped on top of her and tried to remove her clothes.

The testimony is a fresh blow to Kavanaugh, already accused of two sexual assaults by named women – Christine Blasey Ford, who claims Kavanaugh groped her and covered her mouth at a high school party, and Debbie Ramirez, who claims he exposed himself to her at a Yale dorm party. Kavanaugh denies the charges by all three women.

Her statement was delivered by Avenatti 24 hours before a dramatic day of testimony Thursday at which first Ford and then the nominee will be questioned by a prosecutor hired by the all-male Senate Judiciary Committee Republicans.

He tweeted that her testimony showed why there had to be an FBI investigation. 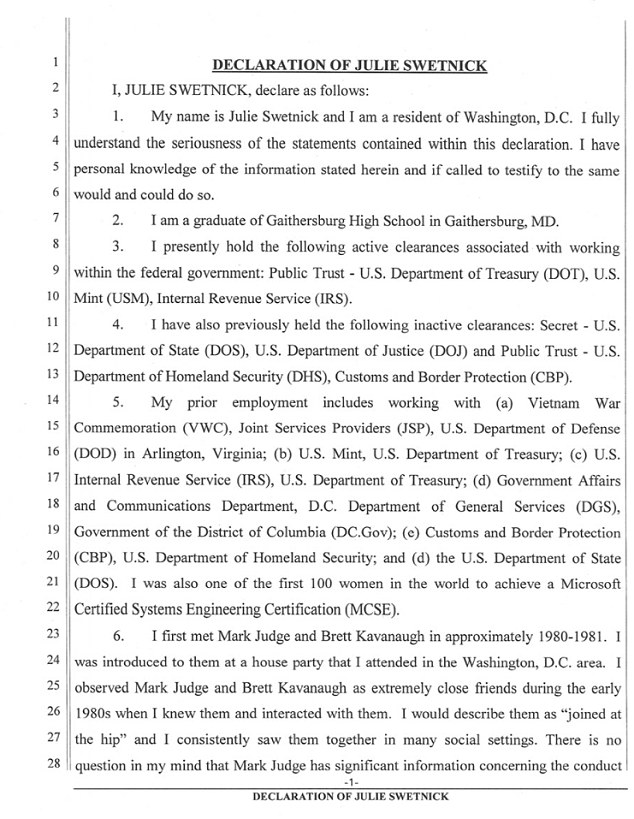 Testimony: This is the first page of the three-page sworn statement made by Julie Swetnick accusing Brett Kavanaugh of gang rape

Kavanaugh denied the new bombshell charges. ‘This is ridiculous and from the Twilight Zone,’ he said in a statement released by the White House. ‘I don’t know who this is and this never happened,’ he said.

President Trump immediately entered the fray to defend his on-the-ropes nominee, attacking Avenatti on Twitter as a ‘total low-life!’

‘Avenatti is a third rate lawyer who is good at making false accusations, like he did on me and like he is now doing on Judge Brett Kavanaugh. He is just looking for attention and doesn’t want people to look at his past record and relationships – a total low-life!’ Trump wrote.

Swetnick says she was a student at Gaithersburg High School, in Gaithersburg, Maryland, which is close to Chevy Chase, where Kavanaugh attended the elite Catholic Georgetown Preparatory School.

The community is located outside the city’s beltway and about 15 miles away, and is home to many commuters who work in the District. Hers was a public high school.

In three pages of evidence she says that she met him at a Washington D.C. house party in 1980 or 1981 and that Kavanaugh and Judge were ‘joined at the hip’.

‘There is no question in my mind that Mark Judge has significant information concerning the conduct of Brett Kavanaugh during the 1980s, especially as it relates to his actions towards women,’ she said.

Swetnick, 55, makes detailed claims about Kavanaugh’s conduct at ‘well over ten house parties’ between 1981 and 1983.

‘On numerous occasions at these parties, I witnessed Mark Judge and Brett Kavanaugh drink excessively and engage in highly inappropriate conduct, including being overly aggressive with girls, and not taking ‘No’ for an answer,’ she wrote.

‘This conduct included the fondling and grabbing of girls without their consent.’

Swetnick alleges that Kavanaugh was a ‘mean drunk’ and she saw him ‘engage in abusive and physically aggressive behavior toward girls’.

That included ‘pressing girls against him without their consent, ‘grinding’ against girls, and attempting to remove or shift girls’ clothing to expose private body parts.’

He would make ‘crude sexual comments’ towards girls which she said were ‘designed to demean, humiliate and embarrass them’, Swetnick charged.

Swetnick says that she saw such conduct at a ‘Beach Week’ in Ocean City, Maryland – an event which Kavanaugh’s calendars, which the Senate Judiciary Committee released Wednesday, show he attended.

Swetnick said she wanted to challenge Kavanaugh’s version of his high school years which he put forward in a Fox News interview Monday as ‘absolutely false and a lie’.

‘I witnessed Brett Kavanaugh consistently engage in excessive drinking and inappropriate contact of a sexual nature with women during the early 1980s,’ she alleges.

Swetnick says that she became aware of attempts by Kavanaugh, Judge, and other friends, to spike drinks at parties in 1981 and 1982.

She says she would ‘purposely avoid the ‘punch” but says she saw Kavanaugh and Judge ‘target’ girls to take advantage of them.

‘It was usually a girl that was especially vulnerable because she was alone at the party or shy,’ Swetnick alleges.

She said that boys would get a girl ‘inebriated and disoriented so they could then be ‘gang raped’ in a side room or bedroom by a ‘train’ of numerous boys.’

‘I have a firm recollection of seeing boys lined up outside rooms at many of these parties waiting for their ‘turn’ with a girl inside the room.

‘These boys included Mark Judge and Brett Kavanaugh,’ she said.

Avenatti has pushed for several days to have the Judiciary panel hear testimony from Judge, who Ford claims was present during the alleged sexual assault she says happened in high school. The committee’s GOP majority has refused to do so, and has only called Kavanaugh and Ford to testify. 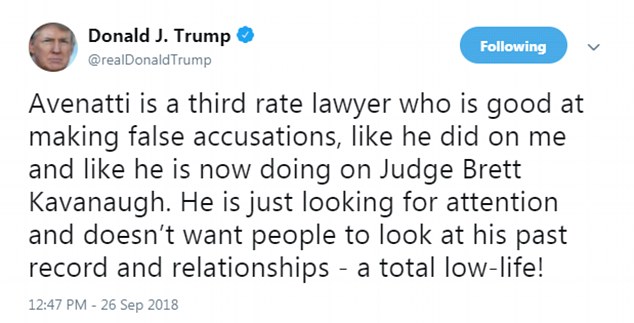 The attorney representing Ramirez, who says she is willing to testify and submit to an FBI investigation, said he had not heard from the committee.

Swetnick’s testimony alleges: ‘In approximately 1982, I became the victim of one of those ‘gang’ or ‘train’ rapes where Mark Judge and Brett Kavanaugh were present.

‘During the incident, I was incapacitated without my consent and unable to fight off the boys raping me.

‘I believe I was drugged using Quaaludes or something similar placed in what I was drinking.’

Crucially, Swetnick says she confided in ‘at least two other people’ about what had happened and also says: ‘I am aware of other witnesses that can attest to the truthfulness of each of the statements above.’

As Avenatti had tweeted in advance, his client has extensive experience working for the federal and local governments – including at agencies that President Trump has hailed repeatedly like Customs and Border Protection.

According to her statement, she holds active security clearances for work at the Treasury Department, the U.S. Mint, and the Internal Revenue Service.

She stated that she previously has held clearances for the State Department, the Justice Department, and the Department of Homeland Security and Customs and Border Protection.

Her resume includes working at the Defense Department, the Mint, the Treasury Department, the IRS, CBP, Homeland Security, State, the D.C. government, and other agencies.

Describing the area party scene at that time, she wrote: ‘These parties were a common occurrence in the area and occurred nearly every weekend during the school year. On numerous occasions at these parties, I witnessed Mark Judge and Brett Kavanaugh drink excessively and engage in highly inappropriate conduct, including being overly aggressive with girls and not taking ‘No’ for an answer. This conduct included the fondling and grabbing of girls without their consent,’ she wrote.

The testimony presents a dramatically different picture of Kavanaugh’s youth to the one he advanced in the Fox News interview Monday in which he sat with his wife and spoke about going to church, working on social projects and doing homework.

Swetnick drove that point home in her own statement. ‘I have reviewed Brett Kavanaugh’s recent claim on Fox News regarding his alleged ‘innocence’ during his high school years and lack of sexual activity,’ she wrote.

‘This claim is absolutely false and a lie. I witnessed Brett Kavanaugh consistently engage in excessive drinking and inappropriate contact of a sexual nature with women during the early 1980s,’ she wrote.

The flood of new accusations – on top of the allegations by two previously named female accusers – comes as President Trump said Republicans should have jammed the nomination through before the information came out.

‘They could have pushed it through two weeks ago and we wouldn’t be talking about this right now, which is what I would have preferred,’ the president said as he entered the United Nations Wednesday.

That time frame would have put Kavanaugh on the Supreme Court before the allegations against him came to light.

Trump called Kavanaugh an ‘absolute gem’ Wednesday and trained new fire on Democrats, saying they were operating ‘very unfairly’ and charged they were running a ‘con game.’

Of Kavanaugh, who released his high school 1982 calendar on Wednesday, Trump said: ‘He’s a gem. He’s an absolute gem. And he’s been treated very unfairly by the Democrats who have been playing a con game.’

‘Republicans need to immediately suspend the proceedings related to Judge Kavanaugh’s nomination, and the president must order the FBI to reopen the background check investigation,’ Schumer said in a statement.

All 10 Senate Judiciary Committee Democrats signed a letter to Trump asking him to withdraw Kavanaugh’s nomination.

Sen. Jeff Flake of Arizona announced he would speak about Thursday’s hearing on the Senate floor. He is among the Republicans who could doom the nomination if he decides not to support Kavanaugh.

‘There are now multiple, corroborated allegations against Judge Kavanaugh, made under the penalty of perjury, all of which deserve a thorough investigation,’ he said.

On Wednesday, Kavanaugh produced a 1982 calendar containing entries for parties, football games, and a plan to see ‘Rocky III’ – but does not appear to contain information about a party where a woman claims he assaulted her.

Kavanaugh’s calendar, from Northwestern Mutual Audobon Society and running from May through August, contains some scribbles and details of the social life of the Circuit Court Judge and Supreme Court nominee.

He produced it in advance of a blockbuster hearing as evidence that he did not sexually assault Christine Blasey Ford at a high school house party as she has claimed and will testify Thursday.

A May 1 entry says ‘Go to Holy Child Party,’ a reference to a Catholic school in Potomac, Maryland. It says Kavanaugh will drive.