Again people, when you are accused of something, please admit that you are a sinner and that you are capable of doing evil things, but what I am accused of I did not do. Saying stupid things like I was a virgin and I am not capable of doing such acts and saying how good and kind you are is asinine and makes you sound and look like you’re lying – I, Luke Jeremiah, would personally like to see Kavanaugh become Supreme Court justice, but he is not Jesus.

As Brett and Ashley Kavanaugh sat for an interview on Fox News to address the sexual assault allegations against the Supreme Court nominee, the world watched, and judged, his wife as she appeared alongside him.

Social media was ablaze Monday night after the dramatic TV interview aired where Brett Kavanaugh flat out denied sexual assault claims and his wife vouched for his character and ‘heart’.

While some social media users supported Ashley as a mother and wife under scrutiny, others were keeping a close eye on her body language.

‘Ashley Kavanaugh was so clearly uncomfortable during that interview,’ journalist Jessica Mason Pieklo wrote on Twitter. ‘But also she knows exactly who she married’.

Others offered their support of Ashley, who spoke on the difficulties of explaining to their two young daughters the horrific claims against their father.

‘What I know is the truth, and the truth is I’ve never sexually assaulted anyone,’ Kavanaugh told Fox News’ Martha MacCallum.

His wife said she never believed the accusations that have imperiled the nomination of her husband, an accomplished judge on the D.C. Circuit Court of Appeals Court, to reach the Supreme Court.

‘No. I know Brett I’ve known him for 17 years. And this is not at all character … It’s really hard to believe. He’s decent. He’s kind. He’s good. I know his heart. This is not consistent with Brett,’ Ashley Kavanaugh said.

People on Twitter jumped to analyze Ashley’s body language as she defended her husband’s character.

‘If I’m a juror and I watch Ashley Kavanaugh’s interview, I’d think, her husband is guilty,’ one woman wrote. ‘She doesn’t seem too convincing at all.’

‘Nothing about Martha MacCallum’s interview with Brett Kavanaugh and his wife Ashley looks authentic. Nothing,’ Lawyer and writer Amee Vanderpool wrote on Twitter. 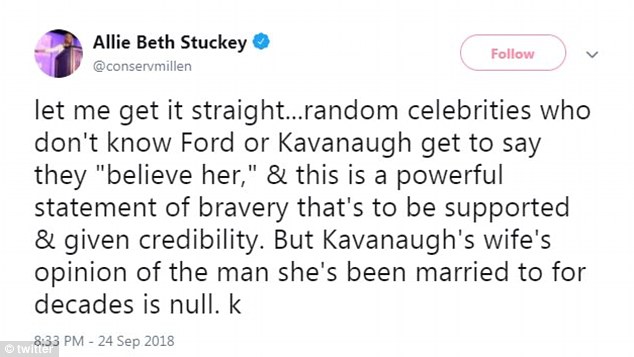 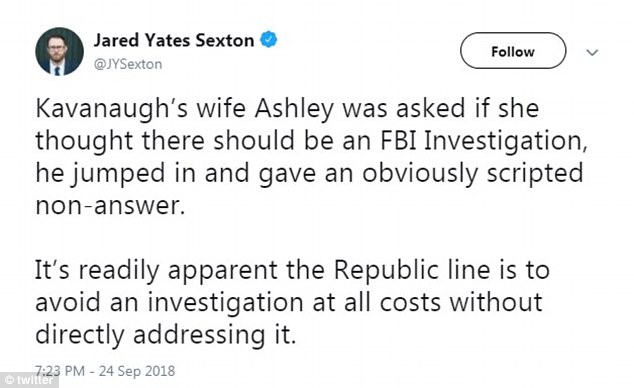 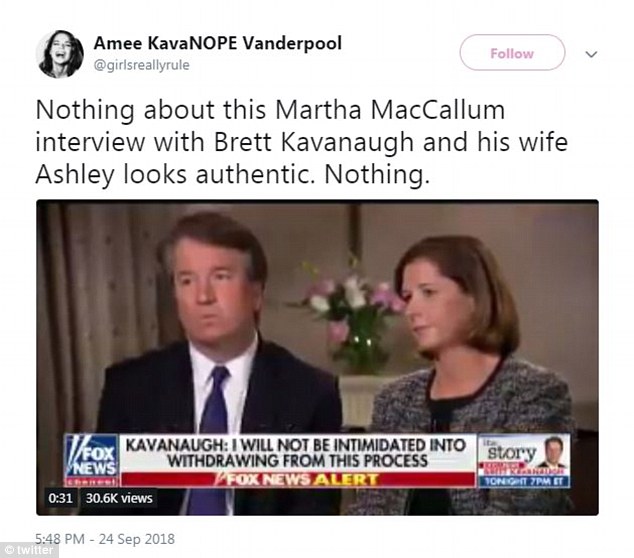 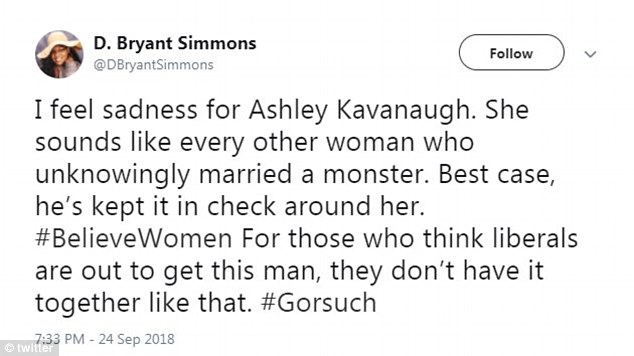 Others pointed out his wife’s silence when asked if she thought there should be an FBI investigation.

‘[Brett Kavanaugh] jumped in and gave an obviously scripted non-answer,’ author Jared Yates Sexton wrote. ‘It’s readily apparent the Republic line is to avoid an investigation at all costs without directly addressing it.

Some sympathized with Ashley Kavanaugh.

Political consultant Matthew Dowd wrote: ‘I also have tremendous compassion for judge Kavanaugh’s wife Ashely, who I know and who is a great person, and for his daughters. Hard on all these women.’