University of Maryland Is Found Responsible In 19-Year-Old Lineman’s Death After Staff Failed to Identify His Heatstroke Symptoms and Waited Almost Two Hours to Get Him to a Hospital Before He Died, Investigation Finds

An independent investigation into the death of University of Maryland football player Jordan McNair has determined that trainers on the scene did not follow proper procedures after he collapsed on the field.

The report released on Friday provided details of what happened and confirmed what university officials previously acknowledged.

McNair was hospitalized on May 29 after a team workout and died June 13. The family attorney said the cause of death was heatstroke.

Dr. Rod Walters, a former college athletic trainer and sports medicine consultant who led the investigation launched by the school following McNair’s death, said Friday that it was 1 hour, 39 minutes between the time McNair collapsed and the departure of the ambulance from the campus.

‘There was the failure to identify escalating symptoms associated with heat illness, including assessing vital signs, identifying the condition and aggressively treating the patient’s elevated core temperature,’ Walters said.

‘No apparatus was used for prompt cooling of the patient. Inadequate cooling devices were used, such as cold towels, ice packs, etc.’

Maryland athletic director Damon Evans acknowledged last month that ‘mistakes were made’ by the training staff in the treatment of McNair, a 19-year-old sophomore offensive lineman. University President Wallace Loh visited McNair’s parents to offer a personal apology for how the situation was handled.

Terrapins head coach DJ Durkin, who was not at the press conference, is on administrative leave while an unrelated external investigation into the culture of the football program is being conducted.

According to the report, Durkin was on the scene when McNair collapsed. His role in the events that followed was not made clear. 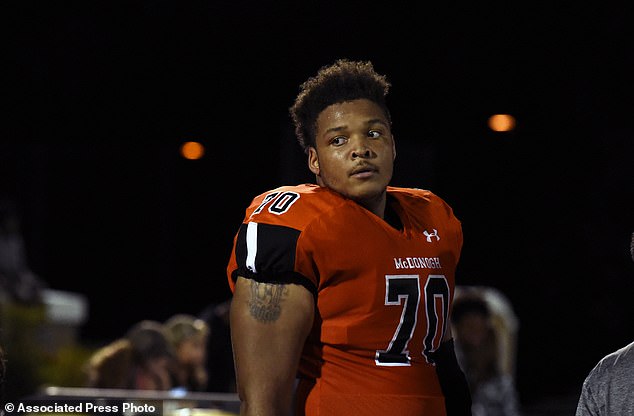 McNair is seen on the sidelines during a high school game in 2016. An independent investigation into his death determined that U of M trainers did not follow proper procedures

Much of Walters’ report focused on recommendations that would prevent a tragedy like this from happening again.

Loh met with the media after Walters presented his findings.

‘We have protocols and policies which are good, but it is not enough that they are good,’ the university president said. ‘They have to be implemented and there has to be training. That is where we’re short and we have to do a better job.’

In a release issued before the news conference began, the university wrote: ‘We made immediate changes following Jordan’s death and have continued to make enhancements informed by the preliminary observations of the external review (by Walters) we received this summer.’

The list of changes already implemented, according to the school, include an increase in doctors and training at practices and games; additional on-site cooling stations to football training camp and practices consisting of portable spray misters, recovery drinks and cooling towels; and increasing the number and length of recovery breaks.

Loh was very candid last month when talking about the school’s role in McNair’s death.

‘They entrusted their son to us, and he did not return home,’ Loh said of McNair’s parents. ‘The University accepts legal and moral responsibility for the mistakes that were made on that fateful day. … They misdiagnosed the situation.’

On that day, the law firm of Murphy, Falcon & Murphy, which represents the McNair family, wrote in a statement: ‘While Marty and Tonya will never get another day with Jordan, Dr. Loh’s words were meaningful to them and give them some comfort that he will put the University on the path to change the culture of the program so that no Terrapin family will have to endure the heartache and grief that they feel.’

Request for comment from the law firm on Friday was not immediately answered.

In the wake of McNair’s death, an ESPN story reported that the coaching staff engaged in physical and mental abuse of the players. 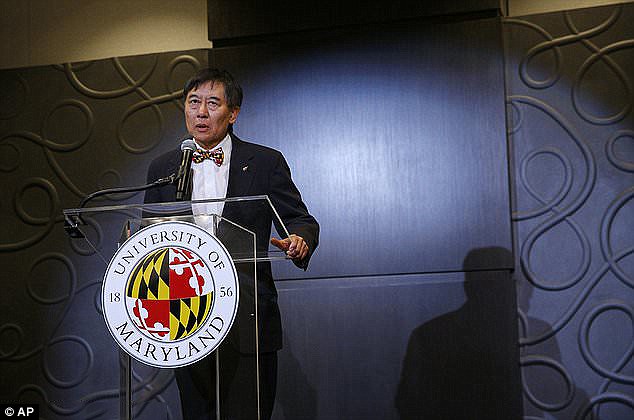 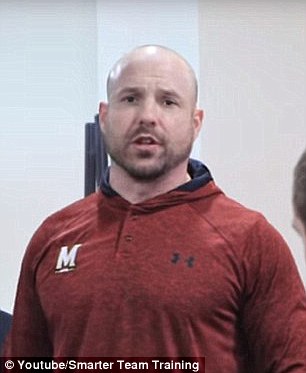 Loh distinguished between training staff and coaching staff last month when he spoke about mistakes that led to McNair’s death, but added the reports of ‘bullying behavior’ by football coaches ‘are totally inconsistent with what we stand for, and our values.’

An eight-member commission has been appointed to look into the culture of the football program.

That investigation is ongoing.

‘We will give that body the time and independence they need to get the facts,’ Board of Regents Chair James Brady said.

Offensive coordinator Matt Canada has been serving as interim coach. Maryland is 2-1 heading into Saturday’s Big Ten opener against Minnesota at home.