In a Chicago courtroom over the coming weeks, the spotlight will focus on one night in 2014, 16 gunshots, a white police officer, the death of a black teenager and an essential question: Murder or self-defense?

Chicago Police Officer Jason Van Dyke faces murder charges in the killing of 17-year-old Laquan McDonald, a shooting captured in a silent dashcam video that stirred outrage, upended politics and fueled the city’s racial tensions. While the jury trial that begins Monday revolves around the events of Oct. 20, 2014, it also draws fresh attention to the problems a troubled department has wrestled with for decades.

“It’s a new chapter but the same theme — police racism, violence and a code of silence,” says G. Flint Taylor, a civil rights lawyer and frequent critic of the Chicago police.

The case has already rippled beyond the courtroom, spurring a 13-month U.S. Justice Department probe that resulted in a blistering 2017 report in the final days of the Obama administration. It described a poorly trained police department with a “pervasive cover-up culture” that tolerated racial discrimination and used force almost 10 times more often against black suspects than whites.

Craig Futterman, a University of Chicago law professor, says these problems aren’t unique among big city police forces, but they are extreme.

Police Superintendent Eddie Johnson acknowledges mistakes have been made, especially in black and Latino neighborhoods, many of them beset by gangs and gun violence that have tormented parts of Chicago in recent years.

“There’s been a history in Chicago of the police department treating those particular communities inappropriately. I know that we did,” Johnson said in a recent interview with The Associated Press. He ticked off the ways that has played out: a lack of respect, excessive force and “wrongly just having the attitude that young men in those neighborhoods were doing nefarious activities.”

Johnson says he has enacted major changes even before the police department faces a massive overhaul under a proposed federal consent decree filed this month in federal court. Among the steps already taken: expanding the use of Tasers, ensuring all patrol officers have body cameras by year’s end, simulation training, and making videos available of police-involved shootings within 60 days of when a complaint is filed.

Though the Van Dyke murder charge is extraordinary, police controversies have been an uncomfortable part of Chicago history. Some of the most notorious incidents happened long ago, but they haven’t been forgotten.

The department is inextricably linked with the brutal image of an August night a half-century ago, when police officers wielding billy clubs pummeled anti-war protesters during the 1968 Democratic National Convention. A report called it a “police riot.”

And the names of Fred Hampton and Mark Clark, two Illinois Black Panther Party leaders killed in a 1969 police raid, still resonate in the black community. Reports indicate the police fired up to 99 shots; the Panthers shot once.

More recently, there have been eyebrow-raising police scandals, the exoneration of death row inmates who said they’d been tortured into making false confessions, and misconduct settlements, verdicts and legal fees that have cost the city more than $700 million in the last 15 or so years. The city reached a $5 million settlement with the McDonald family without a lawsuit being filed.

“There’s no sense of urgency, no effort … that would look into what the cause of these cases is and take definitive measures to try to stop this onslaught,” says Lori Lightfoot, a former president of the Chicago police board and mayoral candidate. “It’s just dissipating taxpayer dollars. It’s undermining the legitimacy of the police department.”

Johnson says improved training is the best way to reduce these lawsuits by preventing officers from making bad decisions.

But the city faces many more potentially big-dollar cases. In July, 15 men filed separate lawsuits alleging a disgraced former sergeant had framed them. All but one had their drug convictions vacated last year in a mass exoneration; the other had a gun conviction dropped later. And about 20 convictions involving an ex-detective also accused of framing suspects have been tossed. In June, a federal jury awarded more than $17 million to one man who served 21 years for murder before a witness recanted testimony that was allegedly coerced by the officer. 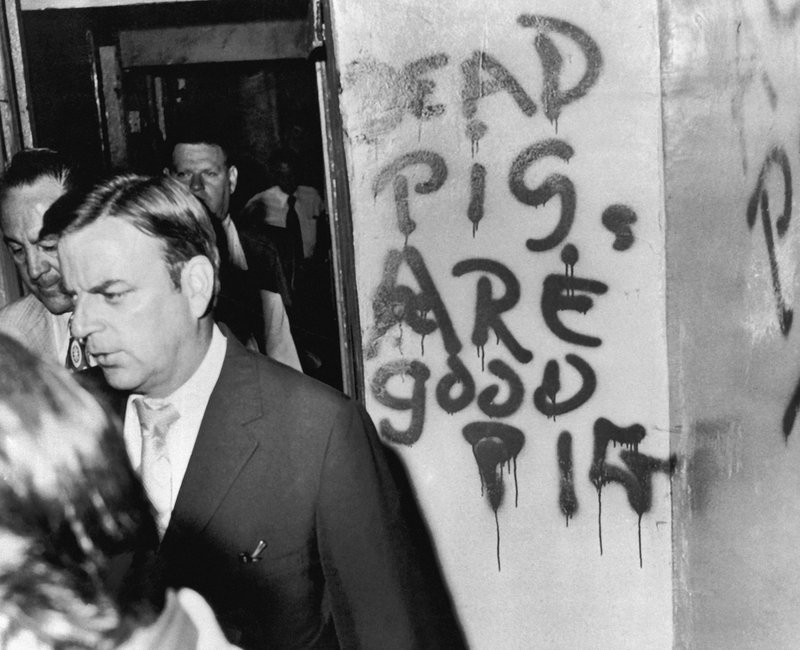 The State’s Attorney Edward V. Hanrahan walks past graffiti on wall of a West Side apartment in Chicago. (AP Photo)

No case is more infamous than that of former Commander Jon Burge, who led a “midnight crew” of rogue detectives accused of torturing more than 100 suspects, mostly black men, from 1972 to 1991, shocking them with cattle prods, smothering them with typewriter covers and shoving guns in their mouths to secure confessions. Burge was fired in 1993 and sentenced to prison in 2011 for lying in a civil case. It was too late to charge him criminally.

“People get mad (and say), ’We don’t want Chicago known for Al Capone,” says the Rev. Michael Pfleger, an activist priest. “But Al Capone was a gangster on the streets. Jon Burge was a higher-up in the Chicago Police Department. …. That’s much more dangerous to me.”

In 2015, the city agreed to pay $5.5 million in reparations to 57 Burge victims. Taylor, the lawyer for some of the men, estimates the price tag for all Burge-related cases is about $132 million.

In the last 10 years, 52 officers in a force of 13,000 have been fired for on-the-job misconduct, five for excessive force, according to the department.

What lawyers say connects Burge and many other egregious misconduct cases is a code of silence that allowed abuses to continue for years, even decades.

Futterman, an expert on the Chicago police, calls it an “institutional commitment to denial” that kicks in each time an officer does something wrong.

“It’s not just simply staying silent in the face of abuse, but it’s lying,” he says. “It’s crafting an official narrative that denies this happened … that will be backed up and down (within the department).”

Kevin Graham, president of the Chicago police union, insists that’s a myth. “I know of no police officer who’s going to cover up for a crime another police officer does,” he says.

Van Dyke’s partner and two other officers face trial this fall on conspiracy and obstruction of justice charges. Prosecutors allege they lied to protect Van Dyke, filing reports that echoed his statement that McDonald was a danger. Two are no longer on the force; Van Dyke was suspended without pay.

Van Dyke contends he shot McDonald 16 times, fearing for his life as the teen swung a knife at him. The video — released 13 months later after a court order — shows McDonald holding a knife at the side of his body, about 15 feet away from Van Dyke, walking away from him and other officers who had responded to a report that McDonald was trying to break into vehicles. The teen had punctured the tire of a squad car.

After the video’s release, Mayor Rahm Emanuel fired the police superintendent, Garry McCarthy, who’s now running for mayor. Emanuel came under intense criticism for his handling of the case and recently announced he’s not seeking a third term, though aides say the shooting wasn’t a factor.

Jon Loevy, a lawyer whose firm has won at least $300 million in verdicts and settlements in police cases over 20 years, says policymakers haven’t paid enough attention to the damage caused by all these incidents. “Nobody has spent the political capital in the past to reinforce necessary changes,” he says. “It wasn’t high enough on anybody’s list to make the reforms they’re finally trying to make now.”

The McDonald shooting, he adds, has resonated so much because the video and officer statements reinforce long-held suspicions.

“The net result is there’s a trust deficit the police are going to have to work hard to repair, because I think everybody in Chicago aspires to have a better relationship between the department and the community,” he says. “But it’s a two-way street.”

Sharon Cohen, a Chicago-based national writer, can be reached at scohen@ap.org or on Twitter at @scohenAP.