Julie Chen has yet to speak publicly about her husband in the wake of his resignation as CEO at the CBS Corporation, but on Monday her silence spoke volumes.

The host and creator of the network’s popular daytime show The Talk was a no show for the season premiere, and did not say when she planned to return to the program in a statement.

‘I am taking a few days off from The Talk to be with my family. I will be back soon and will see you Thursday night on Big Brother,’ Chen said in a statement.

That move came just days after a CBS source told DailyMail.com that Chen pulled out of affiliate interviews to promote the new season of the show.

The show did not opt to have a guest host fill in for Chen on the season nine premiere, and it was Sharon Osbourne who was tasked with speaking about the controversy.

All the women weighed in on the news, with Sheryl Underwood at one point calling the allegations against Moonves ‘a blessing from God.’ 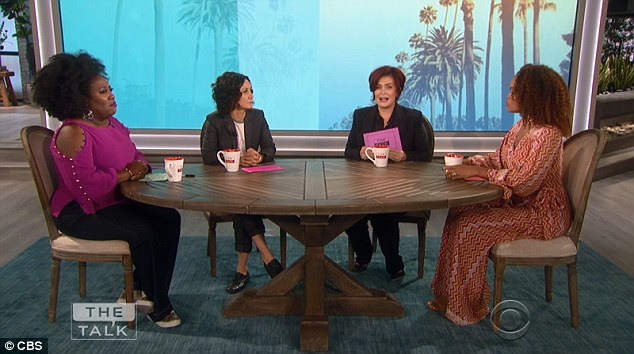 Same line-up: The show did not opt to have a guest host fill in for Chen on the season nine premiere (l to r: Sheryl Underwood, Sara Gilbert, Sharon Osbourne and Eve)

‘But I think this is a blessing from God to be unburdened from secrets and unchained from lies and that now is the time for everyone to look inside themselves and become better people and treat people the way they should be treated.’

She added: ‘And women should not feel that they have to carry secrets and burdens and lives destroyed.’

Osbourne began the discussion however by praising Chen, while also voicing her concern that The Talk may not survive in the wake of this move.

‘First of all, I want to say that whatever times I have had of hardship over the last eight years, Julie has always been there for me. She’s been a friend. She is somebody who I admire and respect greatly,’ said Osbourne, who appeared to be on the verge of tears.

‘And it’s very embarrassing and upsetting to have to talk about her husband, but we do. We feel it’s right.’

She continued: ‘I personally knew Les Moonves in a superficial way, nothing more. I know nothing about the man other than he was Julie’s husband and he was the head of the biggest network in the world. And the most powerful man in T.V.’

Osbourne then addressed a previous statement she made in July showing support for Moonves, which she soon backtracked on and deleted from her social media.

‘I was asked a couple of months ago to make a statement supporting Leslie which I felt I was as diplomatic as I could be with the statement that I made, but now after seven more women have come out, the stories are so similar, the pattern is so similar that for me, it’s – he’s not been convicted of any crime, but obviously the man has a problem,’ said Osbourne.

Her remarks then turned towards what the future might hold for her and the other hosts.

‘When a new regime comes into a company, we all know they sweep clean. Everybody here at CBS is nervous about their jobs,’ said Osbourne.

‘Yes, the ladies at this table will go on and we’ll probably find another show if our show, please God, it’s not taken off, we’ll always find another job and nobody is, you know, in that position yet.’

Sara Gilbert spoke next, and moved the focus of the conversation back to the women who have come forward with allegations.

‘I agree Julie is our friend. This is our ninth season and we’ve been together since the beginning. I love her. I support her always. You know,’ began Gilbert.

That line drew a vigorous round of applause from the audience.

‘You know, this is very serious and the appropriate actions need to take place. And so I am happy when women are heard because for a long time, they haven’t been,’ she went on to say.

Eve then echoed these thoughts, and said she looked forward to the moment when women did not have to deal with these behaviors in the workplace.