Brian Nixon: How Shall We Evangelize?

As I walk the beautiful Pecos National Historical Park (U.S National Park), I see things that are both stunning and sad.  The stunning things are the natural beauty of the area:  mountains, flowers, pine trees, and a large open field.  Nature is full of God’s grandeur in this region known as the Glorieta Pass.

Additionally, I see the ruins of a once beautiful church, red-earthed in tone; it sits handsomely against the blue sky with yellow flowers gracing the ground around it.  I also see the splendor of the once thriving city of Pecos, a Pueblo site that held roughly 2,000 Native inhabitants.

The region of Pecos National Historical Park is full of natural wonder and loveliness.  But while reading the plaques along the walk, I begin to unearth some of the sadness of the place.

It begins around 1540 AD.  Here, “Francisco Vasquez de Coronado led an expedition to establish a new colony for Spain while looking for the fabled Seven Cities of Gold–Cibola. Leading an army of 1,200 men, most of which were Aztecs, Coronado made his way into the country north of Mexico. Six months into the march the rode into a cluster of Zuni pueblos, Cibola, near present-day Gallup. He attacked the Zuni at Hawikuh, taking over that principal town and its food stores for his famished soldiers” [1].

Sadness came with the soldiers who attacked the Native inhabitants, killing many for the food the Natives held; the European surge was one of violence.  At another city named Acoma, soldiers cut the hands off of the people and tossed many off a 365-foot mesa [2]. 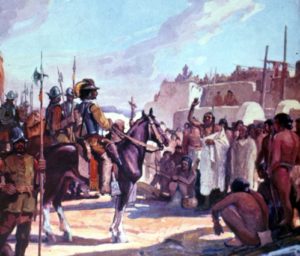 The story picks up in Pecos: “150 miles east, the Pecos people welcomed the Spaniards with music and gifts. A native at Pecos told of a rich land to the east, Quivira, and Coronado set out in spring 1541 to find it. Wandering as far as Kansas, he found only a few villages. His Indian guide confessed he lured the army on to the plains to die, and Coronado had him strangled. The expedition turned back to find a less hospitable Pecos Pueblo as they Pecos people were not happy with their return.”  More murder and mayhem.

The Europeans eventually left, only to return. “Nearly 60 years passed before Spaniards came to New Mexico to stay. New Spain’s frontier had slowly advanced with the discovery of silver in northern Mexico. In 1581, explorers began prospecting for silver in the land of the Pueblos. Their failures foreshadowed a truth that determined much of Spanish New Mexico’s history: that province held neither golden cities nor ready riches. But the fact that settlers could farm and herd there focused the joint strategies of Cross and Crown: Pueblo Indians could be converted, and their lands colonized” [ibid 1].

Reading this bit of history—of violence, forced conversion, and colonization—one has to pause and take note of how the first Native inhabitants were introduced to Christ, Love incarnate (even if in the shadow of a country).  The Europeans didn’t bring a love song of Christ: “Come to me, all you who are weary and burdened, and I will give you rest.” Rather, a tune of “Come to me you who have the blessings, I want to take it from you.”  Sadly, the proclamation of Christ was mixed up with the propagation of a country.

Incidences like this should cause convictional Christians to ask:  How are we to evangelize, particularly with people that have no knowledge of Jesus? We surely don’t want to intermix a particular culture’s needs with the spiritual needs of a people.  We don’t want to seek gold but proclaim God in Christ.

John Stott provides great insight into this topic.  In his book Christian Mission in the Modern World he proposes a partnership of evangelism and social action.  Put another way, we share and we care.