Senate Democrats worked into the night in a last, ferocious attempt to paint Supreme Court nominee Brett Kavanaugh as a foe of abortion rights and a likely defender of President Donald Trump. But after two marathon days in the witness chair in a Senate hearing room, Kavanaugh appeared to be on a path to confirmation as a Supreme Court justice.

The 53-year-old appellate judge stuck to a well-rehearsed script throughout his testimony, providing only glimpses of his judicial stances while avoiding any serious mistakes that might jeopardize his confirmation. In what almost seemed like a celebration Thursday, Kavanaugh’s two daughters returned to the Senate Judiciary Committee hearing room for the final hours of testimony, accompanied by teammates on Catholic school basketball teams their father has coached.

Senators will return for a final hearing day on Friday along with more than two dozen witnesses on both sides of the nomination fight. Democratic witnesses include John Dean, Richard Nixon’s White House counsel who cooperated with prosecutors during the Watergate investigation, and Rochelle Garza, the legal guardian for the pregnant immigrant teenager whose quest for an abortion Kavanaugh would have delayed last year. 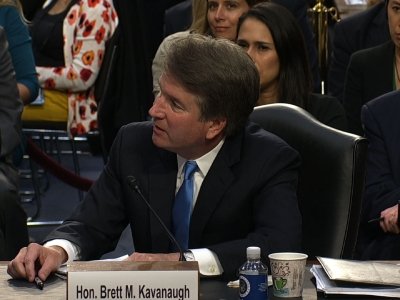 US Senator Kamala Harris on Sept. 6, 2018, questioned Kavanaugh about whether he had spoken with a particular law firm about special counsel Robert Mueller’s investigation. (AP video)

On the Republican side, former solicitors general Theodore Olson and Paul Clement will testify in support of the nominee, along with former students, law clerks and the mother of a basketball player Kavanaugh coached.

Campaigning in Montana Thursday night, Trump sought to elevate Kavanaugh’s confirmation as a political litmus test for voters, saying the judge deserves bipartisan support and criticizing the “anger and the meanness on the other side — it’s sick.”

Abortion was a focus throughout Kavanaugh’s two days of testimony. The Democrats’ best shot at stopping Kavanaugh — who could swing the court further to the right for decades — would be branding him as a justice who might vote to overturn the court’s landmark Roe v. Wade ruling. Their hope is that two Republican senators who support abortion rights could break from their party and vote against him.

A newly disclosed email suggested Kavanaugh once indicated the abortion case was not settled law, though Kavanaugh denied in the hearing that he had been expressing his personal views.

The tone in the email from 2003 contrasted with his responses to questions on Wednesday when he stressed how difficult it is to overturn precedents like Roe. In the email, Kavanaugh was reviewing a potential op-ed article in support of two judicial nominees while he was working at the George W. Bush White House. The document had been held by the committee as confidential, but was made public Thursday.

“I am not sure that all legal scholars refer to Roe as the settled law of the land at the Supreme Court level since Court can always overrule its precedent, and three current Justices on the Court would do so,” Kavanaugh wrote, referring to justices at the time, in an email to a Republican Senate aide. The document was partially redacted.

Asked about it by the committee’s top Democrat, Dianne Feinstein of California, Kavanaugh reiterated his previous testimony that “Roe v. Wade is an important precedent of the Supreme Court.”

Democrats also questioned Kavanaugh’s ability to separate himself from Trump and special counsel Robert Mueller’s investigation of Russia’s meddling in the 2016 election. Throughout his testimony, Kavanaugh repeatedly stated the importance of judicial independence.

Democratic Sen. Dick Durbin of Illinois put the focus on Trump, who Durbin said, “has shown contempt for the federal judiciary and has shown disrespect for the rule of law over and over again.”

“It’s in the context of the Trump presidency that we ask you these questions,” Durbin said.

Kavanaugh refused to answer questions about Trump or commit to stepping aside from any case about the Russia investigation that might come to the Supreme Court. When Sen. Richard Blumenthal of Connecticut invited him to denounce Trump’s criticism of federal judges, including Justice Ruth Bader Ginsburg, the nominee demurred.

“The way we stand up is by deciding cases and controversies independently without fear or favor,” Kavanaugh said.

Earlier, he said his 12-year record as an appellate judge shows that he has not been afraid to invalidate executive branch actions. Kavanaugh said that he has made clear that a court order “that requires a president to do something or prohibits a president from doing something … is the final word in our system.” 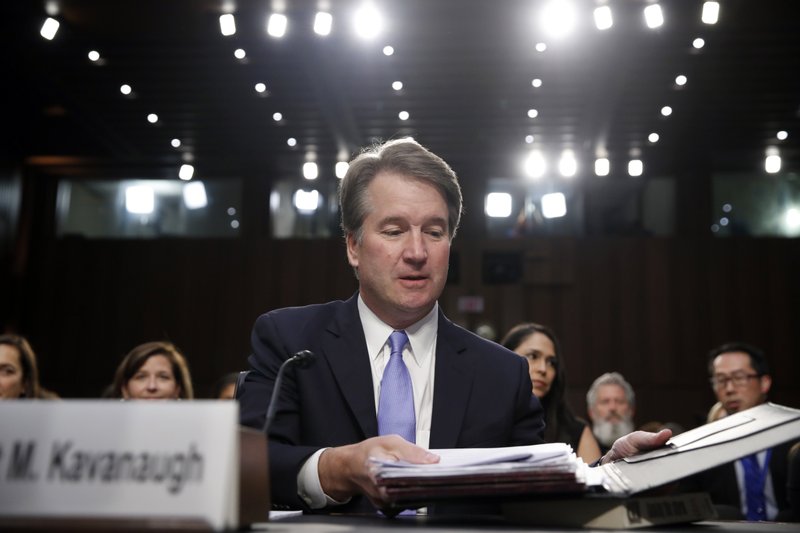 Kavanaugh readies his papers before he testifies in Washington on Sept. 6, 2018. (AP Photo/Alex Brandon)

On a separate track, Sen. Patrick Leahy of Vermont and Durbin led the charge in suggesting that Kavanaugh misled them in earlier testimony. He denied that allegation with the robust support of Senate Republicans.

Much of the debate among senators focused more on the disclosure of documents than on Kavanaugh’s record. Democratic Sen. Cory Booker of New Jersey — who along with Harris is a potential presidential candidate in 2020 — said he was willing to risk fallout over releasing confidential documents about Kavanaugh’s views on race. Republican John Cornyn of Texas warned him that senators could be expelled for violating confidentially rules. Democrats and Booker responded, “Bring it on.”

In fact, some of the documents the Democrats wanted disclosed had been released hours earlier, in a pre-dawn disclosure approved by Bill Burck, the GOP attorney who serves as presidential records lawyer for Bush.

The document battle stemmed from Kavanaugh’s unusually long paper trail following his years in the Bush White House. The panel’s process resulted in hundreds of thousands of pages of Kavanaugh’s documents being withheld as confidential or kept from release under presidential privilege by the Trump White House. 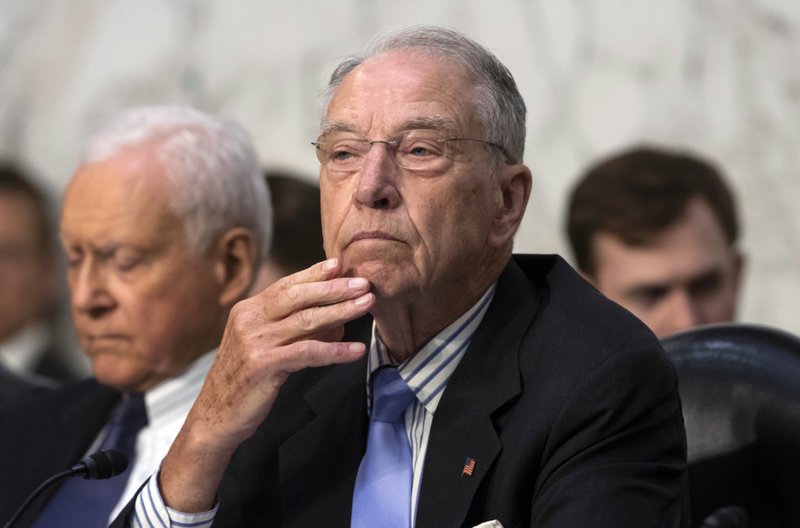 After more than an hour of delay over procedural questions, Senate Judiciary Committee Chairman Chuck Grassley, R-Iowa, with Sen. Orrin Hatch, R-Utah, left, listens to panel members as Kavanaugh waits to testify on the third day of his confirmation hearing, on Capitol Hill in Washington, Sept. 6, 2018. (AP Photo/J. Scott Applewhite)

“My process was fair,” Grassley declared.

Republicans hope to confirm Kavanaugh in time for the first day of the new Supreme Court term, Oct. 1.

Read more on AP’s coverage of Kavanaugh at https://apnews.com/tag/Kavanaughnomination