Even two decades after he fled North Korea, even with an abiding hatred of the ruling dictatorship, Sim Ju-il sometimes still relives the days when he goose-stepped past the nation’s revered founder, Kim Il Sung, as a young man. Alone on a Seoul street, he’ll pretend his umbrella is a rifle and present arms as he lifts his now aged legs in a rigid, still springy march and remembers the long-ago, exalted feeling.

“I was proud of myself because not too many people got to take part in these marches, and I still have that pride,” said Sim, 67, who participated in military parades in 1972 and 1985 — first as a goose-stepper and later riding on a military vehicle — before later defecting to South Korea. “I think North Korean military parades are the best in the world.”

Ahead of a massive military parade Sunday to mark the 70th anniversary of the founding of North Korea’s socialist government, there are mixed feelings among ex-North Korean soldiers who goose-stepped in previous years’ parades. Pride, for some like Sim, but bitterness among others who say they were beaten, battered and malnourished during intense training sessions that never seemed to end. There’s also acknowledgement that the privilege of marching in one of the North’s premier events guaranteed speedy promotion and higher social standing.

Another former North Korean goose-stepper, Kim Jungah, was once proud of her marching but now feels she was physically abused. Still, she, too, sometimes dusts off her goose-stepping skills for South Koreans curious about the harsh training she experienced ahead of a 1997 military parade in North Korea.

The sight of thousands of goose-stepping soldiers can be a breathtaking spectacle: Columns of young soldiers, some with bayonet-tipped rifles, kick their unbending legs high in perfect unison as they parade through Pyongyang’s main Kim Il Sung square. Metal tips and heel plates on their boots ring out in unison, and the troops often look more like they’re bouncing than marching as they spring forward. When they reach an elevated reviewing stand where North Korea’s young ruler, Kim Jong Un, smiles and waves his hands, they all instantly whip their heads at a 45-degree angle at the command, “Eyes right!” The current batch of North Korean goose-steppers appears to swing their feet much higher than their predecessors. 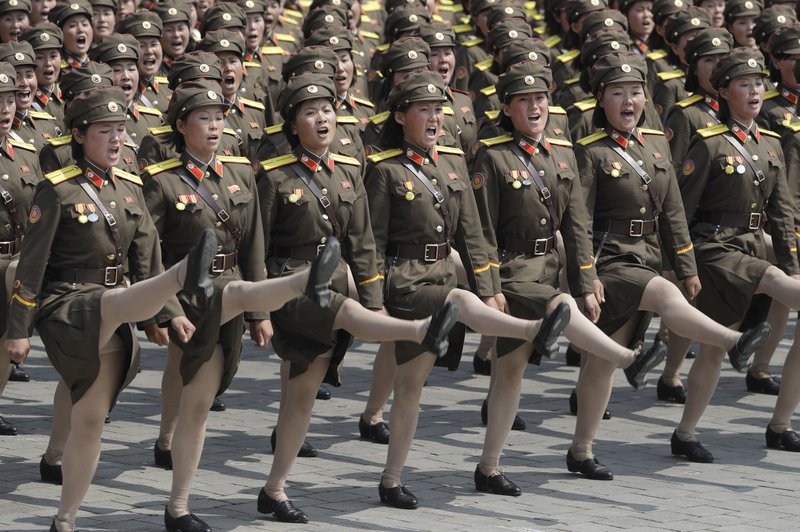 Former North Korean soldiers who goose-stepped in its massive military parades say their training was harsh but participating was a huge privilege that raised their social standing.

Goose-stepping was once favored by despots like Hitler, Mussolini, Mao and Stalin, but North Korea is now one of the few nations whose military still does a full-fledged version. Experts say the spectacle allows Kim to display to the world highly disciplined, devoted and powerful troops as he maneuvers in a decades-long nuclear standoff with the United States and South Korea.

The goose-steppers are mostly from military academies or elite army units, selected because of their loyalty to the Kim government, family background and height.

Sim was a member of Kim Il Sung University of Politics, a prestigious army academy, in 1972, when he marched. His school only selected those who were between 165 and 174 centimeters (5′4″ and 5′7″ feet) tall. Kim Jungah, who eventually dropped out of the parade because of injuries, said her academy only selected female cadets who were 160-164 centimeters (5′2″- 5′3″).

“When you are in a parade, you’re in the presence of Kim Jong Un, so there are elaborate background checks that must be done before you can attend such events,” said analyst Seo Yu-Seok at the Seoul-based Institute of North Korean Studies. “Being in a parade is the same thing as the top leader bestowing on you his pomp and splendor, so it helps your future.” 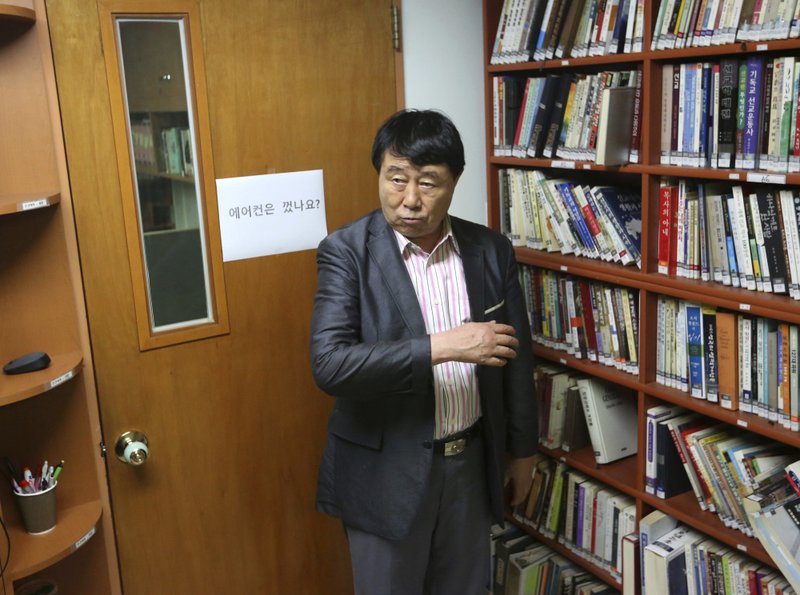 Seo said goose-stepping soldiers likely began appearing in parades between the late 1950s and early 1960s when Kim Il Sung, North Korea’s founder and the grandfather of Kim Jong Un, was solidifying his grip on power. After his death in 1994, his son Kim Jong Il held a larger number of military parades under his “military-first policy” until he died in 2011. Kim Jong Un has had six big parades during his nearly seven years of rule.

Goose-steppers train at their respective military academies or on army bases before gathering in Pyongyang, in places like Mirim airfield, a military airport on the outskirts of the city, for joint practices. Sim trained for six months; Kim said her colleagues in the 1997 parade practiced for one year; another ex-North Korean soldier said in an interview that he trained for two months before a 1998 parade.

The defectors said they trained about 6-10 hours per day and six days a week. Many of their colleagues fainted or were injured during practice and had to be replaced.

Kim said that when parade instructors weren’t satisfied they often hit her and her colleagues with tree branches and flimsy metal rods used to clean rifles. Kim said she and her colleagues were beaten on their feet, calves, arms, jaw, hips and even breasts. 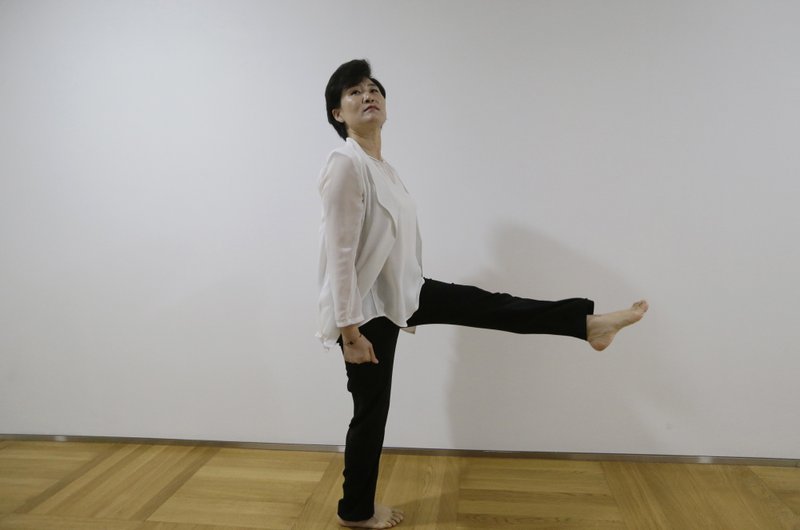 “We were hit a lot … and they always carried those switches,” she said. “I didn’t know whether it was a human rights violation at the time. I saw (my parade training) as a source of pride, even after I came to South Korea” in 2009, she said.

Kim’s training happened during a North Korean famine that was estimated to have killed hundreds of thousands. Malnourished, she said she passed out during a practice in July 1996 because her training unit didn’t have enough food, often eating only rice and salt for each meal. Sim and another ex-North Korean soldier, who requested anonymity because of worries about the safety of his relatives in the North, said their teams were fed well.

Several weeks after quitting her training because of health problems, Kim said she suffered sciatic neuralgia that left her paralyzed below the waist for weeks. Kim said her North Korean doctor told her that her injury was likely caused by the goose-stepping. Other goose-steppers had slipped disks and blood in the urine, she said.

The third ex-North Korean soldier said he had a backache for one and a half months after the 1998 parade. Sim said his training was tough but he wasn’t injured.

Soldiers riding on tanks and armored vehicles during the parades had less severe training than the goose-steppers. Sim, who was an army captain on a trackless trolley car towing an anti-aircraft gun in 1985, said his training then was primarily focused on maintaining his vehicle to prevent it from accidently stopping during the parade.

After the parades, participants are usually awarded commemorative medals, gift boxes with food and beverages and special holidays. They are also allowed to keep the military uniforms they wear during the parades. 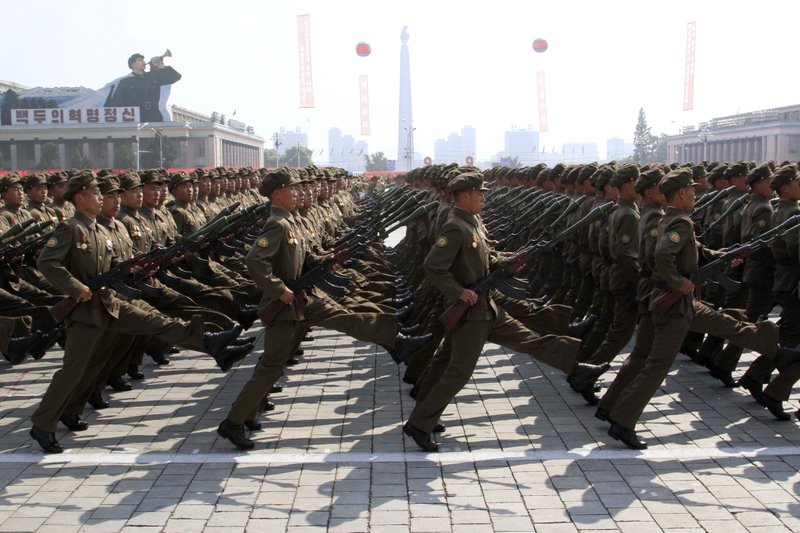 In this Sept. 9, 2013, file photo, North Korean troops march during a military parade to mark the 65th anniversary of the country’s founding in Pyongyang. (AP Photo/Jon Chol Jin)

Kim was commissioned as a second lieutenant, and she got a coveted ruling party membership and was promoted faster than her colleagues, in part, she believes, because of her participation in parade training.

Sim, who was a lieutenant colonel at Pyongyang’s defense command when he fled North Korea in 1998, now works as a pastor who promotes Christianity in North Korea. He hates the North Korean dictatorship but still highly values its military parades.

On the day of his parade in 1972, Sim said his heart was pounding as he smoothly passed by Kim Il Sung, whom North Koreans worshipped as a god-like figure. A female officer collapsed after her appendix burst following her march, and she was praised by military leaders for having concealed her pains while training, Sim said.

“After the parade, I felt a little bit empty. I thought to myself, ‘I trained all those months for something that took just over a minute,’” he said.