Buckle Up, the Sleeping Giant is About to Awaken: Experts Warn the Atlantic Hurricane Season is About to Start with a Vengeance

Hurricane season will arrive with a bang on the East Coast in the coming weeks after a surprisingly quiet August.

A storm brewing off the Caribbean coast could hit the islands and Florida by this weekend if weather conditions continue to worsen. If it does progress to become a tropical storm or hurricane, it will be called Florence.

Meanwhile meteorologists warn ‘there is the potential for two or three tropical features spinning over the Atlantic by the second weekend in September.’

Experts say that the reason for the sudden spike in hurricane activity in the Atlantic Ocean, Caribbean Sea and Gulf of Mexico is because wind shear, which can rip apart developing hurricanes, appears to be dropping.

Meanwhile the Pacific coast is bracing for Hurricane Norman, which has grown into a Category 4 storm.

Forecasters say Norman had maximum sustained winds of 145 mph early Thursday and could grow even stronger before starting to weaken Friday night or Saturday.

It is currently centered about 600 miles southwest of the southern tip of Mexico’s Baja California Peninsula. At the moment, it is far enough from land that no coastal watches or warning are in effect.

Tropical Storm Miriam also churned over the eastern Pacific with maximum winds of 60 mph although it looks like it may miss Hawaii which is recovering from Hurricane Lane. 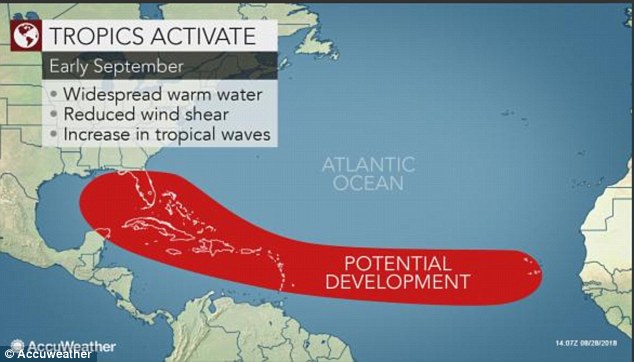 Lane brought historic amounts of rain which forced evacuations on some islands.

No storm-related deaths have been reported, though Big Island authorities said they plucked families from floodwaters and landslides closed roads.

The storm has now begun to weaken and the National Weather Service canceled all storm warnings for the state, several hours after shopkeepers in Honolulu’s tourist-heavy areas already started taking down plywood meant to protect windows if the storm made it that far.

Lane first approached the islands earlier this week as a Category 5 hurricane, meaning it was likely to cause catastrophic damage with winds of 157 mph or above. But upper-level winds known as shear swiftly tore the storm apart.

As flooding hit the Big Island, winds fanned brush fires that had broken out in dry areas of Maui and Oahu. Some residents in a shelter on Maui had to flee flames, and another fire forced people from their homes.

The hurricane season is set to begin on the other coast as Puerto Rico released a new death toll for the devastating Hurricane Maria. 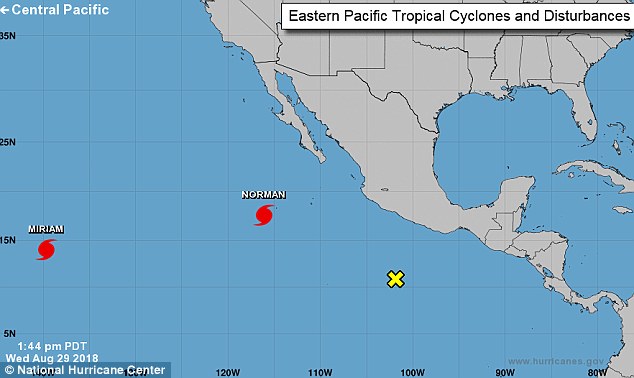 Forecasters say Norman had maximum sustained winds of 145 mph early Thursday and could grow even stronger. Tropical Storm Miriam also churned over the eastern Pacific with maximum winds of 60 mph although it looks like it may miss Hawaii 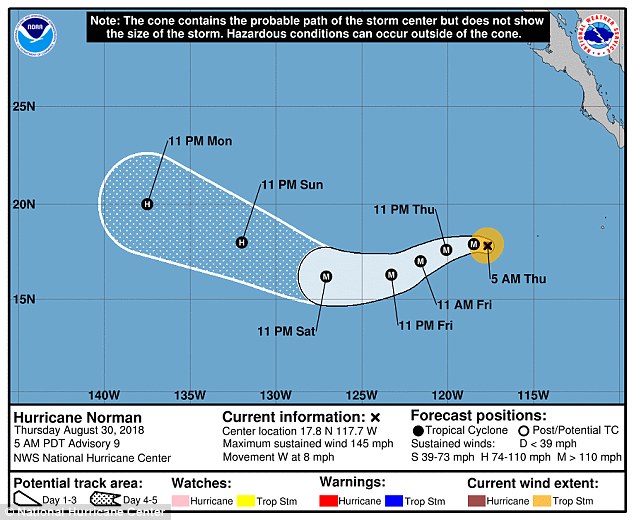 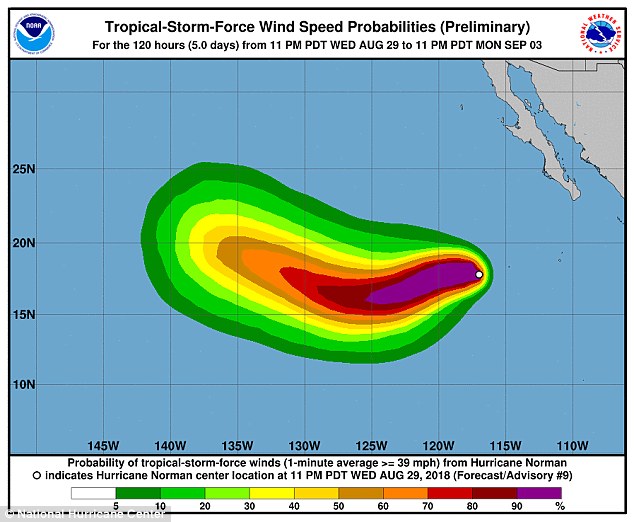 They now know 2,975 died – much higher than the 64 originally reported by the government – in the six months after Maria devastated the island in September 2017 and knocked out the entire electrical grid was made by researchers with the Milken Institute School of Public Health at George Washington University.

‘We never anticipated a scenario of zero communication, zero energy, zero highway access,’ Gov. Ricardo Rossello told reporters. ‘I think the lesson is to anticipate the worst. … Yes, I made mistakes. Yes, in hindsight, things could’ve been handled differently.’

He said he is creating a commission to study the hurricane response, and a registry of people vulnerable to the next hurricane, such as the elderly, the bedridden and kidney dialysis patients.

Rossello acknowledged Puerto Rico remains vulnerable to another major storm. He said the government has improved its communication systems and established a network to distribute food and medicine, but he noted that there are still 60,000 homes without a proper roof and that the power grid is still unstable.

‘A lesson from this is that efforts for assistance and recovery need to focus as much as possible on lower-income areas, on people who are older, who are more vulnerable,’ said Lynn Goldman, dean of the Milken Institute.

Tuesday’s finding is almost twice the government’s previous estimate, included in a recent report to Congress, that there were 1,427 more deaths than normal in the three months after the storm.