Roy Oliver, White Ex-Texas Cop, Found Guilty of Murdering 15-Year-Old Jordan Edwards After Shooting Into a Car of Unarmed Black Teens as They Drove Away from a House Party

A former Texas police officer was found guilty of murder on Tuesday for shooting into a car carrying a group of teenagers, killing a 15-year-old boy.

Roy Oliver, who is white, was found guilty in the death of high school freshman Jordan Edwards, who was black. The teen was in the passenger seat of a car leaving a house party when the officer opened fire in April 2017. Oliver was found not guilty on two aggravated assault charges.

Jordan’s father, Odell Edwards, said after that he wanted to “jump up and down” when he heard the verdict and was “thankful.”

Edwards’ family attorney, Daryl Washington, said Jordan’s father never wanted another family to go through what he went through losing his son.

“This case is not just about Jordan, it’s about Tamir Rice, it’s about Walter Scott, it’s about Alton Sterling, it’s about every African American … who has been killed and has not gotten justice,” he said, referring to other black boys and men that have been killed by police.

“We are just happy that here in Dallas, Texas, that Roy Oliver is going to have to do his time for taking Jordan’s life,” he added. “What he did on that night should have never happened and we’re just happy that we’ve gotten justice today.”

The verdict came Tuesday afternoon on the second day of deliberations. The jury was made up of 10 women — five white, three Hispanic and two black — and two white men.

Roughly 20 minutes before a verdict was announced, jurors sent a note asking what happens if they were split on justification of the shooting,according to NBC DFW. The trial moved into its sentencing phase later Tuesday. Oliver faces up to life in prison.

Texas Gov. Greg Abbott tweeted NBC News’ report on the verdict, saying, “This life should never have been lost.”

White Texas police officer found guilty of murder for fatally shooting black teen in car. This life should never have been lost. https://t.co/SfxnPwXO0V

Since 2005, only 33 law enforcement officers have been convicted of a crime resulting from an on-duty shooting where someone was killed — and Oliver is only the second to be convicted of murder, said Philip Stinson, an associate professor of criminology at Ohio’s Bowling Green State University.

Oliver, who was fired from the Balch Springs Police Department in the Dallas suburbs after the shooting, testified last week that he felt he had no choice but to use deadly force.

He said he fired on the car after seeing it move toward his partner, Officer Tyler Gross, and thinking the officer’s life was in danger. But Gross previously testified that he did not fear for his life and didn’t feel the need to fire his weapon.

Officers had been dispatched to the house party in Balch Springs on a call of underage drinking late April 29, 2017.

Oliver testified that while he was at the home, he heard gunshots outside and believed there was a shooter. As he went outside, he saw the car carrying the five unarmed teenagers.

The gunshots turned out to have been fired near a nursing home in the area.

Jeremy Seaton, a witness who had attended the same house party, testified earlier that it didn’t appear that the car the teens were in was trying to hit the officer.

“We were just kids leaving a party,” Maximus Everette, 15, who was in the back seat with his twin brother, Maxwell, said last year in an interview with NBC Dallas-Fort Worth.

“We shouldn’t have to fear the police when our parents teach us to respect them,” Maximus told the station. “So I don’t see why they would fear just kids leaving a party.”

Oliver was hired in 2011. In 2013, he was suspended and required to take anger management classes after having erupted in a courtroom. He was angry because he had to attend court, according to personnel files obtained by NBC News.

A white former Texas police officer who shot into a car full of unarmed black teenagers at a party and left a 15-year-old dead has been found guilty of murder.

Roy Oliver, 38, has been convicted for firing into the car and killing Jordan Edwards in April 2017.

He was, however, found not guilty on two counts of aggravated assault for firing his rifle into the car full of teenagers.

Edwards, who was sitting in the front passenger seat and trying to leave the party, was shot in the back of the head and died at the scene in front of his brother.

Oliver, who has already been fired from the Balch Springs Police Department, testified that he opened fire after seeing the car move toward his partner. 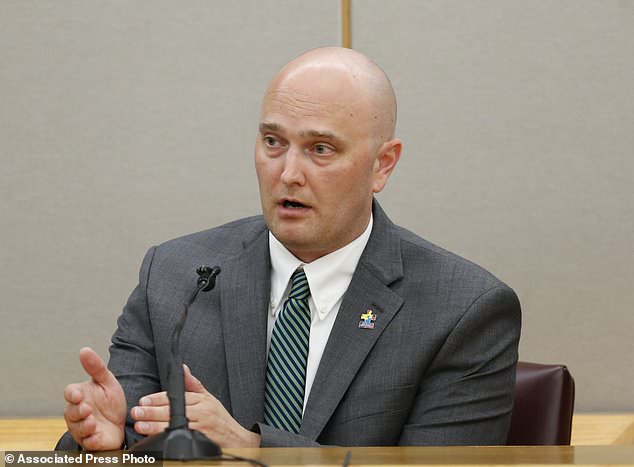 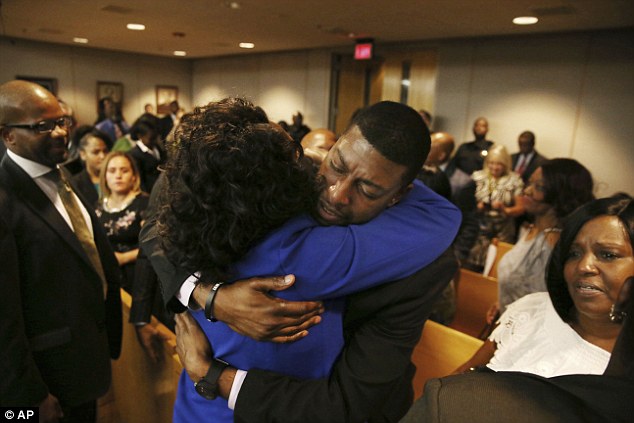 Odell Edwards, father of Jordan Edwards, gets a hug from Dallas County district attorney Faith Johnson after hearing a guilty of murder verdict on Tuesday

The former cop told jurors last week that he thought his partner, Officer Tyler Gross, was in danger. Gross told jurors he didn’t fear for his life and never felt the need to fire his weapon.

The Dallas County jury deliberated for around 12 hours for a period of two days before deciding on a verdict, according to the Fort Worth Star-Telegram.

Edwards’ family clapped and cheered after the verdict was read. 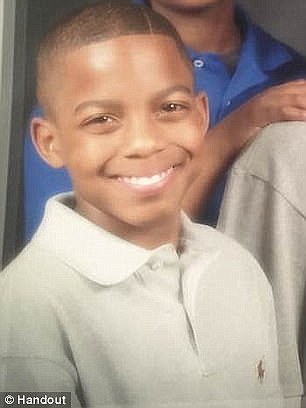 ‘It’s been a long time, hard year, and we’re just really happy,’ Odell Edwards, Jordan’s father, said. ‘We did it.’

Oliver was immediately taken into custody and his bond was revoked.

The jury will now listen to testimony from Jordan’s family, friends, and teachers before determining Oliver’s sentence.

He faces up to life in prison.

Tuesday’s conviction marked the first time in more than 40 years since an on-duty cop has been found guilty of killing someone in a shooting in Texas.

‘It’s about Tamir Rice. It’s about Walter Scott. It’s about Alton Sterling,’ Edwards’ attorney, Daryl Washington, said after the verdict was read, naming other men and boys who had been killed by officers across America.

‘It’s about every unarmed African-American, who has been killed and who has not gotten justice.’

Jordan’s death launched the Dallas suburb of Balch Springs into a national conversation on issues of law enforcement and race.

Experts said ahead of the trial that securing convictions against an officer was challenging, in part because criminal culpability in on-duty shootings is subjective and jurors are more inclined to believe police testimony.

In closing arguments, defense attorneys told the jury they needed to evaluate the circumstances from Oliver’s viewpoint and from what the former officer knew at the time.

But prosecutors described Oliver as out of control and looking for a reason to kill. They argued that his firing into the car wasn’t reasonable.

The shooting came after Oliver and Gross, had broken up a large house party following a report of underage drinking. 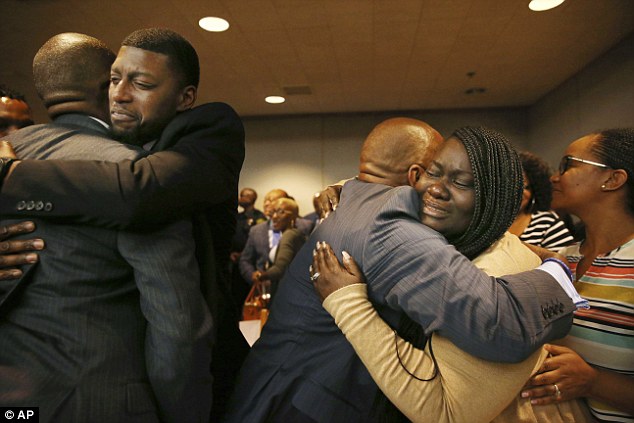 Edwards and Charmaine Edwards, Jordan’s mother, were emotional after the verdict was read on Tuesday afternoon

Both officers were inside the residence when they heard gunfire outside and responded.

Authorities later determined the shots were fired near a nursing home in the area.

Oliver retrieved his rifle and went toward Gross, who was ordering the car carrying Edwards to stop. He claimed his partner had a sense of urgency in his voice.

The officer testified that he saw the car back up and stop for a second before moving forward and going toward Gross.

He claimed he saw movement from a passenger’s silhouette inside the vehicle, and thought Gross had found a shooter or shooters or at least some information on the gunfire.

Oliver said a vehicle can be considered a deadly weapon, so he was left with no choice but to fire his rifle.

Gross, however, testified that he didn’t feel like the vehicle was trying to hit him.

During his testimony, Oliver said it was ‘very sickening’ when he realized he had killed the boy. ‘I was in shock for days,’ he said. 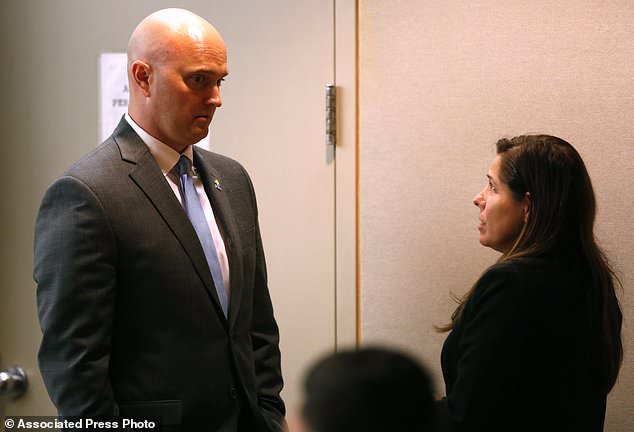 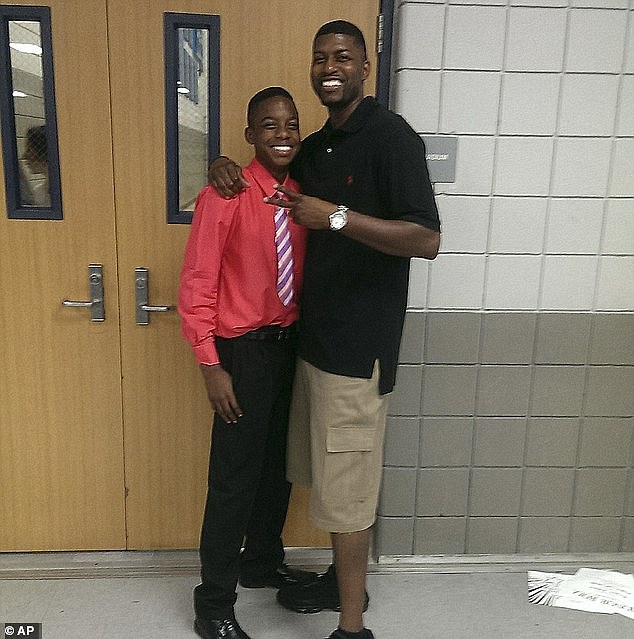 Edwards’s step-mother previously told the court how he was a studious child who was getting A and B grades before he was killed (pictured left with father Odell Edwards, right)

Two teenagers who were at the party testified last week that they were across the street when Oliver fired.

The teens, Eric Knight and Jeremy Seaton, said they could not see a justification for the gunfire.

Seaton said the car was not facing an officer at the time and had steered into the wrong lane of traffic to avoid officers.

The prosecution said all five shots were fired by Oliver after the car had passed Gross. Investigators also said no guns were found in the teens’ vehicle.

Body-cam footage shown during the trial showed Jordan’s brother and his friends all putting their hands outside the car’s windows after he was shot.

Officer Jeremy Chamblee testified that the teens were ‘begging’ for help after Jordan was killed.

‘I specifically heard the driver stating needing help cause his brother was shot dead in the vehicle by a police officer,’ Chamblee said.

Chamblee also revealed that Jordan’s brother asked if they could pray together following the teen’s death.

‘He was asking God to watch over his brother if he doesn’t make it, to keep him safe,’ Chamblee recalled. 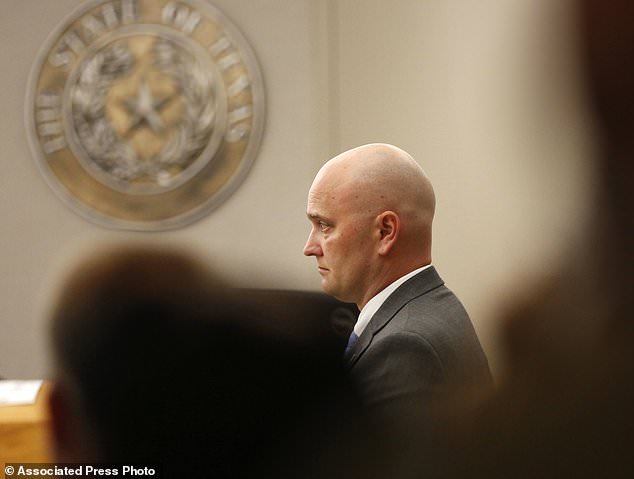 Prosecutors described Oliver (pictured on Monday) as out of control and looking for a reason to kill. They argued that his firing into the car wasn’t reasonable 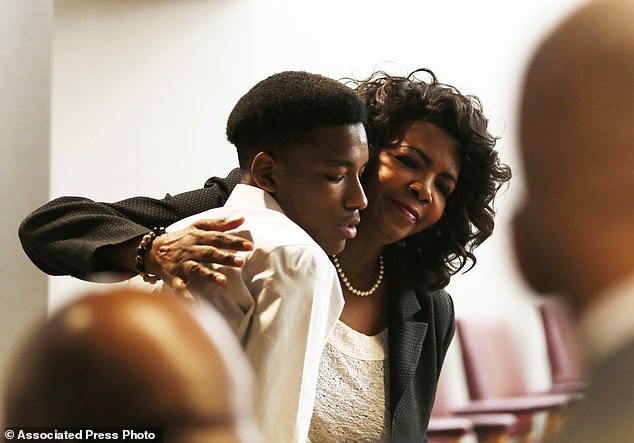 Philip Hayden, a use-of-force expert called by the prosecution, said Oliver used excessive force when he shot and killed Edwards and testified that a reasonable officer would not have opened fire.

Oliver also testified the shooting could have been prevented if one of the bystanders had waved at him and reported the shooters near the nursing home had left the scene.

‘It would have changed the outcome,’ he said.

The defense also asked Oliver about an April 2017 incident in which he was rear ended while off duty and drew his weapon.

Police say he pointed the weapon at the ground after the collision. He was later indicted on two counts of aggravated assault tied to the incident.

Oliver, who said he was driving with his wife and young son at the time, testified he did hold his firearm up against his chest during the encounter.

Defense attorney Bob Gill told the jury in an opening statement last Thursday that the law requires them to view the situation through Oliver’s perspective. 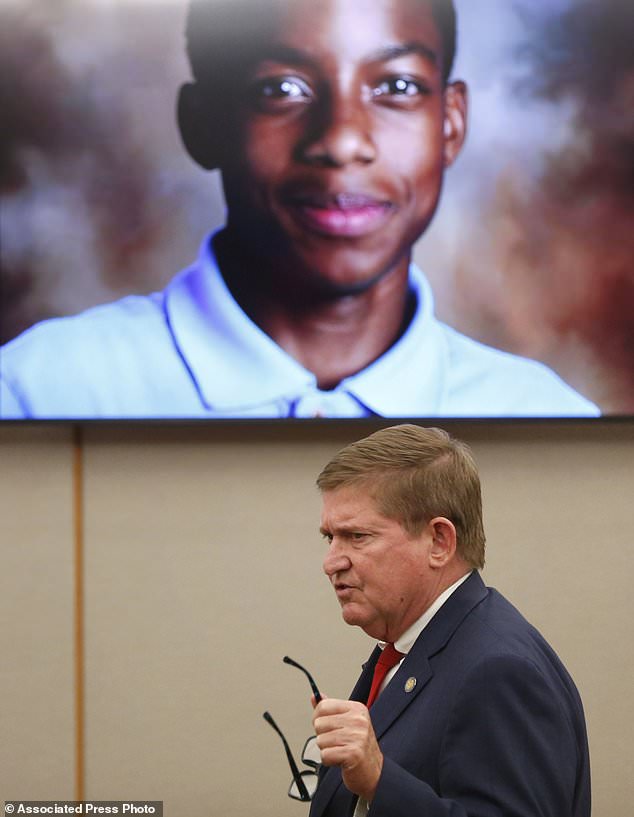 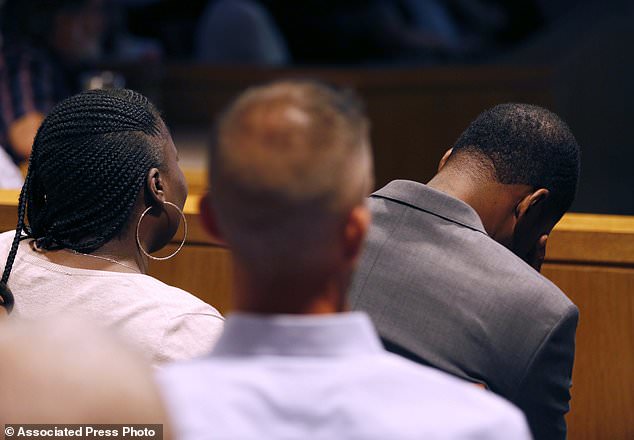 Odell Edwards, father of Jordan Edwards, drops his head to avoid seeing a crime scene photo during a closing argument on Monday

‘It doesn’t matter that looking back on it, in hindsight, we’d all make a different decision now,’ he said in court.

‘We have to look at it how Roy Oliver saw it at the time and what he saw was a significant threat to his partner.’

George Lewis, the Dallas County District Attorney’s chief prosecutor, told the jury that Oliver was reckless with the boys’ lives.

‘They go out, they sacrifice, they put their life on the line to protect us and keep us safe. To protect and serve,’ Lewis said during his closing statement.

‘But keep in mind that is their duty to protect and to serve. When we have police officers like the defendant in this case, Roy Oliver, who go out and they hurt our citizens, that’s where it stops.’

‘That’s where it must stop and you, as the jury, in these cases today have a say in stopping defendants like Roy Oliver.’