The Global Leadership Summit at Willow Creek Community Church began Thursday (Aug. 9) morning by addressing the elephant in the room: Its opening speaker was not the event’s accustomed headliner for 26 years, church founder Bill Hybels.

Instead, Craig Groeschel, senior pastor at Life Church, which meets across the country and online, opened the conference. He began by talking about why he had not backed out of his speaker’s slot despite a still-unfolding sexual harassment scandal that forced Hybels to step down from Willow Creek and that, just 12 hours before the summit’s start, prompted the mass resignation of the church’s board of elders and its lead pastor.

The leadership summit has long showcased Willow Creek’s success and the man who engineered its growth from a neighborhood house church to a 13,000-member, multicampus behemoth. Hybels’ conversational preaching, sharp marketing sense and charisma made the summit popular beyond those interested in copying his church building methods. Past speakers have included former President Bill Clinton and the U2 rocker Bono.

But in April, Hybels stepped down months ahead of his planned retirement, after a Chicago Tribune investigation revealed allegations against him of inappropriate behavior with women. Four speakers, including actor Denzel Washington, pulled out of this year’s summit, and more than 100 sites planning to simulcast the event reportedly canceled.

The weekend before the summit began, lead teaching pastor Steve Carter resigned, citing differences with the church over how it handled the allegations. Three days later, lead pastor Heather Larson and one of Willow Creek’s nine elders stood at a “family meeting” of the congregation to announce Larson and the entire elder board were stepping down to give the church a “fresh start” after new allegations had been made against Hybels. 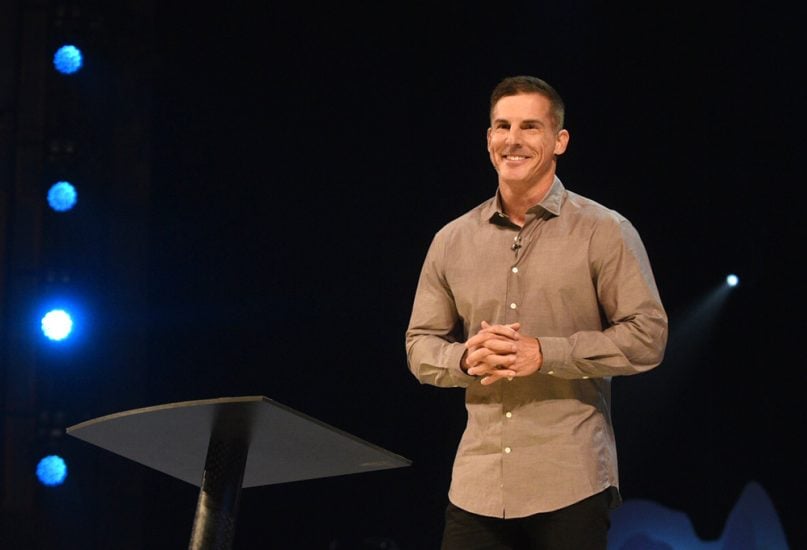 Groeschel said his own reactions to the scandal have run the gamut, from grief to disbelief to anger to “deep compassion” for everyone involved. He decided to speak at the summit, though, for the same reason many decided to attend: “It’s because we know and believe we can make a difference. We must make a difference.”

Those who had signed up to attend the summit seemed to agree. A Willow Creek spokesperson said about 118,000 people were expected to watch via livestream nationwide and about 10,000 in person on Willow Creek’s main campus. About 156,000 people in the U.S. had watched the summit the year before.

The summit will go out to countries around the world next month, and organizers said overall attendance is expected to jump to 445,000, up from 405,000 last year.

Several Chicago-area attendees said they were aware of the allegations against Hybels before they came to the summit.

Andrew Smith, who grew up attending Willow Creek, came to the summit Thursday for the second time to “drink up all the different information that I can from all these great leaders” and apply it to his work as a financial adviser in Chicago.

Smith knew about the allegations against Hybels but he said he was comfortable with the speakers who were there, including Bishop T.D. Jakes of The Potter’s House.

Krista Stiefel of Algonquin, Ill., came with her dad for the sixth year. In the past, Stiefel has hosted a monthly group afterward to discuss each session in detail.

She said Groeschel’s speech had encouraged her to inspire others and she wished she could show it to the group of project managers she leads at Allstate. She thought he addressed the allegations against Hybels well.

Before the summit’s official start Thursday, Willow Creek Association President Tom De Vries said that the allegations against Hybels had created “tremendous turmoil” for the summit as well as the church.

Despite the difficult timing of the resignations, Willow Creek’s leadership felt there was no other way.

“This is really important. Trust has been broken by leadership, and it doesn’t return quickly,” Larson, the lead pastor, said Wednesday evening. “There is urgency to move us in a better direction.”

Several female congregants and former staff have alleged Hybels invited them to hotel rooms, commented on their appearances and, in one case, gave a former co-worker an unwanted kiss. Hybels’ former executive assistant Pat Baranowski alleged in a report Sunday in The New York Times that Hybels had sexually harassed her — fondling her breasts, rubbing against her and once engaging her in oral sex.