Every morning when Achol Kuol wakes up, she borrows a Bible from her neighbor and reads a verse to comfort herself before she meets others in an open-air church rigged from timber. They sing, dance and speak in tongues during the service. Some who feel filled with the Holy Spirit scream and jump — not with joy, but remorse.

Confessions flow as they recall the ones they killed in the civil war back home in South Sudan. They cry out, lamenting ordeals they endure at night. Others weep in prayer as they ask God for forgiveness.

“I can’t sleep unless I keep on praying,” said Kuol, 38, a mother of five. “I always have nightmares. In my dreams I go back to my old village and I see how my friends were shot dead. They keep on calling me, ‘Achol! Achol! Achol!’ And I would wake up screaming.”

For thousands of South Sudanese here in the world’s largest refugee camp, the search for healing from recent horrors involves a quest for God. Saddled with post-traumatic stress disorder in many cases, refugees are often encouraged by camp counselors to attend church as a pathway to healing.

“Many refugees usually go to church because it’s the only likely place in the camp where they can get help to recover from the trauma,” said Gabriel Mayen, a trauma counselor at Bidi Bidi. “The church gives them new hope, which is important to refugees and any person who has experienced trauma.”

South Sudan, the world’s youngest nation, broke into civil war in late 2013 when troops loyal to then-Vice President Riek Machar clashed with forces loyal to President Salva Kiir. The conflict spread quickly into an ethnic clash as the two leaders were representing two major tribes. Christianity is the majority religion in South Sudan. 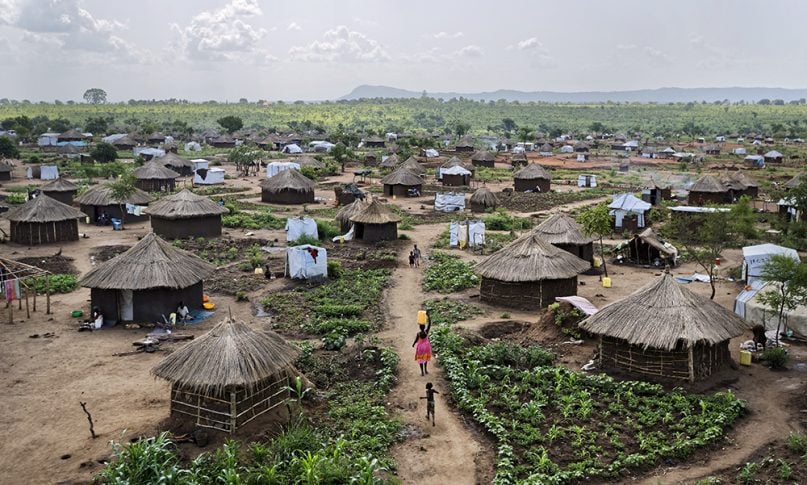 Women and children return home with plastic containers of water, in a section of the sprawling complex of mud-brick houses and tents that make up the Bidi Bidi refugee camp in northern Uganda on June 9, 2017. The number of South Sudanese refugees sheltering in Uganda passed 1 million in August 2017, a grim milestone in what has become the world’s fastest-growing refugee crisis. (AP Photo/Ben Curtis)

This camp, known as Bidi Bidi, is home to more than 250,000 people. Here, dozens of churches have cropped up and are becoming increasingly popular as the traumatized seek a foundation to put their lives back together.

Kuol’s husband was murdered in June last year when government soldiers attacked her town of Yei in southwest South Sudan. She fled with her children, arriving at Bidi Bidi three days later. One child died from hunger during the journey.

“I passed through a difficult time,” she said. “God saved me from death, and I had to accept Him. In God I find peace, and I don’t have nightmares … though the memories of the killings still haunt me.”

More than 30 churches spread across the camp are headed by South Sudanese pastors, according to Ugandan officials. Many church leaders, including pastors, bishops, priests, evangelists and others, moved with their South Sudanese congregations into exile when civil war erupted.

“When these church leaders arrived at the camp, they began their own churches,” said Deng Bol, a refugee teacher and representative. “We have different denominations. Refugees have options here. If they want to go to Catholic or Protestant churches, they can go.”

Pastor John Deng of Christ Ministry Church fled South Sudan in 2016. He said his church is bringing together members of warring tribes, the Nuer and Dinka, and fostering cooperation across tribal lines. The church also provides emotional healing if one loses a family member at the camp or back home in South Sudan, he said.

“The church has played a vital role in unifying the people of South Sudan who had hated each other,” he said. “We are happy that people are living peaceful in the camp away from home.”