A toddler was murdered by her adoptive father under the noses of social workers and doctors who refused to accept he was anything other than a ‘positive parent’, a damning report revealed today.

Matthew Scully-Hicks, 31, from Cardiff, subjected 18-month-old Elsie Scully-Hicks to months of horrific assaults before killing her in an attack so severe her tiny body looked like it had been in a ‘car crash’.

Scully-Hicks, who was married to husband Craig, was visited 15 times by at least three social workers and he made numerous visits to the GP and A&E when he injured Elsie – but there was ‘no concern’ about his parenting.

Professionals viewed him through a ‘positive lens’ and insisted her adoption to the middle class and well-educated gay couple was going well until she died, a Child Practice Review said.

Today Vale of Glamorgan Council social services chief Lance Carver apologised to Elsie’s natural family – who believe she would still be alive today if still in their care.

But Mr Carver also admitted no social workers had been disciplined or sacked over the mistakes because it was ‘not appropriate’.

Yet an official review into her death was published today and said social workers and doctors lacked ‘professional curiosity’ about Elsie’s injuries.

The toddler suffered a broken leg, mystery bruising including one one her head that lasted for eight weeks and was even taken to hospital vomiting blood.

But each time the injuries were written off as common accidents or illnesses after her ‘articulate’ attacker made up excuses.

On May 29 2016 Elsie died, four days after her adoptive father shook her so violently her brain and eyes started bleeding before he threw her headfirst into the floor, fracturing her skull.

Scully-Hicks was jailed for a minimum of 18 years after a trial last year but Elsie’s biological grandmother Sian O’Brien said he ‘got off lightly’ and her granddaughter should have stayed with her.

Today the NSPCC said: ‘This was a needless and violent crime which took the life of a defenseless young toddler.

‘Elsie suffered horrendous physical abuse at the hands of a man who should have protected her and who was viewed by authorities as a positive parent.

‘This review is disturbingly clear that opportunities were missed and information was not shared appropriately’.

Lance Carver, director of social services at the Vale of Glamorgan Council, accepted the findings of today’s report and apologised for errors in Elsie’s case.

‘The findings do indicate that social workers and staff from all agencies saw the adoption as very positive,’ Mr Carver told a press conference in Cardiff.

‘They perceived the adoptive family as a really positive solution for Elsie. The report identifies issues that ‘that positive lens’ meant that they were not looking in the way they should have been.

‘That’s something as an organisation that we should have recognised and taken that fully on board.’ 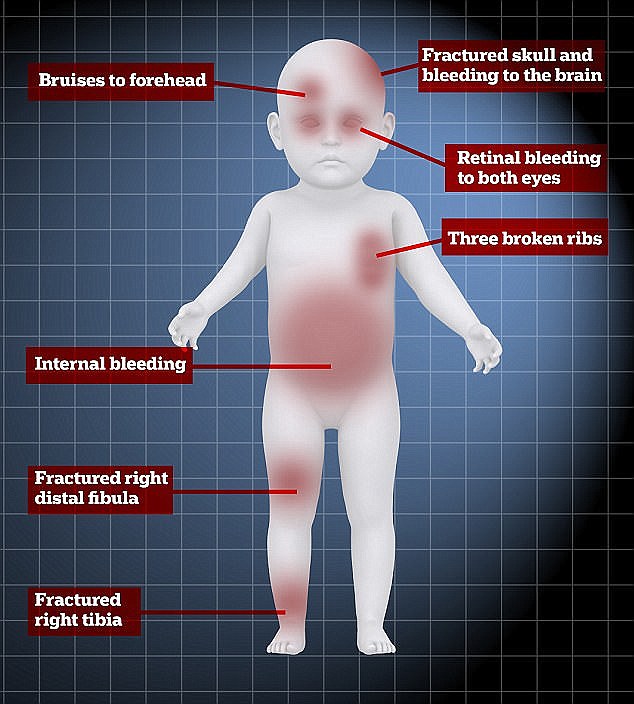 Mr Carver said no disciplinary actions had been taken against any members of staff as the report did not ‘indicate that it would be appropriate’.

Scully-Hicks and his husband Craig were viewed as ‘very positive parents’ for little Elsie after she was taken away from her drug addict natural mother.

But as soon as she moved in her killer started secretly attacking her, branded her ‘Satan in a babygro’ and the ‘exorcist’ and heard calling her a ‘silly little c***’ inside their home in Llandaff.

Eight months after entering his care, and two weeks after being officially adopted by Scully Hicks and his husband, Elsie was murdered.

On May 25 2016 her adoptive father gripped her around the ribs and shook her so violently started bleeding behind the eyes and in two areas of the brain.

She also fractured her skull when her head hit the floor when she was slammed to the ground.

Little Elsie failed to recover from her ordeal and died in hospital on May 29.

It still took a month for her killer to be interviewed by police, on June 27, after the authorities noticed all the suspicious injuries she had suffered since she broke her leg on November 5 2015.

Six months after that police interview he was arrested on suspicion of Elsie’s murder and convicted in November 2017, almost two years to the day after he is first believed to have attacked her.

Scully-Hicks, who sobbed when he was convicted, denied murdering her but was today found guilty by a jury after a four week trial and jailed for a minimum of 18 years. 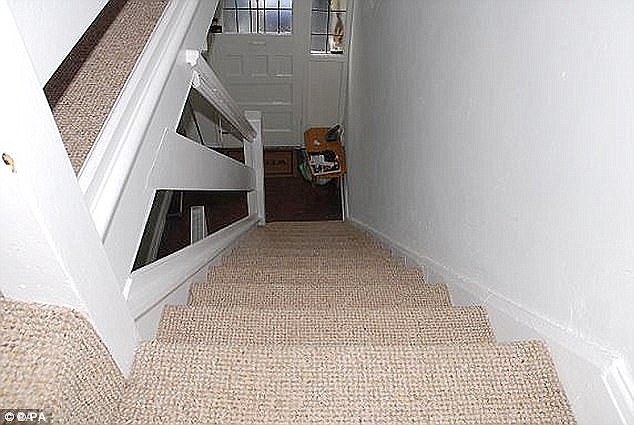 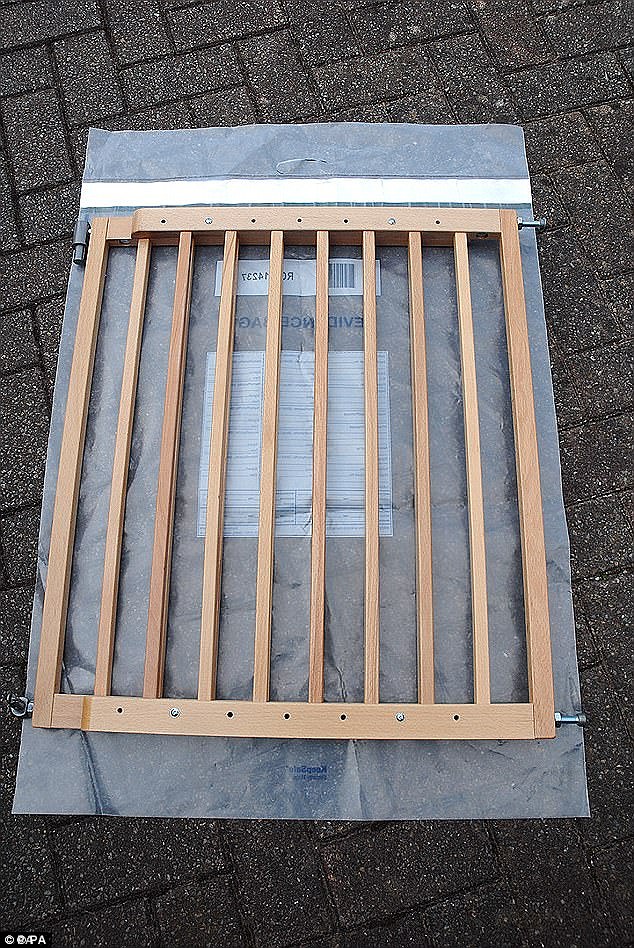 Elsie’s adoption was overseen by the Vale of Glamorgan Council – and senior figures have been quizzed over their handling of Scully-Hicks case.

Today’s Child Practice Review it was a ‘tragic and untimely death of a child’ who had been involved with social services since being born to a drug-using mother.

But it said that the officials handling her adoption could not have predicted that she would be murdered by Scully-Hicks.

It said: ‘There was no information during the assessment stages of the parents that could or would have predicted what happened to this child.

‘The assessment of them as adoptive parents was strong and robust and was compliant with good practice standards.’

It said Scully-Hicks and his partner were ‘perceived to be very positive parents for this child.’

The report said: ‘Given how strongly this view was held, the injuries that the child sustained were never considered as anything other than childhood accidents.

‘Adoption is a positive outcome for almost every child. It is extremely rare for any child placed for adoption to be harmed by their adoptive parents.

‘The parents, their extended family nor any of the professionals working with the child had recognised any concerns regarding possible harm.

‘There were no reports to children’s services of any such concern. As a result there is a lack of professional curiosity regarding the child’s experiences and injuries.’

But it revealed how little Elsie was seen many times by social workers and adoption officers in her short life.

It said: ‘The child was not invisible to agencies at any time.

‘The parents did not indicate at any stage that they were struggling to care for this child and did not require any additional support services.

‘It is evident that during the child’s placement with the parents the child was seen on many occasions by several professionals within the agencies.’

It hit out at errors by not flagging up injuries suffered by Elsie before her death.

The report states: ‘The ommission of identifying the second fracture to the child’s upper leg on the X-ray was a missed opportunity to raise safeguarding concerns and instigate child protection procedures.

‘The observations and recording of the large bruise to the child’s forehead both by children’s services and health was absent.

‘This resulted in the large bruise becoming ‘invisible’ to professionals and did not form part of building an overall picture of what was happening to the child before the final report to the court prior to the adoption order hearing being made.

‘There is always learning to be gained and this case is no different.

‘Some new information and the learning from it has been gained from other proceedings primarily through the criminal trial. The conclusion is that there are some systems and practices that should be improved.’

When he was jailed Scully-Hicks looked on emotionless as Judge Mrs Justice Nicola Davies told him he had been ‘entrusted to protect and care’ for Elsie – but instead murdered her.

In January 2015 Scully-Hicks and his husband Craig were visited by an adoption manager after expressing a desire to become fathers.

Elsie was first put in the care of Scully-Hicks in September 2015 and the process was finalised nearly eight months later.

Between the meeting and her death, social workers visited their home 15 times and the toddler suffered bruises on her head, face and body, had broken her leg and had fallen down the stairs at the house.

Over the next seven months she also had mystery bruises on her head and was rushed to hospital in March last year after allegedly falling down the stairs.

Social workers and health visitors noted various injuries to Elsie’s body including bruises to her head and a broken ankle.

Elsie was even rushed to hospital after vomiting blood – but Scully-Hicks claimed she had fallen down the stairs.

But officials didn’t raise any concerns which would have stopped the adoption process and potentially saved Elsie.