The nation’s largest home-demolition program, which has torn down more than 14,000 vacant houses across Detroit, may have inadvertently created a new problem by spreading lead-contaminated dust through some of the city’s many hollowed-out neighborhoods.

Health officials are concerned that crushing walls covered with lead paint generates dust that can settle on nearby homes or drift through open windows, endangering families who have stayed long after their neighbors fled during Detroit’s long decline.

Because the risk of lead exposure is especially worrisome for children, Detroit Health Department teams plan to go door-to-door next week in some neighborhoods to seek out potential hazards and do in-home testing of children.

“We’re kind of throwing the kitchen sink at it a little bit,” said Health Director Dr. Joneigh S. Khaldun. Since the problem involves children, “we have to do everything we can” to ensure the demolition program “is as safe as possible.”

Health department data released last year showed elevated blood lead levels among children living in several areas where the dilapidated structures have been knocked down. The city has not determined if the demolitions caused the increase, but officials curtailed some of the work until the onset of colder weather, when windows are more likely to be closed and children less likely to be outdoors. 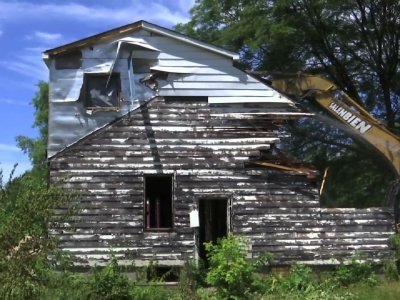 Detroit has tens of thousands of abandoned houses and has torn down more than 14,000 in recent years. But ridding itself of one problem may have inadvertently created a more serious one involving lead paint issues. (July 19)

The at-risk neighborhoods include some of the poorest parts of Detroit, which has one of the highest poverty levels in the U.S.

Lead paint has long been the primary cause of lead poisoning in the city, where most homes were built well before 1978, when lead paint was outlawed. But the mass demolitions started only a few years ago.

A 2014 survey found more than 70,000 vacant houses, many of them relicts of the mass exodus from the city that began in the 1950s. Since then, Detroit’s population has plummeted from about 1.8 million to 670,000. As they decayed, the empty homes became havens for squatters, drug users and criminals.

Tamara Rollins lives on the east side in an area bordering one of the five most affected zip codes. When she moved into her rental home, demolition crews were rolling through the neighborhood.

Rollins is conflicted. She has a 3-year-old son who needs to be protected from lead, but being safe from crime trumps that concern.

“A lot of stuff happens in vacant houses,” Rollins said while holding her son. “It also makes the property value go down, and it makes the neighborhoods look bad.”

Detroit is not alone is trying to safely raze unoccupied homes. Baltimore has torn down about 2,700 vacant buildings since 2010. Detroit’s program is larger and has been awarded more than $250 million from the federal government for blight elimination.

Even at low levels, lead exposure can cause reduced intelligence, impaired hearing and irritability in infants and young children. They are most often exposed by eating paint chips or coming in contact with contaminated dust or soil.

Living within 400 feet of a demolition site increased the odds of elevated lead in children 6 years old and younger by 20 percent during summer months, the health department study found. Demolitions may be to blame for about 2.4 percent of cases involving elevated lead in the blood, according to the study of about 50,000 children between 2014 and 2016.

The research did not establish the precise source of the lead.

“We’re not sure if dust is getting into the home next door or if children are playing in it,” Khaldun said.

For families in affected areas, the city offers educational materials, home visits with a nurse and other services. If lead-based paint or other hazards are found in the homes, officials work with families to get them removed, Khaldun said.

Other cities and states are grappling with similar lead issues.

Ohio’s health department created a list last year of homes that have serious lead paint problems. The database included homes and apartments that were ordered vacated after their owners refused to clean up lead paint. Children who had lived in the homes tested positive for high lead levels.

Back in Detroit, whenever Dazelle Spires walks out his front door, he sees the beaten-down houses and is reminded of how much his neighborhood has deteriorated. The 43-year-old Home Depot employee says the empty homes “accumulate problems” and should be bulldozed.

The risk that lead-contaminated dust could hurt children “is not a good thing,” he said. But tearing down the old houses is more urgent because it ends “the problem that’s happening now.”