President Donald Trump’s persistence in pursuing friendly ties with Vladimir Putin has highlighted a growing disconnect within his administration over Russia policy. Trump speaks fondly of Putin and a desire for better relations with Moscow, but the rest of his executive branch remains highly critical and deeply suspicious of the Russian president and the Kremlin’s intentions.

The stark contrast in approaches has been thrown into sharp relief as Trump and Putin prepare for their summit in Finland on Monday, amid unremitting criticism of Russia from Trump’s State Department, Justice Department, Treasury Department and Defense Department.

That might be explained as a good cop-bad cop strategy with Russia. But the mixed messaging has left America’s friends and allies confused, particularly after a contentious NATO summit where Trump questioned the value of the alliance that Putin has long denounced and sought to weaken.

Just three days before the Helsinki summit, the Justice Department announced the indictment of 12 Russian intelligence officers in special counsel Robert Muller’s investigation into Moscow’s meddling in the 2016 U.S. presidential election. That brings to 25 the number of Russians charged in the investigation. Trump has denied any collusion with Russia and has repeatedly cited Putin’s denials of any Russian interference in the campaign, suggesting there is little or nothing he can do to demand accountability. The Kremlin has denied that the Russian state interfered in the election. 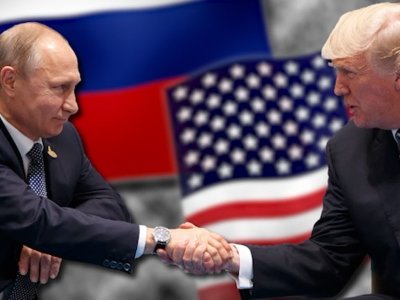 After tumultuous visits to NATO and the UK, US President Donald Trump heads to Helsinki, Finland, for a much-anticipated meeting with Russian President Vladimir Putin Monday. The agenda for the one-on-one meeting is not completely clear. (July 13)

The indictments were unsealed just hours after Trump again referred to Mueller’s inquiry as a “witch hunt” and after the president told reporters at a news conference with British Prime Minister Theresa May, “I think I would have a very good relationship with Putin if we spend time together.”

A day earlier in Brussels, Trump did say he would raise the election issue with Putin, but also said: “I don’t think you’ll have any ‘Gee, I did it, I did it. You got me!’ There won’t be Perry Mason here, I don’t think. But I will absolutely, firmly ask the question.”

Trump also has expressed little interest in continuing the harsh U.S. criticism of Russian activities in Syria, Ukraine and elsewhere, and of Russia’s human rights record. In fact, he’s raised doubts about U.S. demands for Russia to return to Ukraine the territory of Crimea it annexed in 2014, and has suggested a bargain could be in the works for Russia’s ally Bashar Assad to remain in power indefinitely in Syria.

Contrast that with the messaging of the State Department.

Under Trump, the department has issued regular stinging critiques of Russia, including on human rights and press freedom. Those have been sustained since former CIA Director Mike Pompeo was installed as top U.S. diplomat in April and despite the president’s growing calls for friendship with Putin.

Ahead of Russia’s national day on June 12, Pompeo said the United States honors “the citizens of the Russian Federation and their aspirations for the democratic principles of universal freedom, civil liberties, and the rule of law.” On July 6, department spokeswoman Heather Nauert condemned the “selective targeting” by Russia of U.S.-funded news organizations. And this Thursday the department criticized a “pattern of intimidation and violence against those who express dissent across Russia.”

Pompeo has also been steadfast in his support of NATO.

While Trump was questioning the commitment of NATO allies at this past week’s summit in Brussels, where leaders agreed on modest steps to improve military readiness in Europe, principally to counter Russia, Pompeo was lauding the 29-nation grouping as “the most successful alliance in history.”

Defense Secretary Jim Mattis has been no less critical of Russia and its attempts to weaken or entirely subvert trans-Atlantic alliances.

“Putin seeks to shatter NATO,” he told graduates of the U.S. Naval War College last month. “He aims to diminish the appeal of the Western democratic model and attempts to undermine America’s moral authority. His actions are designed not to challenge our arms at this point but to undercut and compromise our belief in our ideals.”

Measure that against Trump’s suggestion at a rancorous summit of the Group of Seven last month in Canada that the leading industrialized countries include Russia in their elite grouping of democracies — a suggestion that got short shrift from the other nations.

And as Trump has talked about bringing Putin back into the international fold, the Treasury Department has continued to impose sanctions on various Russian officials, companies and businessmen.

Days after the G-7, the Treasury blacklisted five Russian companies and three individuals, some of whom are accused of directly supporting Russia’s intelligence agency in its efforts to carry out cyberattacks, including intrusions into America’s energy grid and threats to underwater cables that transmit much of the world’s communications data.