President Donald Trump closed out a turbulent 30-hour visit to England on Friday that featured massive protests, moments of pageantry and startling diplomatic backflips as the U.S. leader tried to smooth over controversies on trade, Brexit and his critical assessment of British Prime Minister Theresa May.

After a breach of protocol in bashing his hosts, Trump was on his best behavior as he wrapped up the visit, insisting the U.S.-U.K. relationship is at “the highest level of special” before dropping by Windsor Castle for tea with the queen and heading off for a weekend at one of his golf courses in Scotland. He left a trail of double-talk and chaos that has become a pattern in the U.S. president’s recent overseas travels.

Trump’s pomp-filled visit to the U.K. was overshadowed by an explosive interview in The Sun newspaper in which he blasted May, blamed London’s mayor for terrorist attacks against the city and argued that Europe was “losing its culture” because of immigration.

The president who prides himself on not apologizing did his own version of backpedaling at a news conference with May on Friday, seeking to blame his favorite foil for any perceived friction with May, whom he lavished with praise after having questioned her leadership.

The president then urged reporters to listen to a full recording of the interview, which he said would give the full picture. But the audio already posted on The Sun’s website only undermined Trump’s familiar charge of “fake news.” 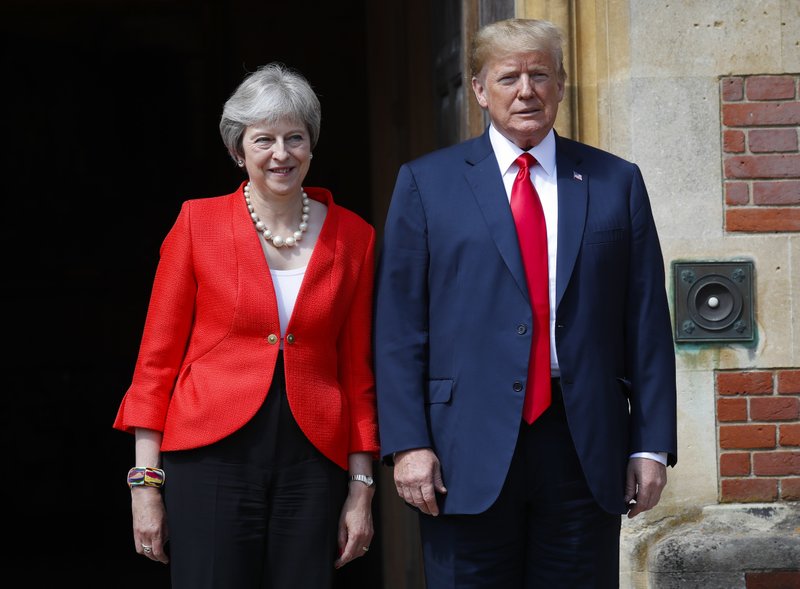 In the interview, Trump criticized May’s plan for Brexit and said it may cause a proposed U.K.-U.S. trade deal to collapse. He questioned her competence just as her government is in turmoil from contentious negotiations on how Britain will leave the European Union.

“Well, I think the deal that she is striking is not what the people voted on,” Trump said in the interview. He also praised one of May’s political rivals, former foreign secretary Boris Johnson, who resigned from her government in protest this week. The president backed away from the comments on Friday, saying of May’s Brexit talks: “Whatever you’re going to do is OK with us. Just make sure we can trade together. That’s all that matters.”

May, for her part, praised the strength of the British-U.S. bond. But in a gentle rebuke, she said: “It is all of our responsibility to ensure that trans-Atlantic unity endures.”

As for her relationship with Trump, she said: “We are friends.”

Trump was greeted by massive protests across Britain, including tens of thousands of demonstrators who filled the streets of London alongside a giant balloon that flew over Parliament on Friday depicting him as a cell-phone-toting angry baby in a diaper.

In a frenetic news conference at Chequers, May’s official country house, an unrestrained Trump blamed his predecessor for Russian aggression in Crimea, placed fair trade at the center of Britain’s efforts to leave the European Union, defended his beliefs that immigration has damaged Europe and repeatedly jousted with television correspondents’ whose coverage he found critical.

The news conference was a scene in itself, featuring the moos of cows in the distance. And Trump at times drew laughs from some British reporters, who jeered his criticism of the media and openly laughed at his numerous boasts.

The president’s bombast at Chequers was offset by a rare moment of delicacy hours later, when a chauffeured Range Rover took Trump and first lady Melania Trump to the courtyard of Windsor Castle, where Queen Elizabeth II was awaiting them under a canopy on a dais.

The president and queen then broke off to review the troops, walking slowly past a line of Coldstream Guards wearing traditional bearskin hats. While Trump typically likes to take the lead, he appeared mostly to follow the queen’s direction, adjusting his pace to hers.

The meeting with the queen, a traditional sign of prestige and power, was lost to some, as U.S. cable networks began cutting away to cover the Russian indictments. And calls from Congress grew louder for Trump to cancel Monday’s meeting in Helsinki with Putin, whom Trump has previously declined to challenge on 2016 election meddling.

In Britain, the takeaway from Trump’s trip across the pond will probably be the interview, in which he accused May of ruining what her country stands to gain from its Brexit vote to leave the EU. Trump linked his own election to the June 2016 referendum in which a slim majority of British voters supported leaving the EU.

Up to 100,000 people massed in London for demonstrations against the president’s visit. Marchers gathered in central London before walking through the center of the city to Parliament — where earlier the 20-foot (six meter) baby blimp hovered overhead. Many protesters used humor to convey their opposition. One sign read “Trump wears poorly tailored suits,” another proclaimed “Overcomb Brexit.” One man was selling rolls of “Trump toilet paper” emblazoned with a picture of the president.

Trump acknowledged feeling unwelcome in the city, and blamed that in part on Mayor Sadiq Khan, who gave protesters permission to fly the baby Trump balloon.

“I guess when they put out blimps to make me feel unwelcome, no reason for me to go to London,” he told The Sun, which is owned by his media ally, Rupert Murdoch, owner of Fox News in the United States. 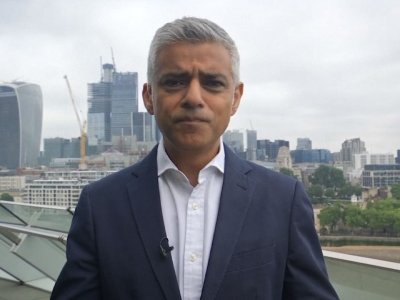 London Mayor Sadiq Khan says it’s important to celebrate free speech, and the protests in London are a part of that.

Trump also blamed recent terrorist attacks there on Khan, who is Muslim. The president claimed Europe is “losing its culture” because of immigration from the Middle East and Africa.

Khan, whose grandparents are from Pakistan, responded by questioning why Trump repeatedly criticizes him.

“Paris, Nice, Brussels, Berlin. Cities in America all suffered terror attacks,” Khan told British broadcaster Sky News. “And it’s for President Trump to explain why he singled me as the mayor of London out and not the mayors of other cities and leaders of other cities.”

Additional protests were waiting for Trump in Scotland as he took a weekend break before traveling to Finland to meet Putin.