There Is a Devil Loose: Friend of Shady McCoy’s Ex-Girlfriend Calls Him ‘the Devil’; LeSean McCoy’s Ex-Girlfriend Uses Her Lawyer to Imply He Played a Role in Home Invasion Pistol-Whip Attack That Left Her Badly Beaten After He Changed the Security System and the Assailant Demanded Jewelry Given to Her by the NFL Star

The victim of a home invasion at the home of Buffalo Bills running back LeSean McCoy has hired a lawyer, and her representation has strongly implied the NFL player played a role in the brutal attack.

Delicia Cordon, McCoy’s ex-girlfriend, was pistol whipped, robbed, hit in the head and locked in a bathroom early on Tuesday morning when a man broke into the Georgia home as she slept.

Her lawyer, Tanya Mitchell Graham, told DailyMail.com McCoy had suggested to Cordon she would be robbed of pieces of jewelry he had given her in the past, and had changed the security system to the home, but refused to share access to it with his ex.

McCoy has denied allegations he was involved in any way in the attack.

A statement released by Ms Graham says Cordon was ‘physically assaulted in the home by a male assailant who entered the home with no signs of forced entry’ about 3am on Tuesday.

‘The assailant demanded specific items of jewelry that had been previously gifted to Ms. Cordon by Mr. McCoy, which Mr. McCoy had requested back on many occasions,’ the statement read.

‘In fact, after Ms. Cordon refused to return her jewelry gifts to Mr. McCoy, he would often suggest to Ms. Cordon that she could be robbed because the jewelry was expensive.’

On June 1, while Cordon was away from the property where she had been living with her children sine October 2016, McCoy allegedly ‘had his family, friends, and laborers attempt to wrongfully evict Ms. Cordon from the residence while Ms. Cordon was out-of-state attending her sister’s graduation’, Ms Graham said.

Able to see what was happening through remote access to the home’s security system, Cordon called police and stopped the eviction.

Ms Graham said after the incident, McCoy had the old cameras removed from the home and cancelled the security service.

‘She has no access to arm or disarm the alarm.’ 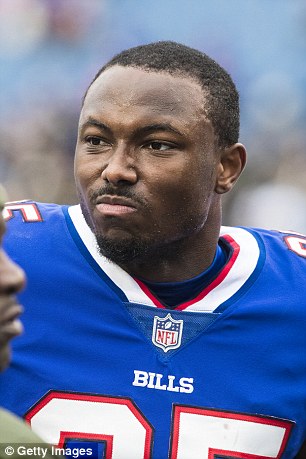 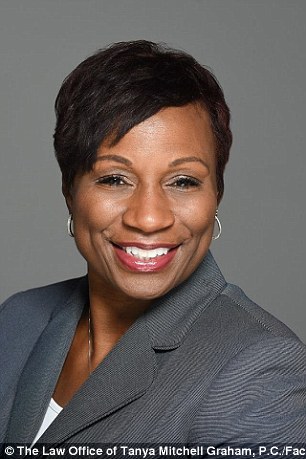 Buffalo Bills linebacker McCoy (left) has denied all involvement in the attack, but Cordon’s lawyer, Tanya Mitchell Graham (right), says McCoy had suggested to Cordon she would be robbed of pieces of jewelry he had given her in the past, and had changed the security system to the home, but refused to share access to it with her

Ms Graham, who is described on her website as a ‘pitbull in a skirt’, does not directly accuse McCoy, but also claims the running back has a history of having others act on his behalf, particularly in a recently filed eviction proceeding, where he had another person fill out forms for him.

Ms Graham has also alleged since the attack, the Bills player has not called to check in on Cordon, despite having had a relationship with her since 2016.

Emergency personnel were dispatched to McCoy’s home to attend to a female victim who was said to have been hit in the head and locked in a bathroom on Tuesday morning.

The allegations first arose in a disturbing Instagram post where the two-time All-Pro was accused of beating a woman, believed to be his ex-girlfriend Delicia Cordon.

In audio obtained by Broadcastify and released on Tuesday afternoon, an operator can be heard sending police to a Milton, Georgia home that is believed to be McCoy’s: ‘We do have [police] en route in reference to a home invasion where a phone was taken.’

McCoy, 29, previously sued Cordon in an effort to force her to move out of a home he owns, according to TMZ.

In the original Instagram post, which has since been deleted, McCoy is also accused of beating his son, his dog, and using steroids.

@miamor_i_adore posted two pictures of Cordon – one reportedly taken on Monday, where she is seen unharmed and another in which she is unconscious with her face covered in drying blood and bruises 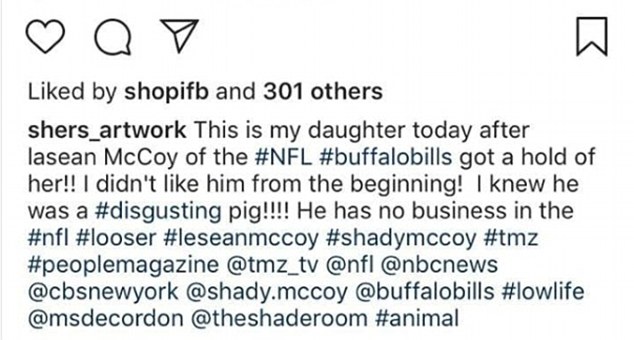 Pictured: Comments from Cordon’s mother regarding the attack on her daughter on Tuesday morning, where she alleges McCoy was involved

‘@shadymccoy is THE DEVIL!!!’ the post, written by Cordon’s friend ‘Mia’ begins.

‘YOU ARE AN ANIMAL!!!!!! We didn’t say anything about how you beat your dog “Henny” into kidney failure. Let’s not talk about all the times my best friend had to stop you from VICIOUSLY beating your son for small things like peeing in the bed. We kept quiet about your drug usage … all the ILLEGAL steroids and needles you were using, but we will not keep quiet about this!!!!!!’

The sentiments were shared by her mother, who wrote: ‘This is my daughter today after LeSean McCoy got a hold of her!’

‘I didn’t like him from the beginning, she continued. ‘I knew he was a disgusting pig.’

Her sister Karessa and friend Cicely Billups made similar posts.

According to TMZ, police were responding to an intruder who left two female victims.

‘The preliminary investigation indicates that this residence was specifically targeted by the suspect or suspects, and not a random incident,’ a police spokesperson said. ‘When officers arrived they found one victim who had been physically assaulted by a lone intruder.

The Milton police did not immediately respond to a records request. They have not identified any suspects or suggested McCoy is involved.

‘For the record, the totally baseless and offensive claims made against me today on social media are completely false,’ wrote McCoy. ‘Further more (sic), I have not had any direct contact with any of the people involved in months.’