The eight boys rescued from a flooded cave in northern Thailand are in “high spirits” and have strong immune systems because they are soccer players, a senior health official said Tuesday, as rescuers prepared for a third push to rescue five still deep in the cave.

Jesada Chokdumrongsuk, deputy director-general of the Public Health Ministry, said the first four boys rescued, aged 12 to 16, are now able to eat normal food. Two of them possibly have a lung infection but all eight are generally “healthy and smiling,” he said.

“The kids are footballers so they have high immune systems,” Jesada said. “Everyone is in high spirits and are happy to get out. But we will have a psychiatrist to evaluate them.”

It could be at least seven days before they can be released from hospital, Jesada told a news conference.

Family members have seen at least some of the boys from behind a glass isolation barrier, and Jesada said doctors may let the boys walk around their beds Tuesday.

It was clear doctors were taking a cautious approach. Jesada said they were uncertain what type of infections the boys could face “because we have never experienced this kind of issue from a deep cave.” 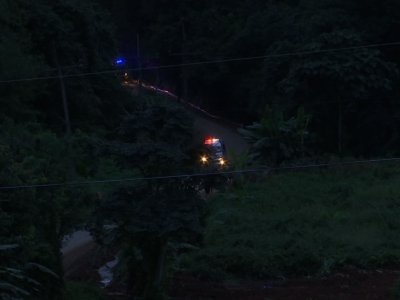 Three more ambulances were seen leaving the area around the flooded cave in northern Thailand where members of a youth football team have been trapped for more than two weeks. 8 of the 12 boys have been brought out of the cave system by divers. (July 9)

The second group of four rescued on Monday are aged 12 to 14. Four boys and their 25-year-old soccer coach remain deep in the cave, an ordeal that has lasted more than two weeks after they trapped inside by floods.

Four ambulances and a convoy of other vehicles arrived at the cave site Tuesday morning as rains hit the region. Officials heading the rescue operation had said they were preparing a third rescue mission.

Monday’s rescue effort took about nine hours, two fewer than the day before, in a sign of growing confidence and expertise. Each of the rescued boys has been guided through the dark winding cave by two pairs of divers.