President Donald Trump opened up attacks on an array of targets from the ‘crooked press’ to Sen. Elizabeth Warren at a lively Montana rally – where he also defended Russian President Vladimir Putin as ‘fine’.

Trump brought back his ‘Pocahontas’ attack on Warren, a leading liberal critic, and even joked about giving her a DNA test, in another dig at her prior claim of Native American heritage based on stories from Oklahoma relatives.

‘I’m going to get one of those little DNA kits and if I’m debating her, we will toss it to her, very gently so it doesn’t injure her arm, and we’ll say, ‘Pocahontas, I’ll give you a million dollars if you take the test to show you’re an Indian!” Trump said.

Warren has called the attacks on her by Trump a ‘racist slur.’ 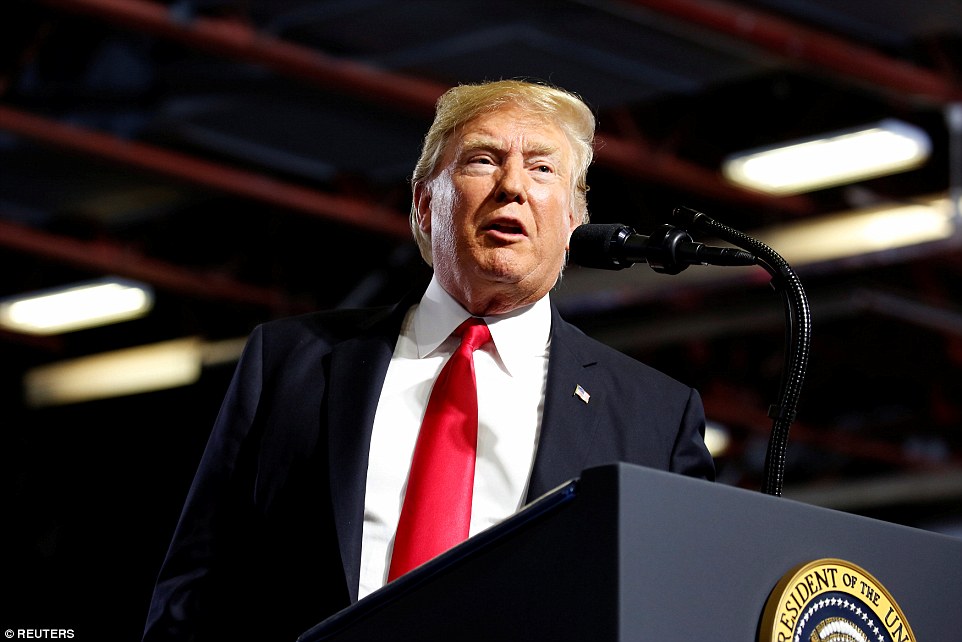 President Donald Trump opened up attacks on an array of targets from the ‘crooked press’ to Sen. Elizabeth Warren and Rep. Maxine Waters Thursday 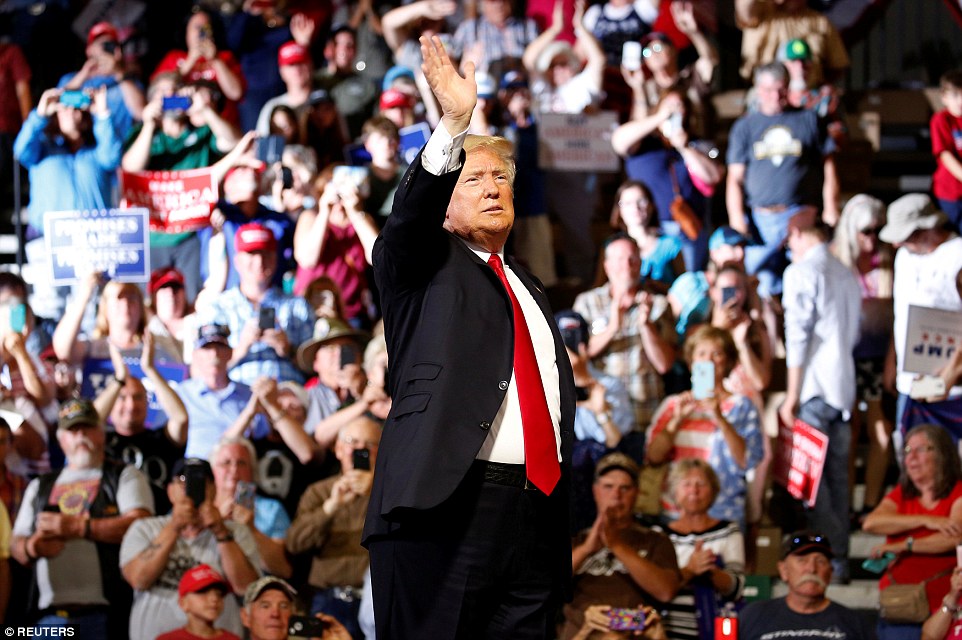 Trump once again called liberal California Rep. Maxine Waters a ‘low-IQ individual’ and tried to cast her as the face of the Democratic party, linking her to Democratic Sen. Jon Tester, who is seeking reelection in Montana.

‘I said it the other day, yes, [Waters] is a low-IQ individual. Honestly, she’s somewhere in the mid-60s, I believe,’ Trump said.

Waters has called for impeaching Trump, who repeated his insistence there was ‘no collusion’ with Russia during the campaign. He said the issue was an ‘excuse’ for a party that ‘actually got their a** kicked.’

Trump continued to rehash his electoral win, and diminished the popular vote, which he lost.

He said the Electoral College was ‘much tougher than the so-called popular vote, where people vote four times.’

Coming in for better treatment was Putin, who will meet Trump at a summit meeting in Helsinki this month.

Trump said Putin was ‘fine’ as he defended his upcoming summit meeting with Russia’s president – and even excused the Russian leaders’ KGB past.

Trump issued his defense of Putin as he said he would be ‘prepared’ for the summit and would do ‘fine’ himself going up against the judo-practicing former KGB colonel. 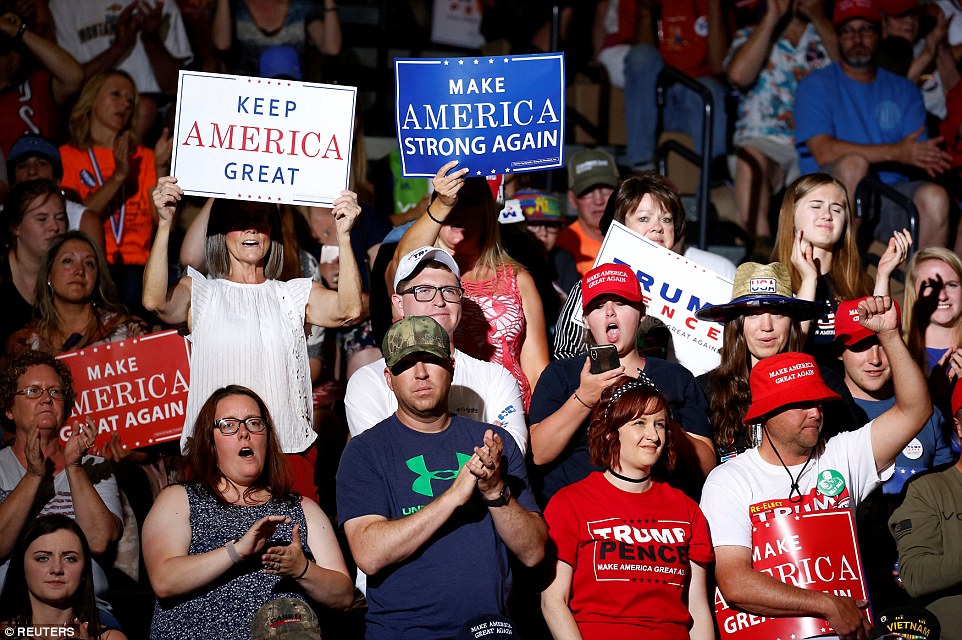 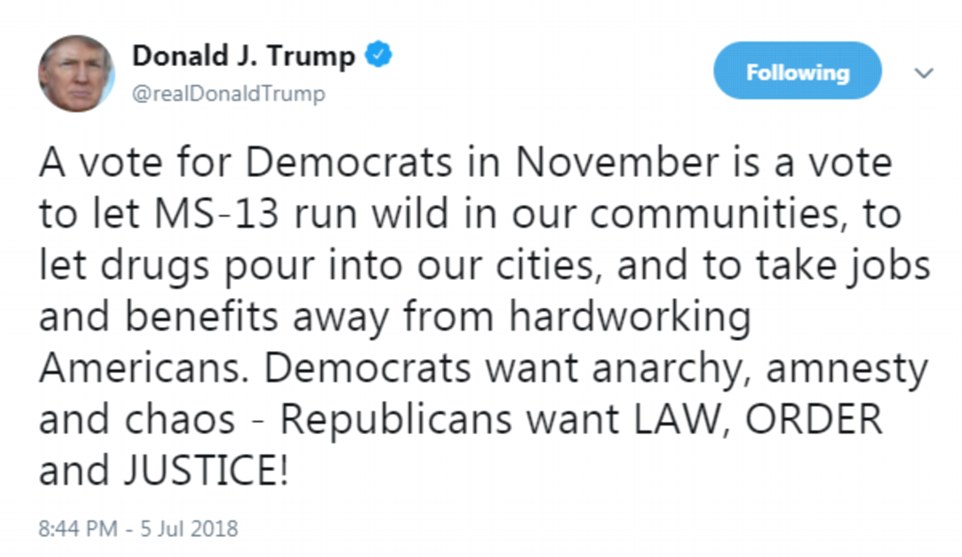 ‘You know: President Putin is KGB and this and that,’ Trump said, mocking how people describe his counterpart.

‘You know what? Putin’s fine. He’s fine. We’re all fine, we’re people. Will I be prepared? Totally prepared. I’ve been preparing for this stuff my whole life. They don’t say that,’ Trump said, pointing to the media.

Trump wasn’t willing to give slack to Warren, however. ‘Pocahontas, to you I apologize,’ the president said. ‘To the fake Pocahontas, I won’t apologize.’

Trump tried to blast Tester as out of touch. ‘He showed his true colors with his shameful, dishonest attacks on a great man,  a friend of mine,’ Trump said, recounting how Tester helped bring down Dr. Ronny Jackson, Trump’s pick to run the VA.

He blasted Tester, saying: ‘A vote for Jon tester is a vote for Chuck Schumer Nancy Pelosi and the new leader of the Democrat Party, Maxine Waters.’

‘Jon Tester showed his true colors with his shameful, dishonest attacks on a great man, a friend of mine, a man that I said: ‘Why don’t you run the VA, you’d be great. Navy Admiral Ronny Jackson,” Trump told the Montana crowd.

Jackson’s nomination blew up in April after a series of reports of alleged misconduct. 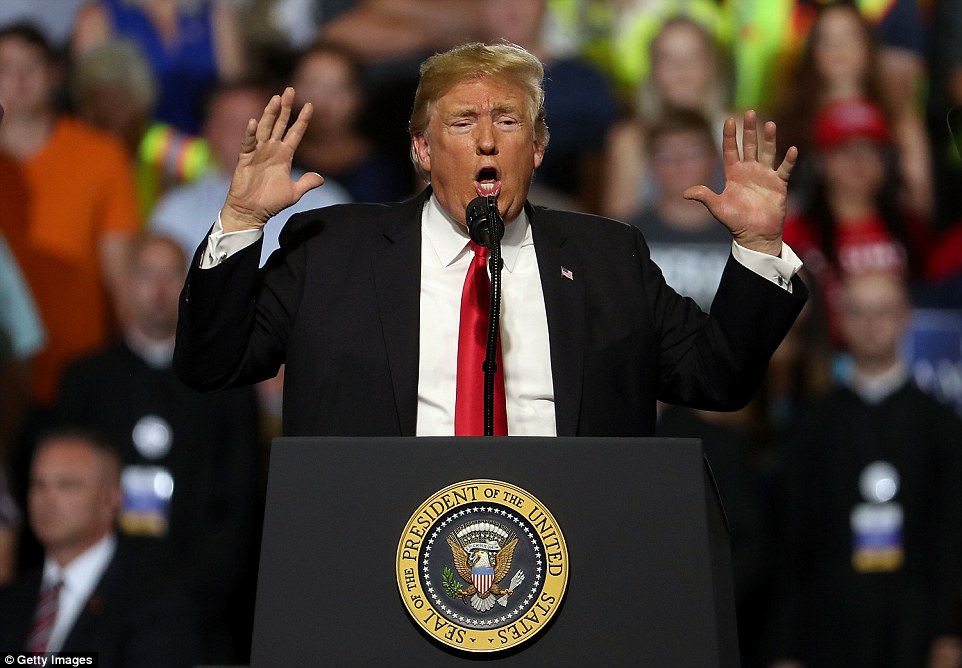 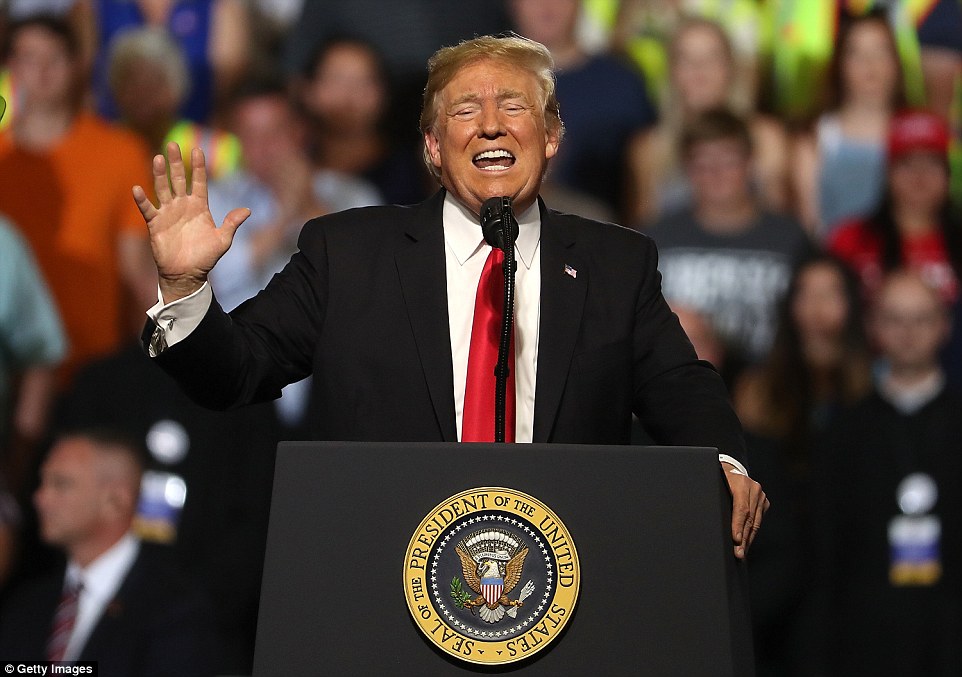 President Donald Trump also went after Montana Sen. Jon Tester, who helped bring down his nominee to run the Department of Veterans Affairs 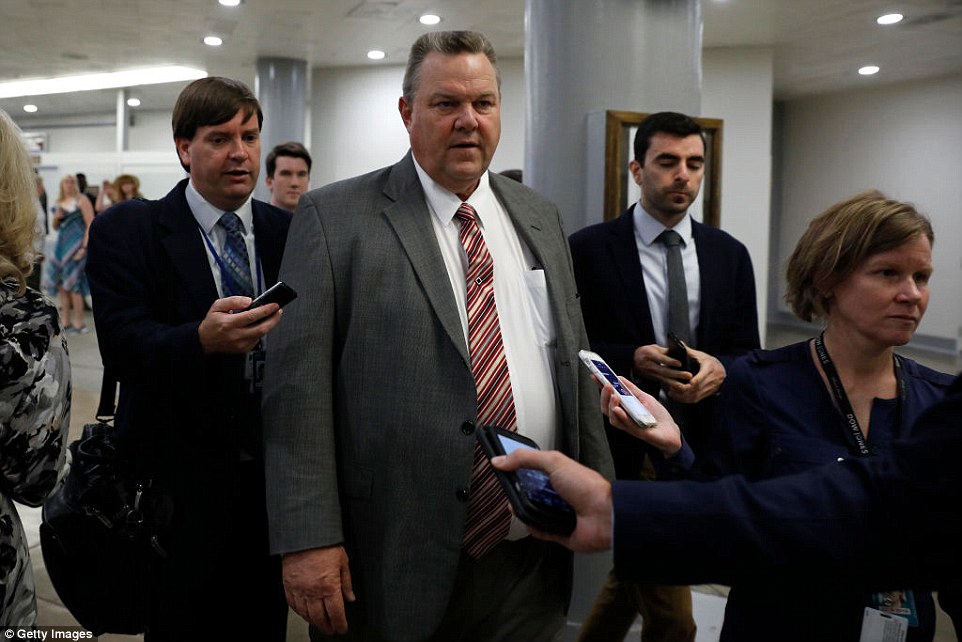 Trump said he ‘probably’ came to Montana to go after Sen. Jon Tester for his role in Jackson’s nomination going down 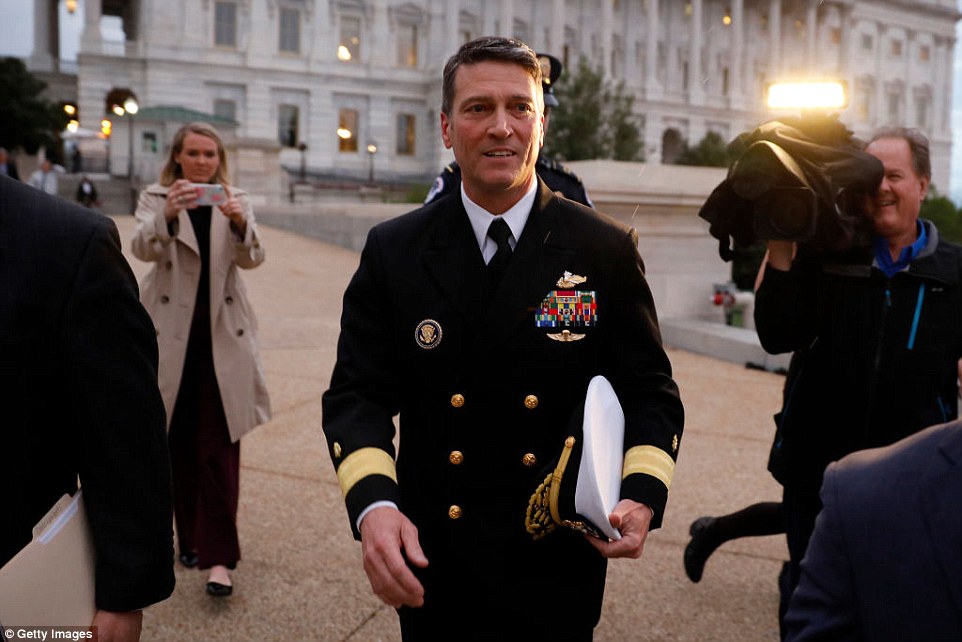 Trump even brought up that Jackson had provided a report on his own health after conducing a physical – in a performance that drew skepticism from ‘girthers’ who noted Jackson’s report showed Trump to be just shy of being technically obese and declared him in ‘excellent’ health.

‘I feel guilty. Admiral Jackson was getting ready to leave service. He served many years admirably. Not a blemish,’ Trump said.

‘He actually said I was healthy. You know? He’s the one,’ Trump said, recalling Jackson’s commanding performance in the White House briefing room describing the president’s health.

‘When the fake news starting saying, ‘Oh why isn’t Trump giving the physical! Why. Dr. Jackson and his staff went out they gave me a physical. That was a physical,’ Trump said, appearing to stress its thoroughness. ‘And when they said I was very healthy the news was devastated … they didn’t want to hear that,’ Trump said.

Trump defended ICE, the immigration service some Democrats now want to dismantle and reconstitute over family separation of immigrants at the border.

‘We protect ICE. They protect us and we protect them,’ Trump said.

He even went after a woman who climbed the Statue of Liberty sporting a ‘resist’ T-shirt, calling her a ‘clown.’

‘You saw that clown yesterday on the Statue of Liberty. You see the guys that went up there. I wouldn’t a done it,’ Trump said, lauding the bravery of responders.a

‘I would have said let’s get some nets and let’s wait ’til she comes down,’ he quipped.