A 16-year-old boy’s Make America Great Again hat was ripped right off his head in a vicious attack while dining at a Texas restaurant.

Hunter Richard was with his friends at a Whataburger in San Antonio when he was suddenly affronted by another diner, later identified as Kino Jimenez, Tuesday evening.

Jimenez allegedly pulled off Richard’s cap off his head, grabbing some of his hair with it, before going off on him.

He then threw Richard’s cup filled with ice and soda at him yelling ‘F*** the President!’ in his filmed attack that has gone viral. 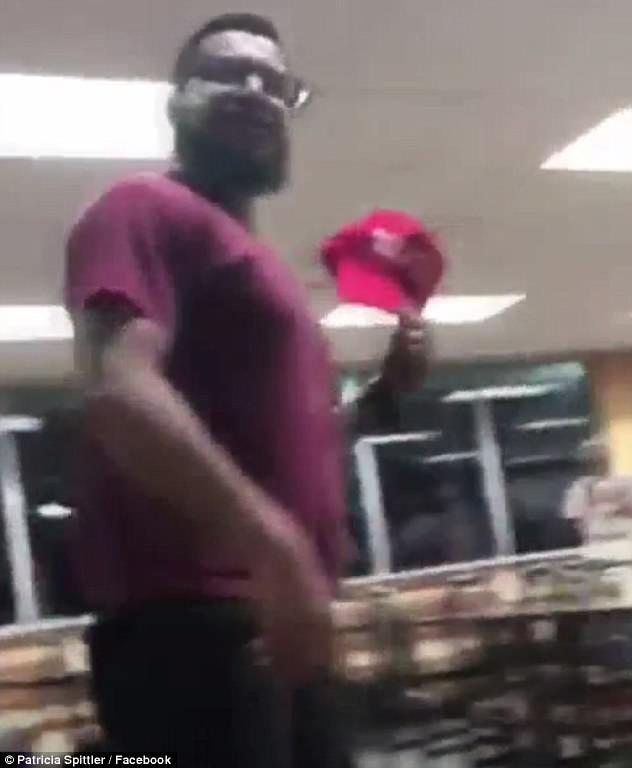 ‘Alright, have fun with it,’ one of the teenagers at the table calls out.

The video displays the utterly appalled reaction of one boy at the table.

The boys said the man attacked them without any provocation.

Richard’s mother Patricia Spittler posted the since deleted video online, where it racked up more than two million views, hoping to identify the perpetrator.

‘Please help ID this “Scum BAG of the Year”! His friend was wearing a Patriotic Hat and this happened! It would be nice to know who he is for someone to let him know his actions are not ok! Real tough guy… approaches a group of teenagers minding their own business just having a burger! He kept his hat too! Scum bag!’ she pleaded.

The man was later identified by San Antonio bar ‘Rumble’ as being a part-time employee, who was immediately terminated following the publication of the video.

The restaurant posted to Facebook saying: ‘It came to our attention earlier this evening that a part-time employee was captured on cell phone video assaulting another person at a local eatery. The assault took place, presumably, because this employee did not agree with the other individuals political stance.’

‘We have since terminated this employee, as his actions go against everything that this establishment stands for. Rumble has, and always will be, a bar that is as inclusive as any establishment could possibly be,’ the post added.

He was named as Kino Jimenez according to Heavy.