Disgraced EPA Boss Scott Pruitt Finally Quits After Months of Scandals, Blaming the ‘Unrelenting Attacks’ on Him and His Family

Embattled EPA Administrator Scott Pruitt finally resigned on Thursday after an onslaught of scandals that led to more than a dozen investigations of his use of staff, VIP travel, and efforts to gain perks and boost his household income.

But in an unexpected culmination to a one of the most remarkable accumulations of scandal in Washington lore, the disgraced cabinet official attributed his joining the Trump administration to divine providence.

‘I believe you are serving as President today because of God’s providence. I believe that same providence brought me into your service,’ Pruitt wrote Trump in his resignation letter as he faced more than a dozen investigations.

In just one of a litany of scandals that swirled around Pruitt, aides say Pruitt asked them to help his wife find a job that would net her a salary that topped $200,000.

But that report was just the latest in a string of reports of efforts to score tickets to top tier events, enjoy cut-rate lodging, fly first-class, meet lobbyists without a public record, blow through Washington D.C. traffic – and maybe even become the next attorney general with authority over the Russia probe. 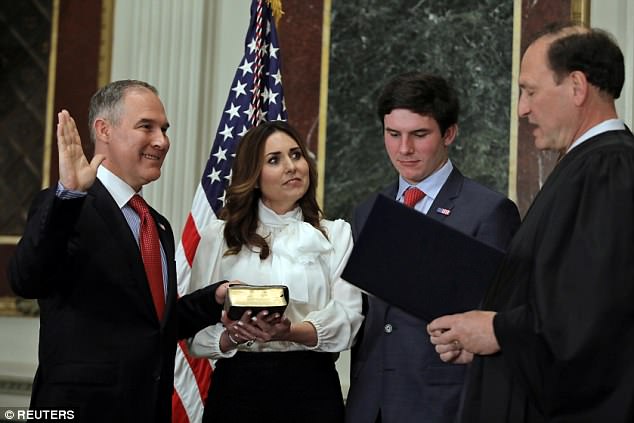 EPA Administrator Scott Pruitt asked aides to help his wife Marilyn find a job that would net her a salary that topped $200,000. She was at his side when he was sworn in by Supreme Court Samuel Alito

President Trump announced the long-expected news on Twitter. He hailed he top official who had caused a flood of humiliating headlines even as he praised Pruitt’s ‘outstanding’ tenure.

He told reporters riding with him on Air Force One on a flight to Montana that it was Pruitt’s decision to resign and that it had been in the works for several days. ‘It was very much up to him,’ Trump said.

‘Scott Pruitt did an outstanding job inside of the EPA. We’ve gotten rid of record breaking regulations and it’s been really good,’ the president stated. ‘You know, obviously the controversies with Scott, but within the agency we were extremely happy.’

Congressional Democrats were probing staff claims he ordered them to falsify his official schedules to shield meetings with industry bigs.

Pruitt’s former chief of staff Kevin Chmielewski – who came to EPA from the Trump campaign – told CNN Pruitt held meetings to ‘scrub, alter or remove from Pruitt’s official calendar numerous records because they might “look bad.”‘

He said close aides kept three different schedules – and one of them containing potentially revealing information was kept secret. He was already facing a dozen-plus scandals at the time.

‘I have accepted the resignation of Scott Pruitt as the Administrator of the Environmental Protection Agency,’ President Trump tweeted on Thursday.

‘Within the Agency Scott has done an outstanding job, and I will always be thankful to him for this. The Senate confirmed Deputy at EPA, Andrew Wheeler, will on Monday assume duties as the acting Administrator of the EPA,’ Trump wrote.

‘I have no doubt that Andy will continue on with our great and lasting EPA agenda. We have made tremendous progress and the future of the EPA is very bright!’ the president concluded.

Pruitt was at the White House for the Fourth of July celebration yesterday, in just the latest instance of him being held closely. 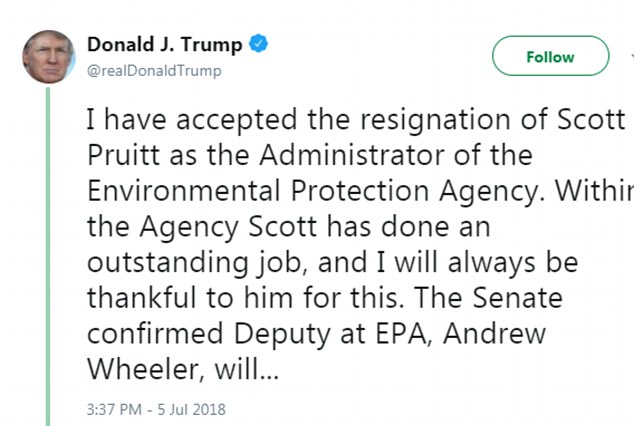 President Trump tweeted that he has ‘accepted the resignation’ of Pruitt

The party invite was a sign of Pruitt’s proximity to Trump, who made not of his attendance in his Independence Day remarks, despite the obvious political cost of keeping a scandal-tarred administrator of a cabinet agency. Others departed following revelations of private jet use alone.

Minutes after Trump confirmed Pruitt’s departure from his Cabinet on Thursday, House Oversight Committee Democrats dropped a transcript with the exact language used by his longtime aide, Samantha Dravis, to describe a 2018 effort by Pruitt to become the nation’s top law-enforcement officer.

The transcript, which came in the form of a letter to the EPA’s inspector general, also contained damning testimony from Pruitt aides on a host of other topics that agency’s IG is said to have been probing.

Rep. Elijah Cummings, the committee’s top Democrat, wrote in an accompanying statement,’Scott Pruitt’s petty grifting and pervasive corruption are known far and wide, but it will take generations to fully reverse the widespread harm he inflicted on our air, our water, and the health of our people.

‘President Trump’s decision to keep Pruitt on far too long—and to lavish praise on him even today for ‘an outstanding job’—is the opposite of draining the swamp,’ he argued. ‘It is a prime example of how the Trump Administration is zealously promoting the interests of oil companies, gas companies, and other industries at the expense of American families.’

Trump continued to claim that Pruitt is a ‘terrific guy’ in a conversation with reporters on his presidential plane on Thursday. He said that Pruitt voluntarily left the administration.

Democrats revealed on Thursday that Pruitt attempted to become attorney general before throwing in the towel at the EPA.

While he may have simply wanted a promotion to the Justice Department in spite the onslaught of headaches he caused the administration, he was also likely cognizant of the Vacancies Act, which allows a Senate-confirmed official to run a cabinet department for a prolonged period should a vacancy occur.

‘He had had conversations with me about media speculation around the possibility that he could become the next Attorney General,’ Dravis testified.

‘It’s my sense that that’s a position that he would be very interested in,’ she told the committee.

It is something Pruitt told her he spoke to the president about.

‘He hinted at that some sort of conversation had taken place between he and the President. But he did not provide me with specifics. I was not present for the conversation. I don’t know what, if anything, was discussed,’ she said.

In the letter released on Thursday minutes after Pruitt’s resignation, Democrats on the House Oversight committee included a partial transcript of testimony from Millian Hupp, the EPA administrator’s former director of advance scheduling, as well.

She revealed that the agency knew about ‘issues’ involving Cardinal George Pell prior to a dinner in Rome with the Vatican official. Pell was charged by Italian police with sexual assault after the trip, and the dinner was scrubbed from Pruitt’s public schedule.

Hupp hinted that an aide to Pruitt mentioned the allegations prior to the dinner, although she claimed not to remember what the concerns were that the aide brought forward to her privately and could not say if he told anyone else. She said it was Pruitt’s chief of staff, Ryan Jackson, who ordered all references to the cardinal to be removed from the schedule after the fact. She said she could not recall whether Jackson provided a reason for the edit.

Jackson in testimony says the dinner that he also attended was left off Pruitt’s public schedule because it was a ‘personal’ and not an ‘official function’ and that no one brought concerns about Pell to him prior to the trip.

‘There was no EPA business there. It was just a gathering of people,’ Jackson said.

Pruitt’s chief of staff also admitted in his testimony that other ‘personal’ meetings would have been left off, too, including ones that may have included lobbyists. Dravis told investigators that she only recalls scheduling one lunch with a lobbyist for Pruitt that was deemed personal, though.

The lunch was with Rick Smotkin, a former Comcast lobbyist who controversially set up a junket in Morocco for Pruitt that he accompanied him on in December. Smotkin won a lobbying contract from the Moroccan government in April that was retroactive to January 1. He registered after the fact as foreign agent in order to represent the African government.

At a cost of $100,000 to the U.S. taxpayer, the trip garnered the attention of the EPA’s inspector general and prompted another investigation. The EPA said that trip was pursuant to an effort to lock in a trade deal with Morocco and the administrator was not aware that Smotkin had such close ties to the foreign government.

For months, negative stories about Pruitt like the Morroco junket, the dinner with the cardinal and jobs the EPA administration tried to obtain for his wife were fed to reporters.

And yet, the president kept him on, commenting to press in early June, ‘Scott Pruitt is doing a great job within the walls of the EPA. ‘I mean, we’re setting records.’

He remarked that Pruitt is ‘being attacked very viciously by the press’ outside of what he’s doing for the EPA.

‘I’m not saying that he’s blameless, but we’ll see what happens,’ Trump said, hinting then that his patience with the official would not be endless.

Pruitt vented about the personal ‘attacks’ on him in his resignation letter:

‘It is extremely difficult for me to cease serving you in this role first because I count it a blessing to be serving you in any capacity, but also, because of the transformative work that is occurring. However, the unrelenting attacks on me personally, my family, are unprecedented and have taken a sizable toll on all of us,’ he wrote.

Pruitt added: ‘I believe you are serving as President today because of God’s providence. I believe that same providence brought me into your service. I pray as I have served you that I have blessed you and enabled you to effectively lead the American people,’ he added.

Dravis, the Environmental Protection Agency’s former associate administrator for the Office of Policy, spoke to Republican and Democratic aides on the House Oversight and Government Reform Committee for several hours on Thursday where she made the allegation about the efforts to land a six-figure job for Pruitt’s wife,The Washington Post reported.

Dravis told the staffers that Pruitt asked her to contact the Republican Attorneys General Association — a group Pruitt had once led and Dravis had worked for before coming to the EPA — as part of the job search for his wife, Marilyn.