Mexicans weary of spiraling violence and corruption voted Sunday in an election pitting a leftist populist promising to oust the ruling elite against rivals who warn that he would lead the country to economic disaster.

Andres Manuel Lopez Obrador, better known as AMLO, has said he will transform Mexico if he wins this his third bid for the presidency, vowing to oust the “mafia of power” he says has looted the country and rule for the poor.

“There is a lot of inequality, a lot of violence in this country,” said Lopez Obrador voter Hugo Carlos, 73. “This situation has to be changed.”

While Lopez Obrador, 64, held a commanding lead in polls, he worried many who fear he could set the country back decades with an interventionist economic policy. 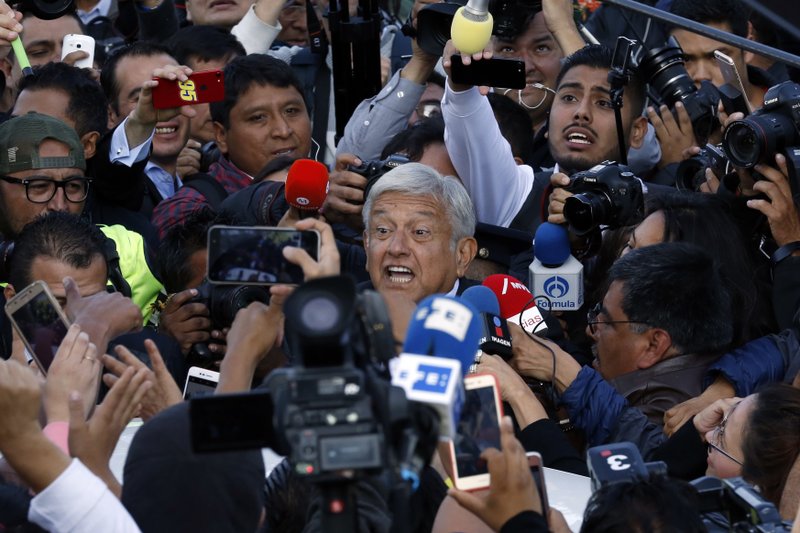 Presidential candidate Andres Manuel Lopez Obrador, of the MORENA party, is surrounded by the press after casting his vote during general elections in Mexico City, Sunday, July 1, 2018. (AP Photo/Marco Ugarte)

“I am concerned that some candidates are making proposals that are impossible, because they’re very expensive to carry out,” said Juan Carlos Limas, 26, who lined up at a Mexico City precinct to vote for Ricardo Anaya, who is running second in polls for a right-left coalition.

Lopez Obrador, who cast his ballot early Sunday, has pledged to give scholarships or paid apprenticeships to youth, and increase support payments for the elderly.

All the candidates are lambasting President Donald Trump’s policies against migrants and Mexico, but voters were wondering who could best deal with Trump. 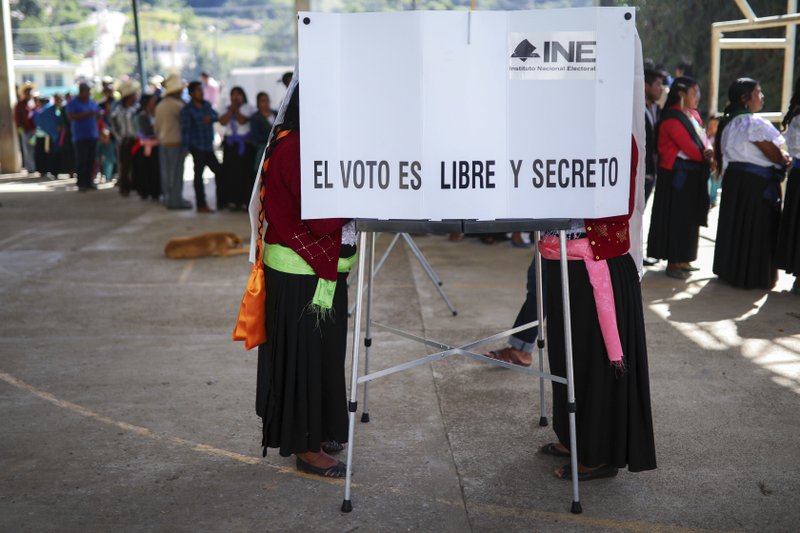 Sunday’s elections for posts at every level of government are Mexico’s largest ever and have become a referendum on corruption, graft and other tricks used to divert taxpayer money to officials’ pockets and empty those of the country’s poor.

Some see this election as Lopez Obrador’s best shot at the presidency after 12 years of near-permanent campaigning.

“The corrupt regime is coming to its end,” Lopez Obrador said at his final campaign event Wednesday. “We represent modernity forged from below.”

Much of the popular ire has been aimed at unpopular President Enrique Pena Nieto’s Institutional Revolutionary Party, whose market-oriented economic reforms have yet to benefit many Mexicans. 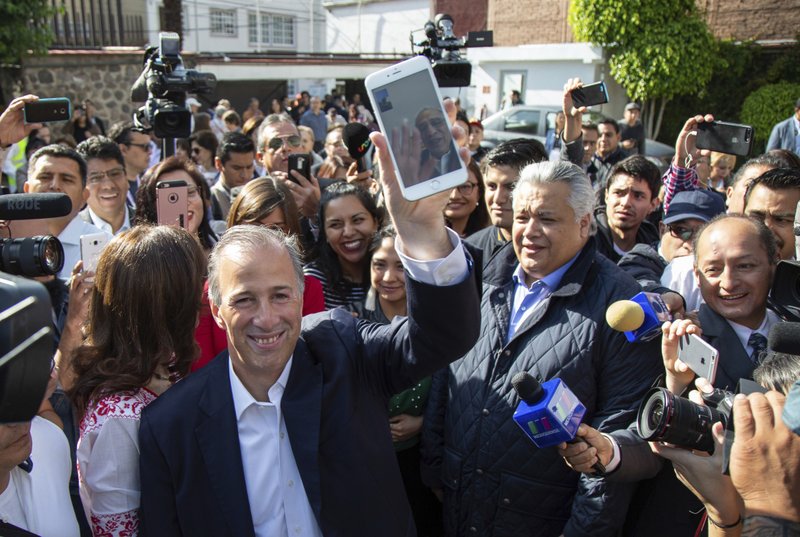 Presidential candidate Jose Antonio Meade, with the Institutional Revolutionary Party (PRI), holds up his cell phone which is connected to a video call with his father who is waving, at a polling station during general elections in Mexico City, Sunday, July 1, 2018. (AP Photo/Anthony Vazquez)

Its candidate, Jose Antonio Meade, has experience in several areas of government — including the treasury and foreign relations departments — and that convinced some voters like Roman Acosta, a doctor from the western city of Morelia.

“Meade is the best person to continue what has worked, and get rid of what hasn’t,” said Acosta.

Anaya has tried to harness the youth vote with an emphasis on technology and new ideas, but he divided his own conservative party to take its candidacy and it’s unclear if his new allies in the leftist Democratic Revolution Party will actually turn out for someone from the other end of the ideological spectrum.

Sunday is the first time that an independent candidate appears on the ballot. 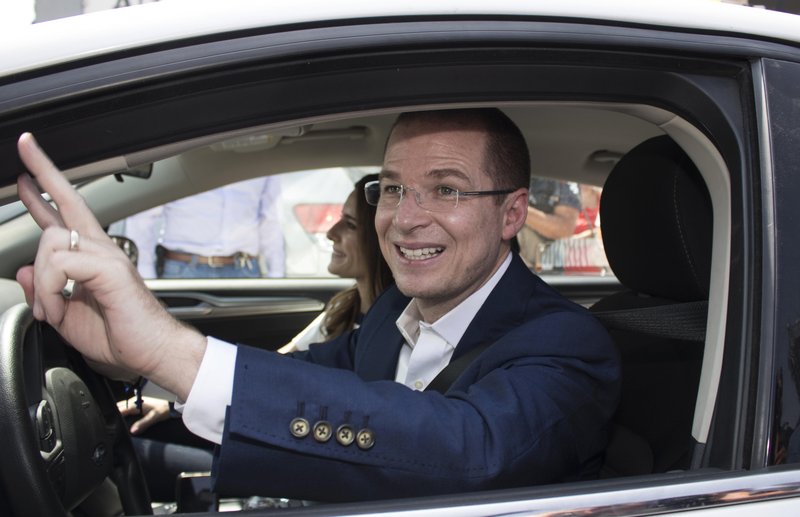 Presidential candidate Ricardo Anaya, of the PAN party, flashes a victory sign as he drives away from a polling station after voting in general elections in Queretaro, Mexico, Sunday, July 1, 2018. (AP Photo/Christian Palma)

Jaime “El Bronco” Rodriguez fought for attention with a horse-mounted “everyman” campaign and by tossing out policy bombs like his proposal to cut off the hands of public officials caught stealing. Without the big party machinery it was an uphill battle.

It is also the first time Mexicans living abroad can vote for down ballot races like senators. More than 181,000 received ballots and the 97,000 that the National Electoral Institute had gotten back by Friday morning were already double what they got in 2012.

Casting his own vote, Pena Nieto promised to work with whoever wins on the transition.

“The president of the republic and his government will be absolutely respectful and support the authorities that are elected,” Pena Nieto told reporters.

Hovering over the election is the specter of vote fraud, though electoral officials deny it is a possibility with the modern balloting technology and institutions now in place. 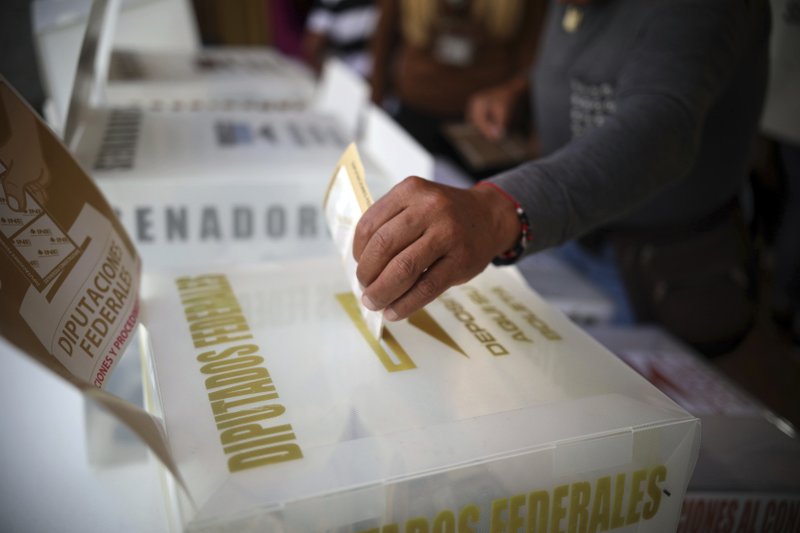 In both of Lopez Obrador’s previous two presidential losses he alleged fraud. In his first loss — by a mere 0.56 percent to conservative Felipe Calderon in 2006 — his supporters held months-long protests in Mexico City and he referred to himself as “the legitimate president.”

His allies are warning even before Sunday’s presidential vote that there better not be any funny business.

“They shouldn’t dare commit a fraud, because if they do they will meet the devil,” said Yeidckol Polevnsky, president of Lopez Obrador’s Morena party. “We will not accept it.”

Still, the voting Sunday was by and large peaceful, apart from the usual complaints about some volunteer-staffed polling places opening late.

The head of the country’s electoral institute, Lorenzo Cordova, said voting was proceeding “peacefully, without major incidents,” and that only four of the 156,807 polling places failed to open. 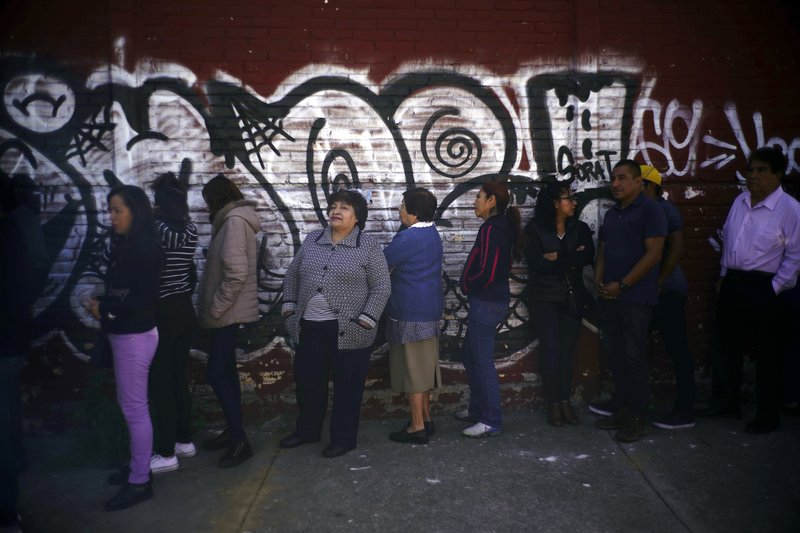 On Saturday, the Democratic Revolution party said four of its members were killed in Mexico State, west of Mexico City, while trying to prevent hand-outs of goods by the ruling party to potential voters.

The government of the northern state of Chihuahua reported that three people were arrested in the border city of Ciudad Juarez for allegedly trying to buy votes for an unnamed political party.

And in Michoacan state, polling places in a few villages were cancelled after some inhabitants said they didn’t want elections involving political parties, which they mistrust. Some ballots were stolen and burned in the town of Nahuatzen to prevent voting. 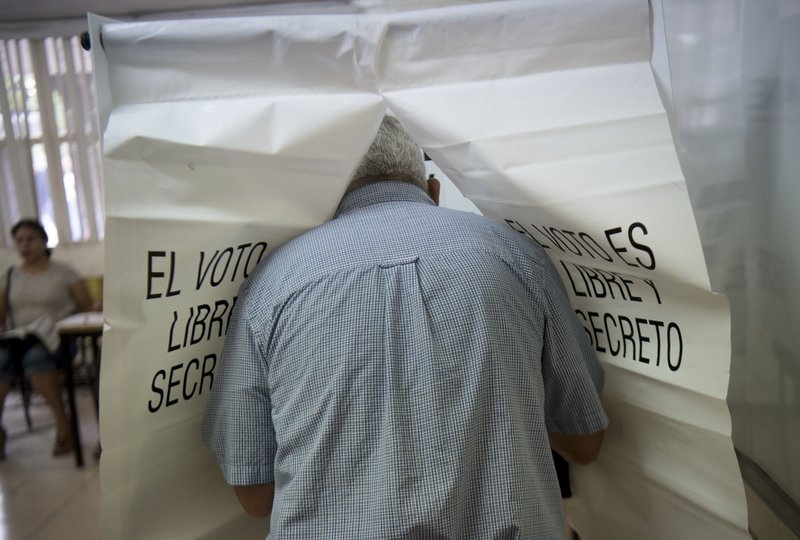 A man casts his vote at a polling station in the border town of Piedras Negras, Mexico, Sunday, July 1, 2018. (AP Photo/Nick Wagner)

The Mexico City government reported isolated problems such as polls opening late, 17 stations that ran out of ballots and the robbery of 583 ballots that were headed to a station in the borough of Iztapalapa.

In the northwestern border city of Tijuana, 29-year-old engineer Jorge Serrano Martinez said he voted for Lopez Obrador because he wanted “to give the opportunity to another political party to do different things.”

“He is not linked to any act of corruption and he has a history as a social fighter,” Serrano said. “I think he is the least corrupt of all and the most honest.”

Associated Press writers Maria Verza and Andrea Rodriguez in Mexico City and Nancy Moya in Tijuana contributed to this report.”