Police Digging for Remains of Up to 7 Michigan Girls

Excavation for the remains of up to seven girls reported missing decades ago has ended for the day in a wooded area northeast of Detroit.

The FBI, Warren police and other agencies spent Tuesday digging through dirt and vegetation at the site in Macomb Township for the remains of 12-year-old Kimberly King and expect to resume their search Wednesday.

“We have probable cause to believe that (Kimberly) is buried there,” said Warren Police Commissioner Bill Dwyer. “We also believe that there’s maybe four to six other girls that have been reported missing that are buried there. We certainly are convinced we have the right area. It’s just a sad type of situation.”

Dwyer did not give the names of the other missing girls.

The search for King’s remains started Monday about 30 miles (50 kilometers) from downtown Detroit.

It came after police interviewed a man serving life in prison for the slaying of 13-year-old girl who disappeared in 1986 and whose remains were found in 2008 near the wooded area targeted for this week’s search.

Cindy Zarzycki was last seen after being lured to a Dairy Queen in Eastpointe, just north of Detroit. 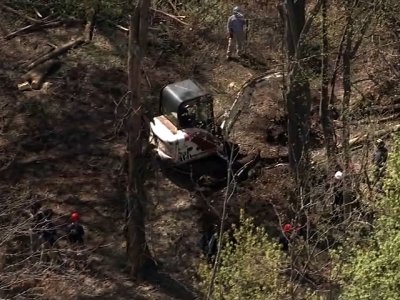 Authorities are excavating woods in southeastern Michigan for the remains of a 12-year-old girl last seen in 1979 also could be looking for the bodies of up to half a dozen others who have been reported missing over the years. (May 8)

Arthur Ream was convicted of first-degree murder in her slaying. He was temporarily released from prison in 2008 to lead police to Zarzycki’s body. He told investigators that Zarzycki’s body was buried near a creek. He also drew a map of the site and spent about an hour at the search scene with authorities before being returned to prison.

Zarzycki had been dating Ream’s son at the time of her disappearance. Authorities said Ream, now 68, tricked her by telling her that he was planning a surprise party for his son.

At the time of his conviction for Zarzycki’s killing, he already was serving a 15-year sentence on an unrelated molestation charge involving a 14-year-old girl.