Tensions Simmer in Mexico as Asylum Seekers Wait at Border

Tension between the Mexican government and Central American asylum seekers simmered Wednesday as men, women and children camped in a large plaza for a fourth straight day waiting for U.S. inspectors to process their claims.

U.S. Customs and Border Protection had accepted 28 caravan members for processing at San Diego’s San Ysidro crossing by late Tuesday, leaving about 100 to wait at the Mexican entrance under tarps tied to waist-high metal gates to shield them from sporadic rain.

Another 20 or so caravan members were allowed to cross a long bridge to a waiting area just outside a building with U.S. inspection booths, also protected by tarps.

Mexico’s National Human Rights Commission and Baja California state agencies said in a joint statement that their priorities were guaranteeing the safety of pregnant women and children and maintaining order, while respecting caravan members’ right to protest.

Mexican officials sent doctors and nurses to the encampment on Wednesday for medical exams and to dispense medicine to people suffering respiratory problems and stomach pains. 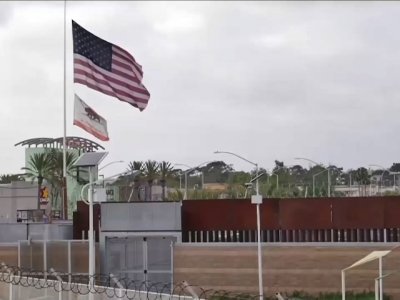 A small group of migrants seeking asylum have been allowed to cross from Mexico to the U.S. under the watchful eye of U.S. border officials. They’re part of a larger group hoping for refuge in the U.S. after a long journey from Central America. (May 1)

Caravan organizers said decisions on where to sleep rested with the asylum-seekers.

“Our job is to give them information as accurately as we can. At the end, they make their decision and we support them.” said Roberto Corona, a leader of Pueblo Sin Fronteras.

Customs and Border Protection has said there was an uptick in Mexican asylum seekers in the week before Central Americans arrived, and Mexicans continued to congregate outside the inspection facility this week to wait their turn.

Mexican officials have gone to lengths to accommodate caravan members during their monthlong journey, allowing them to traverse the country and sometimes travel under police escort.