About 200 people in a caravan of Central American asylum seekers waited on the Mexican border with San Diego for a second straight day on Monday to turn themselves in to U.S. border inspectors, who said the nation’s busiest crossing facility did not have enough space to accommodate them.

After a monthlong journey across Mexico under the Trump administration’s watchful eye, the asylum seekers faced an unexpected twist Sunday when U.S. Customs and Border Protection Commissioner Kevin McAleenan said San Diego’s San Ysidro border crossing facility had “reached capacity.” The agency said in a statement on Monday that it had no estimate when the location would accept new asylum application cases.

About 50 people, many of them women and children, camped overnight on blankets and backpacks in Tijuana outside the Mexican entrance to the border crossing. The crowd grew Monday, assembled behind metal gates that Mexican authorities erected to avoid impeding the flow of others going to the United States for work, school and recreation.

Another 50 asylum seekers were allowed past a gate controlled by Mexican officials Sunday to cross a long bridge but were stopped at the entrance to the U.S. inspection facility at the other end. They waited outside the building, technically on Mexican soil, without word of when U.S. officials would let them try to claim asylum. 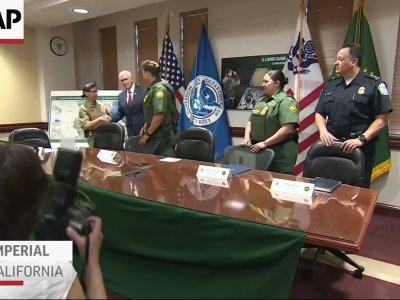 Following the arrival of a caravan of Central American asylum seekers at the U.S.-Mexico border, Vice President Mike Pence made a trip to a U.S. border patrol station in California, stressing the administration’s commitment to border security. (April 30)

Irineo Mujica, a caravan organizer, said asylum-seekers who crossed the bridge remained in a waiting area on Mexican soil Monday. He alleged that U.S. authorities were refusing entry in an effort to dissuade people from trying.

“When they say they reached capacity, it’s just nonsense from (U.S. authorities) so they can abandon, not attend to, and evade their responsibilities in asylum cases,” said Mujica, of the advocacy group Pueblos Sin Fronteras.

Customs and Border Protection said Sunday that it will resume asylum processing at the San Diego crossing when it has more space and resources.

The San Ysidro border inspection facility that divides San Diego from Tijuana can hold about 300 people, meaning the bottleneck may be short-lived. The agency processed about 8,000 asylum cases from October through February at the crossing, or about 50 a day.

President Donald Trump has repeatedly criticized the caravan since it started in Mexico on March 25 near the Guatemala border and headed north to Tijuana, telling campaign supporters in an email last week that it had to be stopped.

His broadsides came as his administration vowed to end what officials call “legal loopholes” and “catch-and-release” policies that allow people requesting asylum to be released from custody into the U.S. while their claims make their way through the courts, which can take years.

“Catch and release is ridiculous,” Trump said Monday at a news conference with Nigerian President Muhammadu Buhari at the White House. “If they touch our property, if they touch our country, essentially you catch them and you release them into our country. That’s not acceptable to anybody.”

Attorney General Jeff Sessions has called the caravan “a deliberate attempt to undermine our laws and overwhelm our system.” Homeland Security Secretary Kirstjen Nielsen said asylum claims will be resolved “efficiently and expeditiously” and warned that anyone making false claims could be prosecuted and said asylum seekers should seek protection in the first safe country they reach, including Mexico.

Asylum seekers did not appear to be thrown off by the delay.

Elin Orellana, a 23-year-old pregnant woman from El Salvador, said she is fleeing the MS-13 street gang, a favorite target of both Sessions and Trump because of their brutal killings committed in the United States.

She said her older sister had been killed by the gang in El Salvador, so she is attempting to join other family members in the Kansas City area.

“Fighting on is worth it,” she said Sunday as she camped outside the Mexican entry to the border crossing.

Associated Press writers Gerardo Carrillo in Tijuana and Jill Colvin in Washington contributed to this report.