The mentally unstable gunman suspected of killing four people in a late-night shooting at a Waffle House restaurant was arrested near his apartment Monday after hiding from police for more than a day, authorities said.

Police and federal agents had mounted a massive manhunt for 29-year-old Travis Reinking after the Sunday morning attacks, in which a gunman clad only in a jacket used an assault rifle to attack a diverse crowd of patrons at the restaurant before being disarmed by a patron.

Construction workers told officers Monday that a person matching Reinking’s description walked into the woods near a construction site, Lt. Carlos Lara told reporters. A detective spotted Reinking, who lay down on the ground to be handcuffed when confronted, Lara said

Reinking carried a black backpack with a silver semi-automatic weapon and .45-caliber ammunition, Lara said. Detectives cut the backpack off him.

Police spokesman Don Aaron said Reinking requested a lawyer and was taken to a hospital before he would be booked on four counts of criminal homicide. 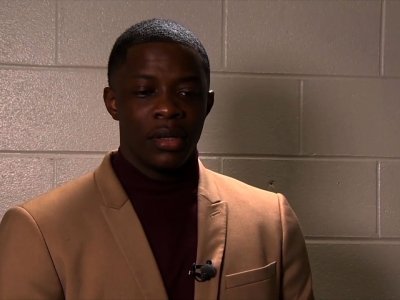 James Shaw, Jr. says he didn’t mean to be a hero when he wrestled a gun away from the Nashville Waffle House shooting suspect early Sunday. Police say Shaw, who was wounded, saved lives. (April 23)

Police said Reinking opened fire in the restaurant parking lot before storming the restaurant, which had about 20 people inside. Four people — three of them black and one Hispanic — were killed and four others injured before a customer wrestled the weapon away and Reinking, who is white, ran out, police said.

Police said Reinking stole a BMW days before the attack. The car was quickly recovered, but authorities did not immediately link the theft to Reinking.

In May 2016, Reinking told deputies from Tazewell County, Illinois, that music superstar Taylor Swift was stalking him and hacking his phone, and that his family was also involved.

Reinking agreed to go to a local hospital for an evaluation after repeatedly resisting the request, the sheriff’s report said.

Another sheriff’s report said Reinking barged into a community pool in Tremont, Illinois, last June, and jumped into the water wearing a pink woman’s coat over his underwear. Investigators believed he had an AR-15 rifle in his car trunk, but it was never displayed. No charges were filed.

Last July, Reinking was arrested by the U.S. Secret Service after he entered a restricted area near the White House and refused to leave, saying he wanted to meet President Donald Trump. Reinking was not armed, but at the FBI’s request, Illinois police revoked his state firearms card and seized four guns from him, authorities said.

The AR-15 used in the shootings was among those seized. 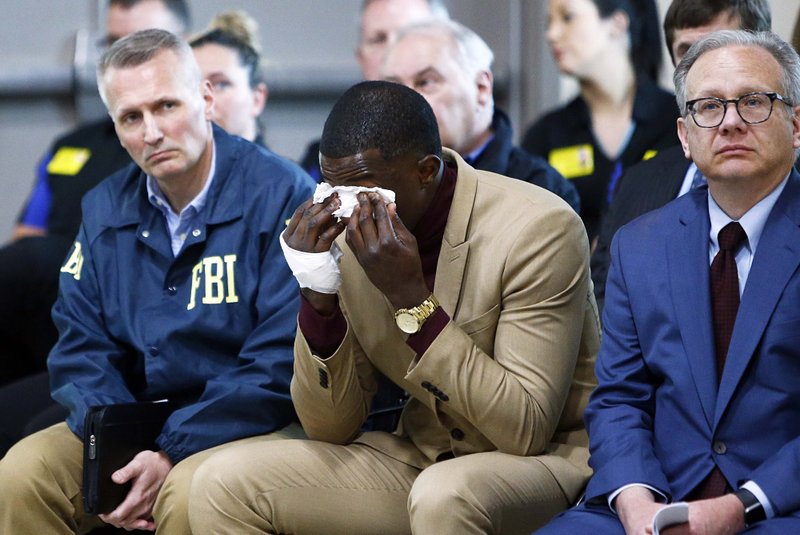 Hero James Shaw wipes tears away during a press conference.

In August, Reinking told police he wanted to file a report about 20 to 30 people tapping into his computer and phone and people “barking like dogs” outside his residence, according to a report.

“There’s certainly evidence that there’s some sort of mental health issues involved,” Tazewell County Sheriff Robert Huston said. But he said deputies returned the guns to Reinking’s father on the promise he would “keep the weapons secure and out of the possession of Travis.”

Reinking’s father “has now acknowledged giving them back” to his son, Aaron said. 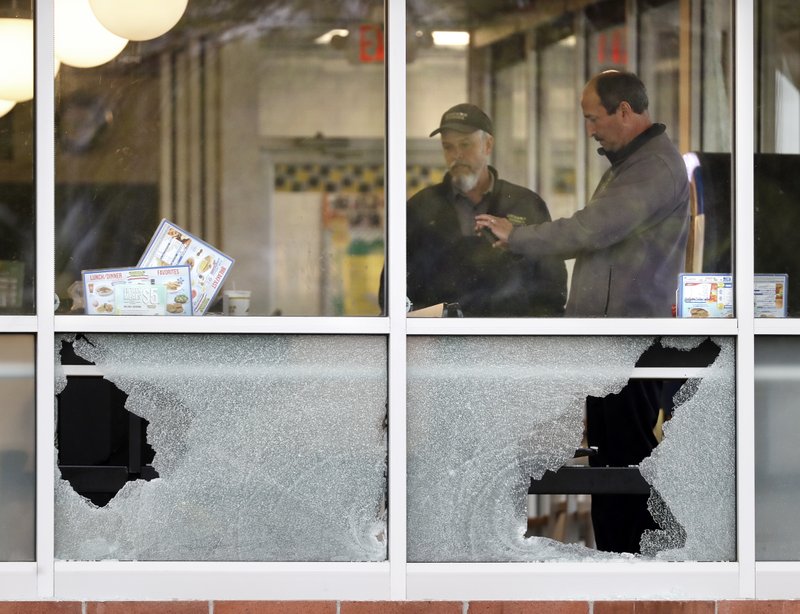 People look over an area near a window shot out at a Waffle House restaurant Sunday, April 22, 2018, in Nashville, Tenn. Several people died after a gunman opened fire at the restaurant early Sunday. (AP Photo/Mark Humphrey)

Phone calls to a number listed for the father, Jeffrey Reinking, went unanswered.

It is not clear why Reinking moved recently from Morton, Illinois, and if it had anything to do with being near Swift, who has a home in Nashville. Police say he worked in construction for a while. 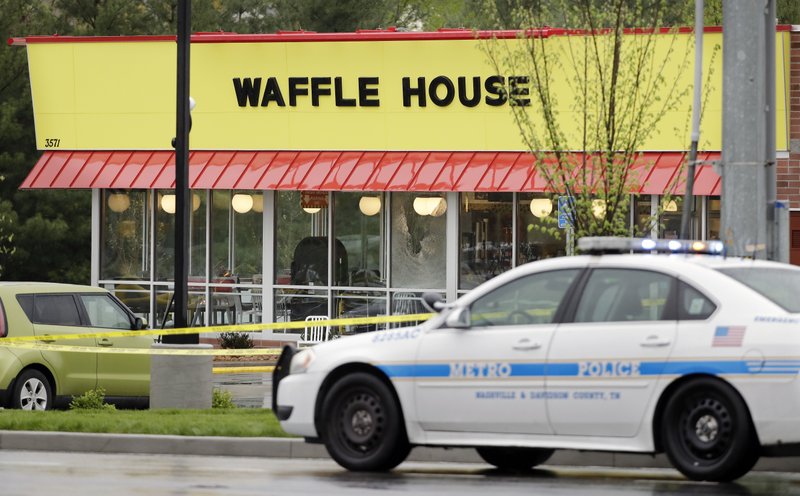 Police say Reinking drove into the Waffle House parking lot in his gold Chevy Silverado pickup early Sunday and sat there for about four minutes before opening fire.

The victims fatally shot in the parking lot have been identified as Taurean Sanderlin, 29, of Goodlettsville, and Joe Perez, 20, of Nashville. Sanderlin was an employee at the restaurant.

One of the fatally wounded inside was DeEbony Groves, a 21-year-old student at Nashville’s Belmont University. She was remembered as an exceptional student who made the Dean’s list, and a tenacious basketball player. 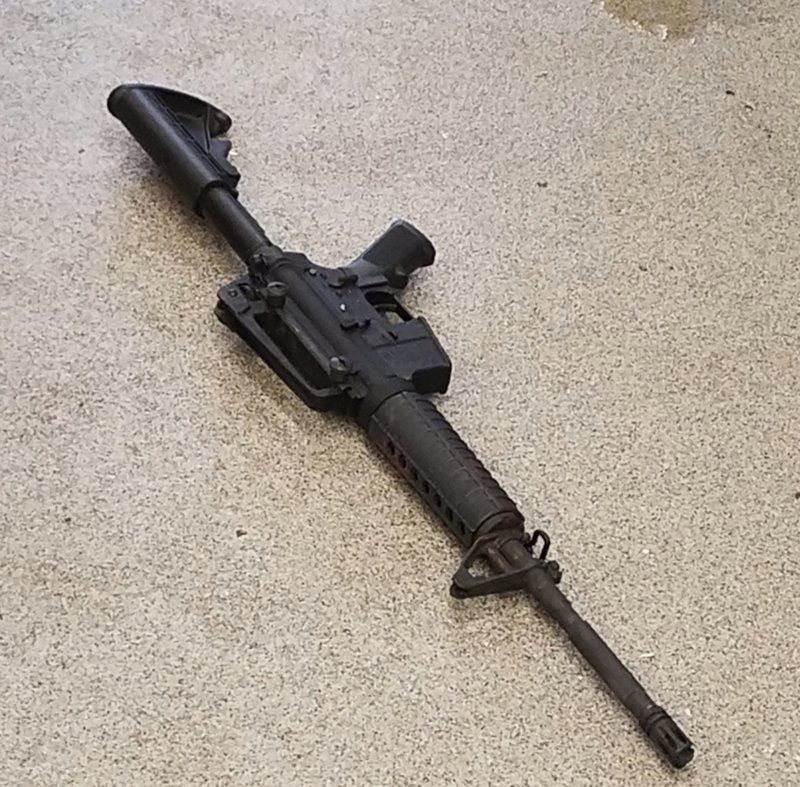 This photo provided by the Metro Nashville Police Department photo shows the rifle used in the deadly shooting.

Akilah Dasilva was also killed inside the restaurant. The 23-year-old from Antioch was a rap artist and music video producer.

He was at the restaurant with his girlfriend, 21-year-old Tia Waggoner, the paper reported. Waggoner was wounded and underwent surgery to try to save her leg, Dasilva’s family said. Police say Sharita Henderson, 24, of Antioch, was wounded and being treated as well.

Also wounded was James Shaw Jr., a 29-year-old restaurant patron who burned his hand grabbing the hot muzzle of the assault weapon as he wrestled the gun away. A Nashville native who works as a wireless technician for AT&T, Shaw said he was no hero — despite being hailed as one by Nashville Mayor David Briley.