As thousands of National Guard troops deploy to the Mexico border, U.S. Attorney General Jeff Sessions brought his tough stance on immigration enforcement to New Mexico on Wednesday, telling border sheriffs that cracking down on illegal crossings and drug smuggling is necessary to build a lawful immigration system.

Sessions ticked off stories about smugglers being caught with opioids and cocaine at the U.S.-Mexico border and legal loopholes that have encouraged more immigrants to make the journey.

“This is not acceptable. It cannot continue,” he said. “No one can defend the way the system is working today.”

Outside the meeting, dozens of immigrant rights activists protested, once again rejecting Sessions’ previous characterization of the border region as “ground zero” in the Trump administration’s fight against cartels and human traffickers.

They chanted in Spanish, saying the region is not a “war zone,” and hoisted signs that protested the proposed border wall and the deployment of National Guard troops to the region. 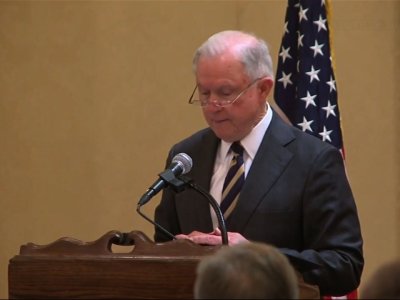 The departments patrol areas located within 25 miles (40 kilometers) of the border.

Sessions’ trip to Las Cruces, a small city about an hour north of the border, comes as construction begins nearby on 20 miles (32 kilometers) of steel fencing that officials say is part of Trump’s promised wall.

U.S. Customs and Border Protection officials say the heightened barrier will be harder to get over, under and through than the old post and rail barriers that line the stretch of sprawling desert west of the Santa Teresa border crossing.

“The lack of a wall on the southern border is an open invitation to illegal crossings,” Sessions said.

Dona Ana County Sheriff Enrique “Kiki” Vigil, whose jurisdiction includes Las Cruces and Santa Teresa, doubted that a wall is an appropriate use of resources to combat the flow of drugs in the area — one of the busiest sectors of the U.S.-Mexico border.

Vigil said he would prefer to see any additional potential spending on a border wall instead go toward acquiring more technology and filling other needs of law enforcement on the border.

“Just the building of the wall, that’s going to be a humongous price,” he said. “Why not use some of that money to try to address some of the issues here in the counties?”

Citing a crisis on the border, Sessions has issued an order directing federal prosecutors to put more emphasis on charging people with illegal entry.

He took another swipe Wednesday at sanctuary cities, telling the sheriffs that it’s “illogical and insane” that a person can enter the country illegally on Monday and make their way to San Francisco by Wednesday and not be deported.

Sessions said the crisis has been allowed to fester for decades while politicians made promised but did nothing to fix the system.

It was still far lower, however, than the surges during the last years of the Obama administration and prior decades.

The attorney general’s “zero-tolerance” involving border crossings calls for prosecuting people who are caught illegally entering the United States for the first time.

He told the sheriffs that it would help end a practice of “catch and release” at the border, drawing applause from some in the audience. Yuma County Sheriff Leon Wilmot, of Arizona, was among those who supported the “zero-tolerance directive.”

“When they would catch backpackers, for instance, they were seizing the dope and cutting them loose,” Wilmot said. “The criminal element is going to exploit that.”