The police officer who was with a Minneapolis officer charged with murder and manslaughter in the death of an unarmed Australian woman said both men “got spooked” when she approached their SUV, and that the partner feared for his life. But prosecutors say Officer Mohamed Noor acted recklessly and was not justified in using deadly force when he shot Justine Ruszczyk Damond last July after she called to report a possible sexual assault behind her home.

The case, which has drawn international attention, presents challenges for both sides. If it goes to a trial, a jury must decide if Noor acted reasonably in the moment. Here’s a look at likely arguments and pitfalls as the case unfolds.

Damond, a 40-year-old life coach who was engaged to be married, called 911 on the night of July 15 to report a possible sexual assault in the alley behind her home.

Noor responded with his partner that night, Officer Matthew Harrity, who was driving. Finding nothing, the officers were about to leave when Harrity heard a voice and a thump on the back of the squad car, and glimpsed a person’s head and shoulders outside his window. 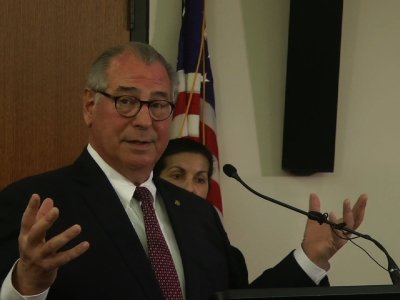 Prosecutors have charged a Minneapolis police officer who shot and killed an unarmed Australian woman in July minutes after she called 911 to report a possible sexual assault behind her home. (March 20)

He said he was startled, thought his life was in danger, drew his gun and held it by his ribcage, pointing downward, the complaint said. Harrity then heard a sound like a light bulb breaking, saw a flash and looked to his right to see Noor with his arm extended. He didn’t see Noor’s gun. He then looked out his window and saw Damond with a gunshot wound on the left side of her abdomen. Damond put her hands on the wound and said “I’m dying” or “I’m dead.”

“We both got spooked,” Harrity told his sergeant, according to the complaint.

The officers did not turn on their body cameras until after the shooting. There was no squad camera video.

Noor was charged Tuesday with third-degree murder and second-degree manslaughter. He made his first court appearance Wednesday.

PROBLEMS FOR THE DEFENSE

In announcing the charges Tuesday, Hennepin County Attorney Mike Freeman said Noor acted recklessly with disregard for human life. He said in the seconds between Damond approaching the squad car and Noor firing “there is no evidence that Officer Noor encountered a threat, appreciated a threat, investigated a threat or confirmed a threat that justified his decision to use deadly force.”

According to Freeman, Harrity said he couldn’t see whether Damond was a man or woman, adult or child, and he saw no weapons. Harrity was more experienced, closer to Damond and took his own gun out — but didn’t shoot. That could all buttress the argument that Noor acted recklessly when he reached across Harrity from the passenger seat to fire at Damond.

While Harrity acknowledged being scared, the prosecution will likely argue that whatever threat the officers thought they faced was already over by the time Damond approached them, said Marsh Halberg, a defense attorney and former prosecutor who’s not involved in the case.

“All you have at that point is a bump on the door or a noise. … You shouldn’t shoot into the dark based on that alone,” he said.

Under state law, police officers can use deadly force to protect themselves or their partners from death or great bodily harm — and Harrity allegedly told investigators that both men were scared. Halberg said he expects the defense’s main argument will be that “hindsight is 20/20. It’s easy to sit here now and dissect this but you have to look at it through the eyes of the officer and what he was thinking.”

Another problem for prosecutors could be Freeman’s own comments. He was captured on video at a holiday reception in December complaining that investigators hadn’t brought him enough evidence to charge Noor. He then convened a grand jury to help him investigate the case because, he said, several officers weren’t cooperating.

Noor’s attorney, Thomas Plunkett, said in a statement Tuesday that it appears Freeman contemplated the charges before asking for a grand jury’s help. Plunkett went on to say: “The facts will show that Officer Noor acted as he has been trained and consistent with established departmental policy.”

Joe Friedberg, another defense attorney not involved in the case, said there’s “virtually no probability of a conviction” on the third-degree murder charge because Noor’s actions don’t’ meet the legal definition for it. He expects the judge will dismiss that count. He said even the second-degree manslaughter charge looks like a “toss-up.”

Freeman acknowledged that convicting a police officer in a fatal shooting is a challenge.

According to Philip Stinson, a criminologist at Bowling Green State University in Ohio who tracks fatal police shootings, 85 police officers have been charged with murder or manslaughter resulting from on-duty shootings since 2005. To date, 32 officers have been convicted of a crime, often for a lesser offense. Forty-one have been acquitted and 12 cases are still pending.

“It’s difficult to get a conviction in these cases,” Stinson said. He added that as soon as an officer testifies at trial that they feared for their life, juries tend to ignore the legal requirements of what an “objectively reasonable” officer would do, and they take that officer’s testimony at face value.

“Juries and judges in bench trials are very reluctant to second guess the split-second, life-and-death decisions of police officers in potentially violent street encounters,” he said.

Friedberg, Halberg and Earl Gray, another defense attorney not involved in the case, all agreed that prosecutors hope to use the more serious murder charge, with its higher presumptive sentence of 12½ years, as leverage to get Noor to plead guilty to the lesser manslaughter count. Halberg also said letting jurors reject the murder charge could make it easier for them to convict Noor of manslaughter, which carries a presumptive sentence of four years.