The family of the man suspected of planting the bombs this month that killed two people and injured four others in the Texas capital expressed shock, saying they don’t know what could have motivated him.

Authorities say Conditt blew himself up in a motel parking lot overnight as a SWAT team approached his SUV.

Conditt grew up in Pflugerville, a suburb just northeast of Austin where he was still living after moving out of his parents’ home. It’s not far from the site of the first of the four package bombings — a March 2 explosion that killed a 39-year-old man, Anthony House — though it’s unknown if Conditt knew any of the victims and authorities said the motive for the attacks remained unclear.

Conditt’s family said in a statement that they were “devastated and broken” at the news of his involvement. In the statement, the family expressed shock and grief, and offered “prayers for those families who have lost loved ones … and for the soul of our Mark.” 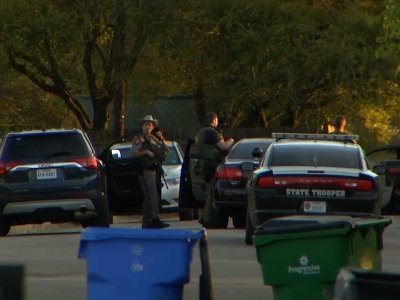 Police are investigating the home of the Austin bombings suspect and the FedEx location one of the explosives is thought to have originated from. Agents are using a robot to help detect and diffuse and bombs located inside the house. (March 21)

Courtney, who said Conditt had visited his Lakewood, Colorado, home over Christmas, told The Associated Press he doesn’t “know that anybody saw this coming.” He described his nephew as a smart, intelligent and kind “computer geek.”

“I don’t know what happened, what snapped. I have no idea. Everybody wants and we want answers,” Courtney said.

The family’s statement said they had “no idea of the darkness that Mark must have been in.”

Conditt was the oldest of four children and all of them were home-schooled. Courtney said Conditt’s parents are both electrical engineers.

Authorities released few details about the suspect, aside from his age, that he was white and that he was apparently unemployed. He attended Austin Community College from 2010 to 2012 and was a business administration major, but he did not graduate, according to a college spokeswoman. He worked for a time at an area manufacturing company and Gov. Greg Abbott told KXAN-TV in Austin that Conditt had no criminal record.

Conditt left little discernable trace on social media. Aside from a few photos of him on his family’s Facebook pages, he apparently made six entries on a personal blog in 2012 in which he addressed a range of topics. In those posts, a blogger identifying himself as Mark Conditt of Pflugerville wrote that gay marriage should be illegal. He also called for the elimination of sex offender registries and argued in favor of the death penalty. He described his interests as cycling, tennis and listening to music.

Of gay marriage, Conditt wrote: “Homosexuality is not natural. Just look at the male and female bodies. They are obviously designed to couple.”

A friend of Conditt described him as smart, opinionated and often intimidating. Jeremiah Jensen, 24, told the Austin American-Statesman that he was close to Conditt in 2012 and 2013. Jensen said they were both home-schooled in the same Pflugerville community and he would often go to the Conditt home for lunch after church on Sundays and they attended Bible study and other activities together.

“I have no idea what caused him to make those bombs,” Jensen told the newspaper .

He said Conditt came from a good family, was athletic and was a “deep thinker.”

“When I met Mark, he was really rough around the edges,” Jensen said. “He was a very assertive person and would . end up being kind of dominant and intimidating in conversation. A lot of people didn’t understand him and where he was coming from. He really just wanted to tell the truth. What I remember about him he would push back on you if you said something without thinking about it. He loved to think and argue and turn things over and figure out what was really going on.”

Jeff Reeb, a neighbor of Conditt’s parents in Pflugerville for about 17 years, said he watched Conditt grow up and that he always seemed “smart” and “polite.”

Reeb, 75, said Conditt and his grandson played together into middle school and that Conditt regularly visited his parents, whom Reeb described as good neighbors.

Conditt was living with roommates a few miles from his parents’ home and was in the process of gutting his home, Reeb said. Conditt’s father, whom Reeb referred to as Pat, worked as an Amway distributor and also bought electronics on the side to resell, Reeb said.

Michael McCaul, a Republican congressman, told The Associated Press on Wednesday that the suspect matched the FBI’s initial profile suspicion that the bomber was likely a white male. But he said a psychological profile probably won’t be known until investigators go through Conditt’s writings and social media postings.