A relatively high bond was imposed Wednesday in a case involving a student who brought a knife to Marjory Stoneman Douglas High School, one day after the same judge set a $500,000 bond for the brother of the shooting suspect for trespassing at the school.

Broward County Judge Kim Theresa Mollica ordered 18-year-old Jordan Salter held on $12,500 bond after she brought a knife with a 2-inch (5-centimeter) blade to the school. Authorities arrested her after a confrontation with another student Tuesday in the school cafeteria.

The SunSentinel reports that Salter attorney Brian Reidy called the high bond “out of control” and “ridiculous” at a hearing and blamed it on fear from last month’s school shooting that killed 17 people.

“I don’t know when we all hit the fear button when everything is such an absolute emergency,” Reidy told the judge. 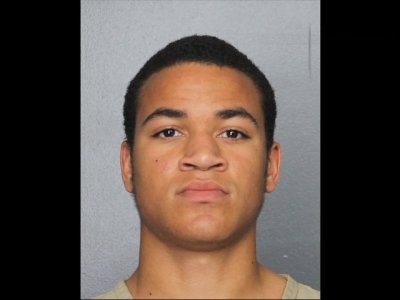 A judge set an unusually high $500,000 bond on Tuesday and imposed a host of other restrictions for the brother of the Florida school shooting suspect, who was charged with trespassing at Marjory Stoneman Douglas High School.(March 20)

Broward County Superintendent Robert Runcie sent a letter to families Wednesday outlining security measures that include students having to use clear backpacks provided by the district.

Runcie’s letter says every public school in the county will be reduced to a single entry for visitors by the start of 2019. Runcie also noted that the county would receive $8.5 million from the state to post at least one school resource officer in every school and $6 million to expand mental health services next school year.

Meanwhile, Florida residents won’t get a chance to vote this fall on adding gun control restrictions to the state constitution. A state panel on Wednesday rejected several proposed restrictions on procedural grounds. A majority of the Florida Constitution Revision Commission voted that the gun control measures were out of order and couldn’t be considered under commission rules.

Elsewhere, several media organizations including The Associated Press asked a judge to determine if additional surveillance video from the school shooting should be released. Last week, the Broward Sheriff’s Office released a 27-minute video depicting ex-deputy Scot Peterson’s actions remaining outside the building where the shooting took place.

Trespassing is a misdemeanor that usually involves only a $25 bond. But Judge Mollica agreed with prosecutors that Zachary Cruz had been warned not to visit the school and that the enormity of the Valentine’s Day massacre warranted a much higher bond for him to gain his release.

“Weeks after his brother murdered, injured and terrorized at the school, (Zachary) was there,” said Assistant State Attorney Sarahnell Murphy at a hearing Tuesday. “Many (parents) kept their children home today. They have again been terrorized.”

Broward Sheriff’s Office deputies arrested Zachary Cruz on Monday afternoon, saying he rode his skateboard onto the campus where 19-year-old Nikolas Cruz is accused of carrying out the shooting Feb. 14.

Joseph Kimok, who is representing Zachary Cruz, said the bond and conditions were far out of proportion to the trespassing offense.

“He is being held for who he is related to, not for anything he did,” Kimok said.

According to an arrest report, Zachary Cruz told officers he came to the school to “reflect on the school shooting and soak it all in.” He did not resist arrest and the report made no mention of any weapons.

“He has all the same flags present as his brother,” she said.

Mollica also ordered Zachary Cruz to wear an ankle monitor and stay away from schools — particularly Stoneman Douglas High — if he is released. She approved a search for weapons and ammunition at the Palm Beach County home where he is living with a family friend, and he is not to visit his brother in jail.

Also Tuesday, the sheriff’s office filed for a risk protection order against Zachary Cruz in circuit court under a new “red flag law” that was just signed by Florida’s governor last week. If a judge approves the request, Cruz would be involuntarily hospitalized for a mental health evaluation and barred from possessing firearms.

Zachary and Nikolas shared the same biological mother but had different fathers. Both were adopted at very young ages by Roger and Lynda Cruz, who moved them into their Parkland home. Lynda Cruz died in November and their father died some years earlier.

Zachary Cruz, who turned 18 a week after the shooting, has been living in Lantana, Florida, with a family friend since their mother’s death.