Students at Marjory Stoneman Douglas High School in Florida walked out of their classrooms Wednesday and held a brief rally on the football field before making their way to makeshift memorials for their fallen classmates where they cried, embraced and passionately called for new gun control measures.

It was a month to the day after a former student wielding an AR-15 assault-style rifle strode into one of the school buildings and opened fire, killing 14 students and three staff members.

The Parkland protest was echoed in schools across the nation as students staged 17-minute walkouts — one minute for each of the shooting victims — aimed at pressuring federal lawmakers to enact gun control laws.

The rally came less than a week after Florida Republican Gov. Rick Scott, citing the students’ actions, signed into law a bill that raises the minimum age for the purchase of long guns, including assault weapons such as the AR-15. The bill also extends the three-day waiting period for handguns to long guns, and creates a program to enable some teachers or other school employees to carry guns.

For many of the students, the bill was a sign of progress, but didn’t go far enough. 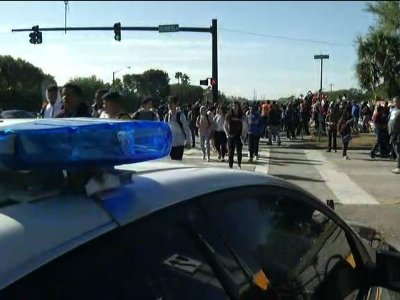 One month after a deadly shooting that pushed their school to the center of the gun debate, students from Marjory Stoneman Douglas High School take part in the nationwide school walkout against gun violence. (March 14)

“We are here to protest because we know that more can be done, not just statewide but nationwide,” said Stoneman Douglas junior Susana Matta, 17.

“This problem affects absolutely everyone and we will not stop until change happens. It’s been a whole month and we’re still out here protesting.”

The students are working hard to maintain the momentum of their movement; they know such persistence is necessary if they are going to persuade lawmakers at the state and national level to take more action.

“It’s been quite a journey,” Stoneman Douglas student Alex Goodchild said to his fellow classmate, David Hogg, who was livestreaming the event online. “My fear is that we’re going to lose the momentum on the national level.”

Students have organized a march on Washington for later this month, and since the shooting have taken trips to Washington and the Florida capital of Tallahassee to confront lawmakers.

On Wednesday, many Stoneman Douglas students left campus after the short rally, laughing and chanting as they walked. The mood immediately became somber when they arrived at a park about 2 miles (3 kilometers) away, where 17 memorial crosses ringed by flowers stood.

A dozen girls sat around one for Meadow Pollack, a senior who was slain in the Feb. 14 shooting. Others sobbed at the memorial for Aaron Feis, a popular football coach.

Sophomore Tanzil Philip, 16, grabbed a megaphone and led a group of students in a chant as he stood near 17 makeshift angels for the victims. “What do we want?” he yelled.

Alexis Grogan, whose friend Luke Hoyer was killed in the shooting, stayed home from school Wednesday, afraid of another violent incident, but was heartened by the support she saw on TV from around the country.

“It’s a very emotional day for me and I miss my friends too much,” the 15-year-old said via text.

For other Parkland students as well, the day was yet another reminder of the trauma that they and their community continue to process, and a chance to be together as they continue grieving.

“It is such a symbol of unity after such a terrible tragedy but also a symbol of change. … Today I was reminded of why we began this fight and why we are working so hard to make a change,” said 17-year-old Stoneman Douglas student Casey Sherman.

Find all of AP’s coverage on the walkouts and the Parkland, Florida, shooting at https://apnews.com/tag/Floridaschoolshooting