The former student charged with killing 17 people at a Florida high school last month remained silent in court Wednesday and had a not guilty plea entered on his behalf as police released more recordings that captured the terror of the Valentine’s Day slayings.

Nikolas Cruz, shackled and wearing red jail clothes, sat in the jury box with his head bowed and said nothing during the brief hearing. Because he refused to announce his plea, the judge entered it for him on each of the 34 counts he faces.

His attorney Assistant Public Defender Melisa McNeill reiterated that Cruz would plead guilty if prosecutors waived the death penalty, which they refused to do.

Cruz is accused of carrying out the massacre at Marjory Stoneman Douglas High School in Parkland, Florida that also wounded 17 people in a case that has reignited a national debate about gun control and school safety. It also prompted a nationwide walkout of thousands of students Wednesday, who showed solidarity with the Parkland students a month after the shooting.

As Cruz sat in the courtroom, more details of the shooting emerged as the Coral Springs Police Department released recordings of 911 calls and police radio traffic. 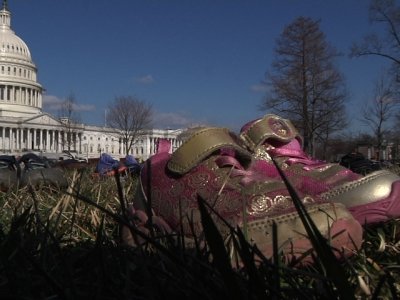 Thousands of empty pairs of shoes were lined up in front of the Capitol building on Tuesday morning by activists to represent children killed by gun violence in the United States since the Sandy Hook school shooting in 2012. (March 13)

In the recordings, students and dispatchers were uncertain about the shooter’s location and how to hide from him.

Some were frightened the gunman would return to their location when asked if they could perform CPR on the wounded.

Moments later, the girl starts screaming “They are coming in, oh no!” before discovering it was police officers who were entering the room.

A teacher from Room 1216 also called for help and told the 911 operator that a student had been hit in the chest, and wasn’t breathing.

“He’s twitching. There’s blood all over,” she said.

At one point, the operator warned that the shooter was still in the hallway, advising the teacher to keep the students still. “Stay down, he’s by your room, OK. Everyone be quiet.”

The police radio recordings showed that the Coral Springs police officers were the first to enter the school building after confirming that Broward County Sheriff’s Office deputies had not gone in.

As they clear each of the building’s three floors, the officers describe seeing shell casings on the floor and bullet holes in the windows.

They warned that the suspect may have changed clothes after they reported finding a camouflaged jacket, ski mask and backpack on the first floor.

On the third floor, officers said they found an AR-15 with a magazine still attached.

The officers found wounded victims and bodies, and they prioritized evacuating the wounded before allowing other students and teachers to leave. On the third floor, they said they shattered windows in some locked classroom doors because terrified students would not open doors.

Cruz was arrested a few blocks away from the school.

His next hearing is scheduled for April 11.