President Donald Trump on Tuesday eagerly inspected prototypes on display in California for his “big beautiful border wall” amid peaceful protests but growing tensions between his administration and the state over immigration enforcement.

Chanting “No ban! No wall!” demonstrators were cheered on by honking cars and buses at the San Ysidro port of entry in San Diego, the nation’s busiest border crossing.

Trump appeared engaged as he was briefed on eight towering prototypes, including one with blue steel on top. He said he liked a fully concrete wall because it was the hardest to climb, but he noted that it needs see-through capability.

He said certain parts of California are desperate for a wall to break the flow of illegal immigration.

“If you didn’t have walls over here, you wouldn’t even have a country,” Trump said.

The visit — Trump’s first to the state as president — coincided with an escalating battle between his administration and the liberal state, which Democrat Hillary Clinton easily carried in the 2016 presidential election. California officials have defiantly refused to help federal agents detain and deport immigrants in the U.S. illegally, and the Justice Department sued the state last week over three of its immigration laws. 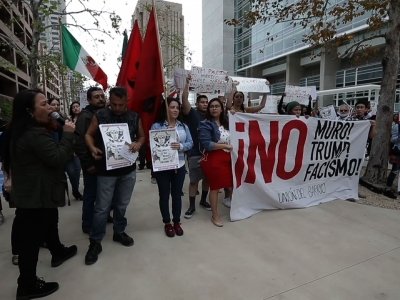 Numerous rallies both for-and-against Donald Trump’s “big beautiful border wall” are expected to mark his first visit to California as president on Tuesday. About 250 people protested Trump in San Diego on Monday. (March 13)

After viewing the wall prototypes in an area of the border heavily cordoned off and far from the rallies on the U.S. side, Trump was then expected to address Marines in San Diego before attending a high-dollar fundraiser in Los Angeles, where he’ll stay overnight.

Protests were held on the Mexican side, too, in Tijuana. Semitrucks were parked in between the row of prototypes and the border, blocking the view from Mexico.

Demonstrators said they planned to line up and greet people walking into the United States at the San Ysidro crossing to show Americans welcome immigrants.

José Gonzalez, 21, stopped to snap a photo of the protesters holding signs, including one that read: “Wall off Putin!” in reference to Russian President Vladimir Putin, who has a seemingly close relationship with Trump.

“I don’t think it’s really fair how he has the choice to separate us,” said Gonzalez, a dual citizen who lives in Tijuana and crosses the border daily to work at a San Diego ramen restaurant.

Army veteran Mark Prieto, 48, shook his head as he walked by the protest.

“People are so narrow-minded,” the Riverside firefighter said as the crowd chanted. “Finally we have someone who is putting America first.”

His wife, Corina Prieto, a nurse who has extended family in Mexico, agreed. Both voted for Trump.

“I think he is doing a lot of good, like protecting our Border Patrol,” she said.

Trump was expected Tuesday to be briefed on lessons learned from the construction of the prototypes built in San Diego last fall. He also will meet with border agents and officers to ask what they need, Homeland Security spokesman Jonathan Hoffman said.

The president also planned to talk about sanctuary cities, arguing that they are a major threat to public safety and national security, according to a senior administration official, who wasn’t authorized to speak publicly about Trump’s planned remarks and spoke to The Associated Press on condition of anonymity.

Faulconer, writing in The San Diego Union-Tribune, also said San Diego police work to protect everyone regardless of immigration status, an apparent dig at Trump’s push to target illegal immigration.

Trump tweeted about California’s immigration policies as he flew to the state aboard Air Force One.

“California’s sanctuary policies are illegal and unconstitutional and put the safety and security of our entire nation at risk. Thousands of dangerous & violent criminal aliens are released as a result of sanctuary policies, set free to prey on innocent Americans. THIS MUST STOP!” he wrote.

This isn’t Trump’s first visit to the border. He traveled to Laredo — one of Texas’ safest cities — weeks after declaring his candidacy in June 2015.

Trump told reporters then that he was putting himself “in great danger” by coming to the border. But, he said, “I have to do it. I love this country.”