Participants in a 1968 Los Angeles high school walkout to protest dropout rates and paddle beatings for speaking Spanish that ended up prompting a wave of Mexican-American youth activism say they hear echoes of their demonstrations in the voices of outraged students at Marjory Stoneman Douglas High School in Parkland, Florida, where 17 people died in a mass shooting.

“Just like we did, the students are taking a stand for their own humanity and they won’t be stopped,” said Yoli Rios, 67, who walked out of class 50 years ago.

Parkland students have held rallies, confronted elected officials and are promising to mobilize eligible youth to register to vote, all in an effort to push lawmakers for tougher gun-control laws. A national demonstration is planned Wednesday, when organizers have called for a 17-minute school walkout in memory of those who died last month.

“It’s amazing. They have that spirit we did 50 years ago,” said Bobby Lee Verdugo, 67, who is married to Rios.

The East Los Angeles protests began when Mexican-American students from different schools started speaking to each other about poor school conditions they all faced. Eventually, after school administrators refused to listen to their concerns, students at different high schools staged collective walkouts at the same time. 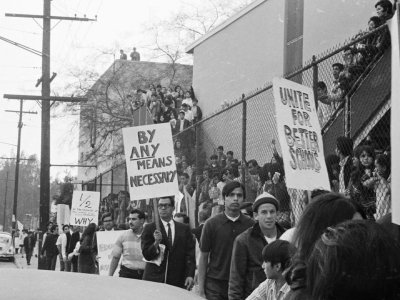 An organizer of the 1968 Los Angeles school walkouts that sparked a wave of Mexican-American youth activism says he sees similarities with Florida student activists seeking to change gun laws. (March 12)

A national outcry ensued after police beat peaceful student protesters with clubs and threw them on the ground before corralling the bloody teens on buses. Latino students in New Mexico and Texas followed with their own walkouts that historians say helped create the Chicano Movement and encouraged Mexican-Americans throughout the Southwest to run for public office and push for change.

“A lot of us were nervous. And scared,” said Carlos Munoz, Jr., a student protester and now professor emeritus of Chicano Studies at the University of California, Berkeley. “People were not used to being part of mass protests and things like that.”

Munoz was one of the 13 activists charged with disrupting the schools and faced 66 years in prison until the California State Appellate Court ruled that the charges against them violated their free speech rights.

Guadalupe San Miguel, Jr., a history professor at the University of Houston and author of “Let All of Them Take Heed: Mexican Americans and the Quest for Educational Equality,” said both the East Los Angeles and the Parkland movements were sparked by a feeling of desperation by students who felt no one was listening.

“At some point…the students realized their efforts had been in vain and they needed to take more radical steps,” San Miguel said.

Like with the Los Angeles walkouts, Rios said she sees parallels with how some have tried to discredit the Parkland students by calling their “crisis actors” or plants.

“I remember someone going on TV and calling us Communists and said we were influenced by some little red book,” Rios said, referring to Chinese Communist leader Mao Zedong’s writings. “I had no idea what that was so I went down to Chinatown and got myself a copy out of curiosity.”

Munoz said social media is helping the Parkland effort in ways the students in East Los Angeles never could have imagined.

“With all due respect to my generation back in the 60s, the kids today are much more articulate,” Munoz said. “My God, I was so impressed by these young people that were confronting people like (U.S. Sen. Marco) Rubio on television and in public places and confronting the president of this country … (the) voice is strong, it’s vibrant and I’m very optimistic.”

One Parkland student, Emma Gonzalez, has catapulted into the national spotlight for her passionate and strident appeal for change.

After Verdugo saw Gonzalez on television at a Florida rally angrily criticizing politicians who take campaign contributions from the National Rifle Association, he posted her photo on Facebook next to a picture of his wife as 17-year-old.

“She has the same energy of Yoli,” Verdugo said. “Nothing stopped Yoli, and nothing will stop Emma. I can’t wait to see what comes next.”

Associated Press writers Russell Contreras and Noreen Nasir are members of the AP’s race and ethnicity team. Follow Contreras on Twitter at http://twitter.com/russcontreras