Residents in the Northeast dug out from as much as 2 feet of wet, heavy snow Thursday, while utilities dealt with downed trees and power lines that snarled traffic and left hundreds of thousands of homes and businesses in the dark after two strong nor’easters — all with the possibility of another storm headed to the area.

With many schools closed for a second day, forecasters tracked the possibility of another late-season snowstorm to run up the coast early next week.

“The strength of it and how close it comes to the coast will make all the difference. At this point it’s too early to say,” said Jim Nodchey, a National Weather Service meteorologist in Massachusetts. “We’re just looking at a chance.”

At least two deaths were blamed on the storm.

Snow still was falling Thursday in places including Vermont, where storm warnings were in effect until the evening.

More than 800,000 customers were without power in the Northeast, including some who have been without electricity since last Friday’s destructive nor’easter. Thousands of flights across the region were canceled, and traveling on the ground was treacherous. 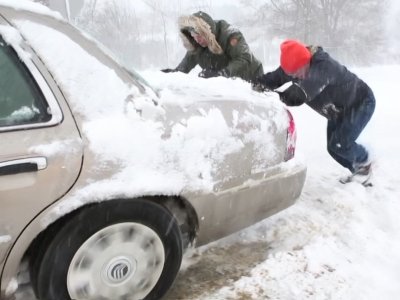 Residents in the Northeast dug out from as much as 2 feet of wet, heavy snow Thursday, while utilities dealt with downed trees and electric lines that left hundreds of thousands without power after two strong nor’easters in less than a week. (March 8)

A train carrying more than 100 passengers derailed in Wilmington, Massachusetts, after a fallen tree branch got wedged in a rail switch. Nobody was hurt. Tory Mazzola, a spokesman for Keolis Commuter Services, which runs the system for the Massachusetts Bay Transportation Authority, said the low-speed derailment remains under investigation.

In New Hampshire, Interstate 95 in Portsmouth was closed in both directions because of downed power lines, leaving traffic at a standstill for hours.

Amtrak restored modified service between New York City and Boston on Thursday after suspending it because of the storm. New York City’s Metro-North commuter railroad, which had suspended service on lines connecting the city to its northern suburbs and Connecticut because of downed trees, restored partial service Thursday.

In Wells, Maine, the Maine Diner remained open even though much of the town was without power after the storm dumped a foot-and-a-half of snow.

“If people are going to lose power, then they need some place to go. We do everything we can to stay open and provide that service,” said Jim MacNeill, the restaurant’s general manager.

Steve Marchillo, a finance director at the University of Connecticut’s Hartford branch, said he enjoyed the sight of heavily snow-laden trees on his way into work Thursday but they also made him nervous.

“It looks cool as long as they don’t fall down on you and you don’t lose power,” he said.

The Mount Snow ski area in Dover, Vermont, received 31 inches of snow by Thursday morning with more still falling. The resort said the snowfall from the past two storms would set it up for skiing through the middle of April.

The storm was not as severe as the nor’easter that toppled trees, flooded coastal communities and caused more than 2 million power outages from Virginia to Maine last Friday.

It still proved to be a headache for the tens of thousands of customers still in the dark from the earlier storm — and for the crews trying to restore power to them. Eversource, an electric utility serving Massachusetts, Connecticut and New Hampshire, said it could take several days to restore power for everyone due partly to the challenge of clearing storm debris and repairing damage.

In Maine, Republican Gov. Paul LePage also closed state offices and encouraged residents to stay off roads “unless it is an absolute emergency.”

In New Jersey, the state’s major utilities reported more than 247,000 customers without power a day after the storm.

An 88-year-old woman in the New York City suburb of Suffern was crushed to death by a tree that fell as she shoveled snow Wednesday, and a man died Thursday in Franklin Lakes, New Jersey, when he apparently drove around cones warning motorists about a downed live wire and the vehicle caught fire.

A pickup truck driver who was struck by a snowplow Thursday morning in Lebanon, New Hampshire, also died. Police said an investigation would determine if weather conditions were a factor.