Climbers on North America’s tallest mountain may have to start packing out more of their poop after a researcher determined a glacier in which much of it has been dumped over the past decade probably is not decomposing the human waste.

For more than a decade, the National Park Service has required that climbers keep waste off the Alaska mountain’s surface. Mountaineers captured their poop in biodegradable bags held by portable toilets and pitched it into deep crevasses on the glacier.

However, Loso’s research indicates human waste never reaches the bottom of the glacier, will never be exposed to extreme temperatures and disintegrate, and likely will reappear downstream as stains on Kahiltna Glacier’s surface where melting exceeds annual snowfall.

Park Service officials say the dumping of human waste that does not decompose is not a practice they want to continue in a national park and a wilderness area.

“These changes are in direct response to the research,” Chris Erickson, a mountain ranger, said by phone from nearby Talkeetna.

The proposed regulations would allow mountaineers to drop waste in only one crevasse at high elevation. They would have to carry out the rest. 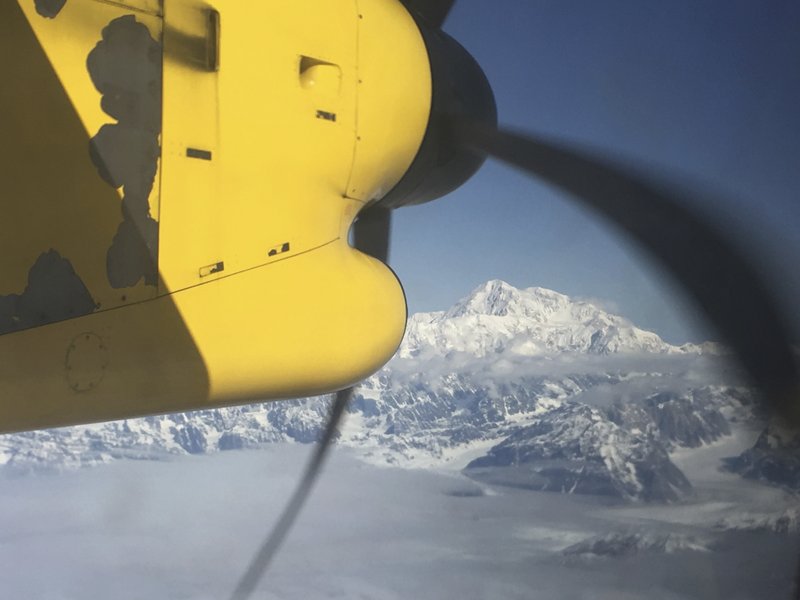 The view of Denali from an airplane flying over the Alaska Range. (AP Photo/Mark Thiessen)

Human waste is a concern on most mountains that attract multitudes of climbers, and the issue of poop littering the routes up Mount Everest in Nepal is well-documented. Some mountains are trying to minimize the human waste problem. In Japan, bio-toilets have been set up along the route to Mount Fuji’s summit, and incinerator toilets are at the top. In Tanzania, latrines have been built for climbers making their way to Kilimanjaro’s summit.

The waste can be more than just bothersome. Climbers on Denali, the centerpiece of sprawling Denali National Park, get all their drinking water by melting snow. And snow contaminated by human excrement can spread dangerous bacteria such as E. coli, causing climbers intestinal distress and diarrhea leading to dehydration, a life-threatening condition at high altitude.

Each year about 1,100 people try to reach Denali’s summit at 20,310 feet (6,190 meters). More than 90 percent use a route that starts from a landing strip for small airplanes on Kahiltna Glacier.

Starting in 2007, the Park Service required that human waste be collected in “Clean Mountain Cans,” a portable toilet invented by a Denali park ranger that looks like an extended coffee can. Under current rules, climbers between the base camp and 15,000 feet (4,572 meters) are allowed to toss filled liners into crevasses. Rangers even marked safe places to do so.

Loso for more than a decade has studied Denali human waste management to determine whether feces broke down, and if not, where it went. He buried human waste, dug it up after a year and found it remained at temperatures just below freezing, without undergoing temperature extremes or ultraviolet light that kills bacteria.

“For most bacteria, that’s a really comfortable place to be,” Loso said.

He forecasts that poop could emerge soon on the glacier surface 7 miles (11 kilometers) below the base camp, where the surface melts faster than snow accumulates.

The area is so remote, future visitors are unlikely to see the emerging waste, but Loso’s findings motivated the Park Service to re-examine its rules. The agency also doesn’t want pollution reaching the Kahiltna River, which flows from the glacier.

Under proposed rules, all Denali dung must be deposited in one of two places: the ranger station at Talkeetna or in a crevasse at “Camp Four,” a campsite at 14,200 feet (4,330 meters). Waste dumped there tumbles down a huge ice cliff and is likely to be pulverized and rendered inert, said Erickson, the mountain ranger.

Tom Kirby, a guide for American Alpine Institute, said his company supports any effort to get the waste problem under control.

“I think that’s a pretty reasonable thing to do to promote cleanliness and to keep water coming out of Kahiltna Glacier reasonably clean,” he said.

Colby Coombs, owner of Alaska Mountaineering School, which guides visitors on Denali, said he fully supports the Park Service balancing the safety of climbers, who want to move quickly through dangerous terrain without extra weight, while protecting a wilderness area within a national park.

“Who would like to see a big pile of human waste?” he asked. “That’s disgusting.