World leaders called Thursday for an urgent cease-fire in Syria as government forces pounded the opposition-controlled eastern suburbs of the capital in a crushing campaign that has left hundreds of people dead in recent days.

The U.N. Security Council heard a briefing from U.N. humanitarian chief Mark Lowcock on what he called “the humanitarian disaster unfolding before our eyes” in the rebel-held suburbs known as eastern Ghouta.

Sweden and Kuwait were seeking a vote on a resolution ordering a 30-day cease-fire to allow relief agencies to deliver aid and evacuate the critically sick and wounded from besieged areas to receive medical care.

He also accused global media outlets of a massive disinformation campaign that ignored what he claimed were thousands of fighters, including al-Qaida-linked militants, that were shelling Damascus from eastern Ghouta and taking refuge in hospitals and schools.

Council members said they needed to study the Russian proposals.

“We will try and find a way forward that works for everyone,” Sweden’s U.N. Ambassador Olof Skoog told reporters, adding that a vote was likely on Friday. 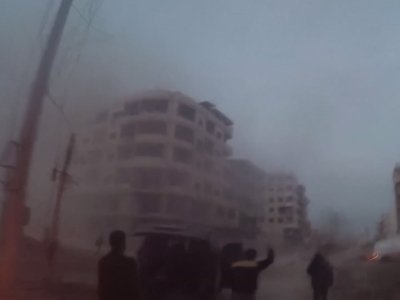 In eastern Ghouta, medical workers said they hadn’t been able to see their families for days as they worked round the clock at hospitals that have been moved underground to protect them from bombing, while their spouses and children stay in shelters.

“You can’t be above ground for even 15 minutes,” said a nurse in the town of Kafr Batna, who spoke on condition of anonymity to protect the identity of family members still living in government areas. “At any moment I expect to have to treat my relatives for wounds,” he said.

In the background the deep boom of a bomb could be heard exploding as the nurse spoke by Skype to The Associated Press. He said a barrel bomb had fallen less than half a kilometer (one-third mile) away.

A spokesman for the Syrian Civil Defense search-and-rescue group said eastern Ghouta was being targeted for “extermination.”

“This is a war against civilians,” said the spokesman, Siraj Mahmoud. “The civil defense is being targeted as they rescue women and children, evacuate civilians from targeted areas and put out fires.”

Four rescue workers of the organization, also known as the White Helmets, have been killed since Sunday, Mahmoud said.

The Britain-based Syrian Observatory for Human Rights monitoring group said 400 people, including dozens of children, have been killed since Sunday.

Al-Qaida’s Syria affiliate is not known to have many fighters in eastern Ghouta, and government forces on Thursday concentrated their fire on hospitals, ambulances, apartment blocks and other civilian sites, according to rescue workers, war monitors, human rights groups, and several videos emerging from the war-scarred region.

U.N. Secretary-General Antonio Guterres called for an immediate suspension of “all war activities” in the area where he said people were living “in hell on Earth.”

The Russian military is supporting Assad’s forces in the assault on eastern Ghouta, as it did in the 2016 campaign that drove the rebels from the enclaves they controlled in Syria’s largest city, Aleppo. Then, as now, it cited the presence of al-Qaida-linked groups as grounds for the sweeping operation.

German Chancellor Angela Merkel called on the European Union to step up pressure on Russia and Iran to end the violence in Syria.

“The regime is not fighting against terrorists, but against its own people, killing children, destroying hospitals, and this is a massacre to be condemned,” she told Parliament.

Besides President Bashar Assad, Merkel said “Iran and Russia have a particular responsibility” as they are both supporting the government forces.

“We need to do everything in our power to put an end to this massacre,” she said.

Lavrov said in remarks in Belgrade, Serbia, that an al-Qaida-linked group blocked a proposal by Russia’s military earlier this week to allow opposition fighters to leave eastern Ghouta in exchange for ending the government’s offensive.

That contradicted an assertion by one of the largest rebel groups in eastern Ghouta, which told the AP that Russia refused to allow al-Qaida fighters to leave in November, and accused Moscow of wanting to keep the fighters there as a pretext for a comprehensive military campaign.

Russian news reports said Moscow has beefed up its forces in Syria with additional warplanes, including its latest fighter jets. The Kremlin wouldn’t comment on the reports, referring questions to the military, which has remained mum about the deployment.

Russia has rejected allegations it was responsible for the mounting civilian casualties in eastern Ghouta, but anger has grown along with the death toll.

On Thursday, scores of protesters, including prominent Syrian opposition figures, gathered outside the Russian Consulate in Istanbul, Turkey, chanting, “Russia get out of Syria” and “Iran get out of Syria” in Turkish and Arabic.

Syria’s conflict, which has killed more than 400,000 people and displaced millions in the past seven years, has escalated in recent weeks as Assad and his allies push to retake remaining rebel-held areas in the country.

Turkey has also opened a new front against Syrian Kurdish fighters in the north, launching an air and ground offensive on the Kurdish-controlled enclave of Afrin last month.

Hundreds of pro-Syrian government fighters entered Afrin this week as part of an agreement with the Kurdish militia, known as the YPG, to bolster resistance to Turkey’s assault.

Turkish warplanes could be heard flying overhead, sending some fleeing the area.

The pro-government daily Al-Watan said some 500 pro-government fighters have entered Afrin since Tuesday, taking positions along the region’s borders.

“There needs to be a no-fly zone,” Mehmud said. “The Syrian army must protect Syrian lands.”

Turkey launched the operation to uproot the YPG from Afrin on Jan. 20, saying the group is linked to a Kurdish insurgency inside its own borders.