President Donald Trump struck a solemn tone Thursday after the deadly school shooting in Florida, describing a “scene of terrible violence, hatred and evil” and promising to “tackle the difficult issue of mental health,” but avoiding any mention of guns.

Taking up the now-familiar ritual of public consolation after terrible violence, Trump spoke from the White House Diplomatic Room. In a slow, deliberate style, he sought to reassure a troubled nation as well as students’ families and shooting survivors in Florida.

“We are all joined together as one American family, and your suffering is our burden also,” Trump said. “No child, no teacher, should ever be in danger in an American school.”

Trump, who owns a private club in Palm Beach, Florida about 40 miles from the town of Parkland, where the shooting happened, said Thursday he was making plans to visit the grieving community.

He did not answer shouted questions about guns as he exited the room.

The president’s address came a day after a former student opened fire at the Parkland, Florida, high school with an AR-15 rifle, killing 17 people and injuring 14 more. It was the nation’s deadliest school shooting since a gunman attacked an elementary school in Newtown, Connecticut, more than five years ago. 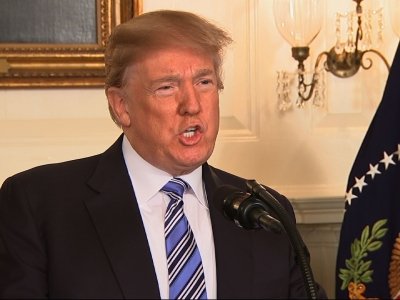 At the Capitol, the usual divisions over gun laws were evident.

House Minority Leader Nancy Pelosi, a California Democrat, said in a statement that it is time for action. “Congress has a moral responsibility to take common-sense action to prevent the daily tragedy of gun violence in communities across America,” she said. “Enough is enough.”

Senate Majority Leader Mitch McConnell, a Republican from Kentucky, did not mention guns as he said the Senate would observe a moment of silence at noon. “To say that such brutal, pointless violence is unconscionable is an understatement,” he said.

Before he was a candidate, Trump at one point favored some stricter gun restrictions. However, early in his administration, he told the National Rifle Association he was their “friend and champion.” He signed a resolution passed by the GOP-led Congress blocking an Obama-era rule designed to keep guns out of the hands of certain mentally disabled people.

Trump on Thursday praised teachers and first responders and also offered a direct message to children.

“I want you to know that you are never alone and you never will be,” Trump said. “You have people who care about you who love you and who will do anything at all to protect you. If you need help, turn to a teacher, a family member, a local police officer or a faith leader. Answer hate with love, answer cruelty with kindness.”

Trump also pledged that his administration would work with state and local officials to improve school safety and to “tackle the difficult issue of mental health.”

He later added that “it is not enough to simply take actions that make us feel like we are making a difference, we must actually make that difference.”

Trump, who did not speak publicly immediately after the shooting, weighed in on Twitter early Thursday, calling the suspect “mentally disturbed” and stressing it was important to “report such instances to authorities, again and again!” He tweeted about the shooting twice on Wednesday, expressing condolences and saying he spoke with Florida’s governor.

The president also issued a proclamation mourning the victims and ordering American flags at public buildings across the country flown at half-staff.

Trump has offered consolation before after horrific violence. A mass shooting in Las Vegas last year was the deadliest in modern history, with a gunman killing 58 people and injuring hundreds more, before killing himself. And a shooting in a Texas church in November left more than two dozen dead.

He has largely focused on mental health as a cause for mass shootings, dismissing questions about gun control.

After the Texas church shooting, the president said, “This isn’t a guns situation.” When he visited Las Vegas to mourn with the families of those victims, Trump called the shooter “demented” and a “very sick individual,” though he added that “we’ll be talking about gun laws as time goes by.”

Mayor Beam Furr said on CNN that the shooter was getting treatment at a mental health clinic for a while, but that he hadn’t been back to the clinic for more than a year.

While Trump has offered sober responses to some tragedies since he took office, he has also drawn criticism for more inflammatory reactions to acts of violence.

After the Orlando shootings at a gay nightclub that left 49 dead, he tweeted, “Appreciate the congrats for being right on radical Islamic terrorism.” In the wake of a deadly terror attack in London in June, he went after the Mayor Sadiq Khan on Twitter, suggesting he wasn’t taking the attacks seriously enough.