Philadelphia Cleaning Up After Some Unruly Super Bowl Celebrations

The vast majority of revelers celebrated peacefully, and police made only three arrests, said Ajeenah Amir, a spokeswoman for Mayor Jim Kenney.

“Tens of thousands came out and celebrated this amazing victory, and but for a handful of bad actors, the celebration was peaceful and jubilant,” Amir said. She lauded police for “their assistance in getting the crowds dispersed and people home safely.” 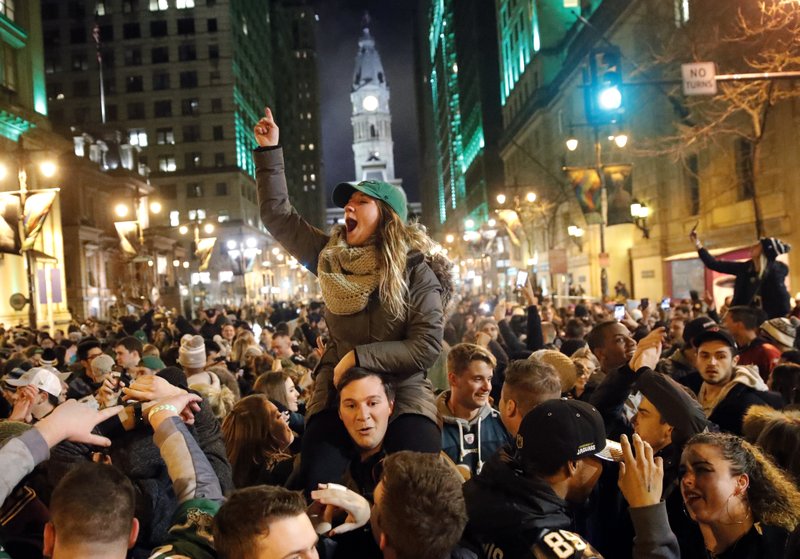 The victory parade is set for Thursday, and along the parade route, revelers can expect free Bud Light at 25 bars, thanks to a bet the beer maker made with Eagles offensive tackle Lane Johnson.

Just as Nick Foles and the Eagles clinched a surprising 41-33 victory over the New England Patriots in Minneapolis for the team’s first Super Bowl title Sunday night, the scene more than 1,000 miles away in Philly was jubilation and pandemonium.

As time expired, crowds spilled into the streets to celebrate the Eagles’ first NFL championship since 1960. 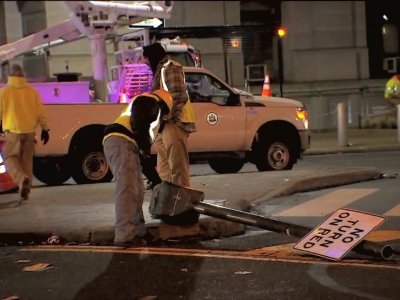 Revelers shot off fireworks, drivers beeped their horns and Philadelphians young and old descended on Broad Street, the main thoroughfare that last hosted a major championship parade in 2008 for the Phillies’ World Series win.

“The city deserved it,” said 66-year-old Lou Potel, who threw a party at his home just off Broad before joining a much bigger party outside. “It’s a great city, and now we have a Super Bowl to go along with it.”

The team was expected to arrive at Philadelphia International Airport on Monday afternoon.

Some of the pockets of unruly fans clambered atop the awning at the swanky Ritz Carlton Hotel near City Hall, jumping off into the crowd in what one Twitter post called “Ritz Carlton Skydiving.” The awning later collapsed with a large group of people on top of it. It’s not clear if anyone was injured.

Nearby, windows were smashed at a Macy’s department store and at an Old Navy clothing store.

And apparently no amount of grease in the world can keep some drunken Eagles fans from climbing poles in celebration. A few managed to shimmy up traffic lights and street sign poles.

Amir said there were reports of some injuries from falls near light poles but no exact numbers were available. 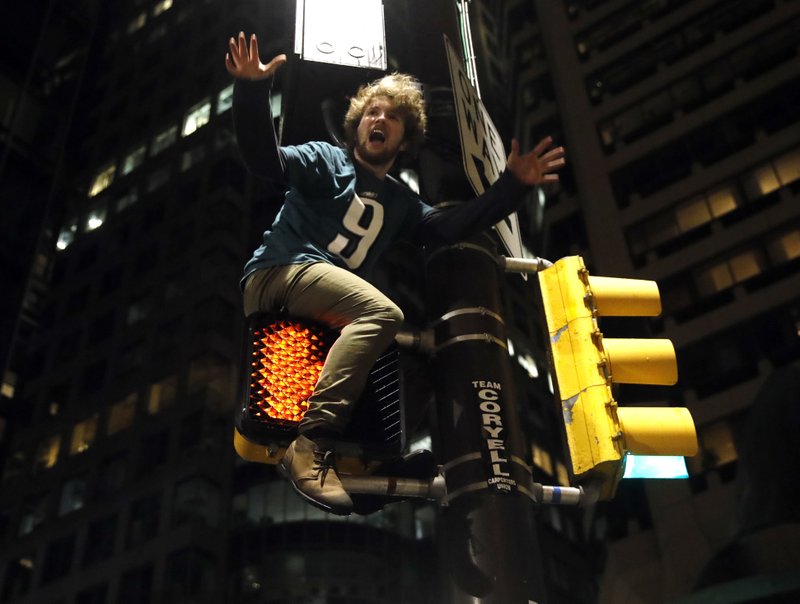 Vandals were seen having an apparent food fight inside a gas station’s convenience store, yelling “Everything is free!” and overturning a car outside a hotel. After 1 a.m., the only people allowed inside the 24-hour Wawa convenience store near City Hall were police officers.

Disorderly fans weren’t only found in the Philadelphia area.

Mourning the Patriots’ loss, fights broke out at UMass-Amherst and a crowd threw objects and set off smoke bombs and firecrackers, campus police said. Police used pepper balls to disperse the crowd.

Officials in the western Massachusetts town said those transported to hospitals suffered from head injuries, lacerations and alcohol intoxication. Police say those arrested face criminal charges, and students would face punishment under the student code of conduct.

In Boston, fans inside the Banshee Bar came to terms with a rare loss for Tom Brady. Some, however, took it in stride.

“I’ve got nothing to complain about,” Boston resident Bill Crowley said. “It’s the greatest dynasty in NFL history and this loss tonight doesn’t change that.

Sam Murphy, 40, actually made the trip from Boston to Philadelphia, flying in Sunday morning. The longtime Eagles fan and Boston resident joked he couldn’t be within 100 miles of his home, instead deciding to watch the game with his old University of Pennsylvania roommate.

“This is Philly at its best,” said Murphy, as he, his former roommate Rob Ballenger, and hundreds of other new friends paraded down South Street to get to the party on Broad. “This team is what Philly is all about.”