The unemployment rate remained 4.1 percent, the lowest level since 2000, the Labor Department said in its monthly jobs report Friday.

The pay gains show that employers are increasingly competing for a narrower pool of workers with the U.S. expansion now in its ninth year. Raises stemming from Republican tax cuts and minimum wage increases in 18 states also likely boosted pay last month. The figures point to an economy on strong footing, fueled by consumer spending and global growth. 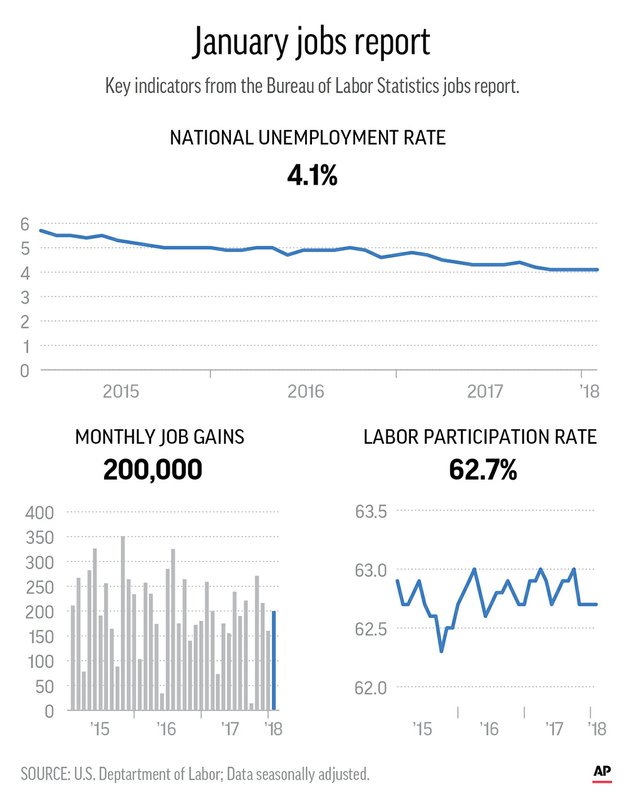 “Labor is becoming scarce, and employers have to work to find, retain and train employees,” Diane Swonk, chief economist at Grant Thornton, said. “This is new for many employers.”

The pickup in wages could make it likelier that the Federal Reserve will raise short-term interest rates more quickly in coming months. In anticipation of inflation pressures and of a possible acceleration of Fed rate hikes, investors sent the yield on the benchmark 10-year Treasury note surging after the jobs report was released. The yield reached 2.84 percent, from 2.79 percent before the jobs report was released.

Stock prices also plunged after the jobs report was issued, partly in response to the prospect of higher rates as well as to poor earnings reports from Google’s parent company Alphabet, Exxon Mobile and Chevron. The Dow Jones industrial average was tumbling more than 300 points in midday trading.

In January, average hourly pay rose 9 cents to $26.74 after an even bigger increase in December. Compared with 12 months earlier, wages are up 2.9 percent — the biggest gain since the recession ended eight years ago.

Weak wage growth has been one of the economy’s most persistent shortcomings for nearly a decade. But with fewer workers to hire, some employers are being forced to raise pay.

Many economists credit the Fed’s low-rate policies under Chair Janet Yellen with stimulating enough growth to bolster hiring and wages. Yellen’s final day at the Fed is Friday, and next week she will join the Brookings Institution. President Donald Trump chose not to offer her a second term and instead named Jerome Powell, a former investment banker and Fed governor, to be chairman of the central bank.

Tara Sinclair, an economics professor at George Washington University, said she thought the wage increases in the jobs report still support the case for continuing the Fed’s go-slow approach.

“Continuing with the policy of the Yellen Fed is the right one,” she said. “Slow, measured increases; don’t rush it too fast.”

Roughly 275 companies have announced bonuses and higher minimum wages since the Republican tax overhaul was enacted late last year and sharply cut corporate taxes. Most of those companies awarded one-time bonuses, which typically aren’t included in the government’s calculation of hourly pay.

A key question is whether last month’s gain can be sustained. Other reports also suggest that pay increases are picking up. A quarterly measure of wages and salaries in the private sector, released Wednesday, showed that they increased in the October-December quarter by the most in nearly three years.

Still, the gains aren’t equally spread. A separate measure of hourly wages that doesn’t include managers rose 2.4 percent over the past year, more slowly than the broader figure. That suggests that managers and supervisors have received the biggest benefits.

Most other recent economic data have also been encouraging. Factories, for example, expanded rapidly in January, according to a survey of purchasing managers, in part because a weaker U.S. dollar and solid growth overseas have boosted U.S. exports.

And many Americans appear confident enough to buy homes: Sales of existing houses reached their highest level in 11 years in 2017. At the same time, would-be buyers are struggling to find suitable homes because so few properties are available for sale. The demand for housing helped lift home building in 2017 to its fastest pace in a decade. Construction companies added 210,000 jobs last year, the most in two years.

Economic growth could reach 2.5 percent to 3 percent this year, some economists have forecast, which would top 2017′s pace.